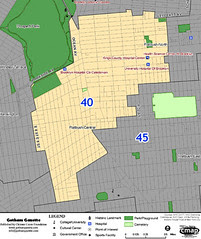 Next week, on Tuesday, February 20, there will be a special election to replace Yvette Clarke as Brooklyn's 40th District City Council Member. Clarke was elected to Congress in last year's elections. The council member elected on February 20 will serve only until the end of 2007. A general election in November will elect the member to serve the remainder of Clarke's unfinished term.

Last week I attended a Candidates' Forum on Preservation and Development. The Historic Districts Council, a sponsor of the Forum, has issued a Preservation Voter Guide.

There are several landmarked historic districts within District 40, and hopefully another soon. Still, most of the Victorian Flatbush neighborhoods are at risk of being lost forever due to inappropriate zoning and development.

NYC asks us to imagine What kind of city we want to live in by 2030. What happens to this area in the next decade will determine not only what happens by 2030, but this century and beyond. The neighborhoods of Victorian Flatbush are not only worth preserving, it's critical to the future of this area that we do so. It's not just about pretty houses, or property values. It's about open space and shade. It's about the rates of asthma and respiratory disorders. It's about moderating surface temperatures by preserving and managing the urban forest, reducing heating and cooling demands. It's about how many people will die in the heat waves we will experience by the end of the century. It's about the quality of life for the entire area, and whether or not it will be livable in the future.
This map shows the locations of schools and parks in City Council District 40. Schools are indicated with blue dots. The green labels identify the location of parks. Open space, including cemeteries, ball fields, and so on, are outlined in green. Prospect Park abuts District 40 on the northwest. The Parade Ground south of that is ballfields. Other than that, there is a near complete absence of parks within District 40. 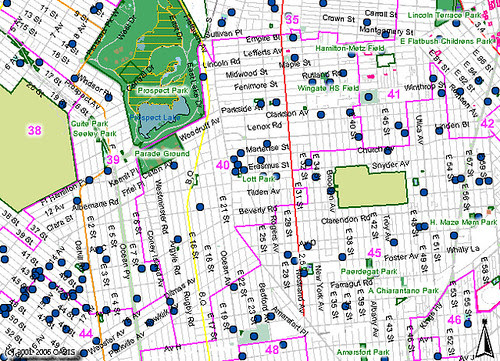 This map shows landcover classification in District 40. Dark green areas are trees and forest. Light green areas are grassland, fields and such. Everything else is classified "impervious", ie: buildings, streets, sidewalks, pavement, etc. 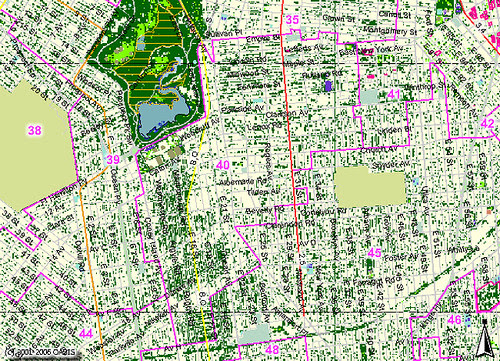 South of Prospect Park, note the interrupted band of dark green that extends to the south boundary of the District. These trees provide the only greenery and shelter in District 40. This area is the lungs of Flatbush.

Now we zoom in on my little neck of the woods, the Victorian Flatbush neighborhood of Beverly Square West. This map shows the outlines of buildings and the landcover classification. At this scale, it becomes clear that it is the trees on private property, not street trees, and certainly not parks or "open areas", that provide most of the tree cover. 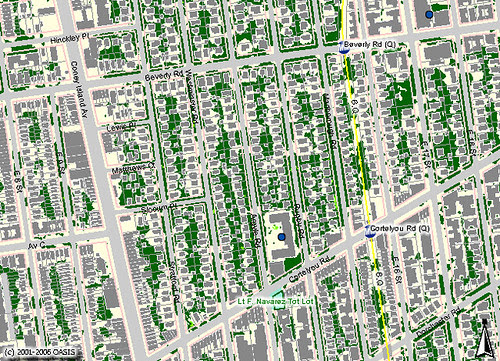 And this is what it looks like from the ground. These two photos show the view from the same street corner on my block, as it looks in Spring and Fall. 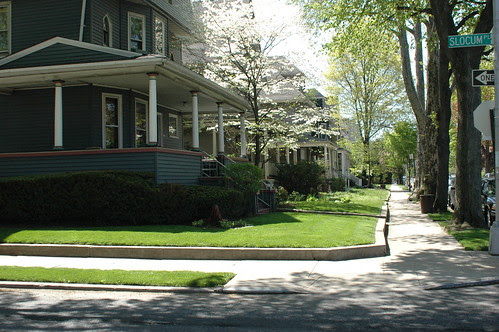 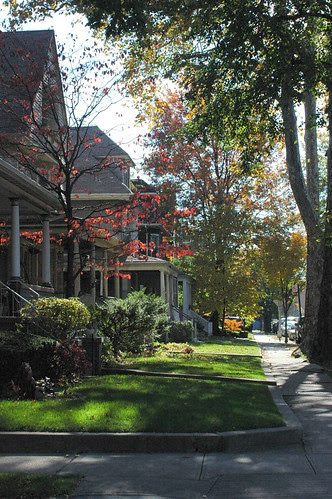 With no parks for blocks around, and few playgrounds, it's no wonder that parents come to our streets to stroll their babies and walk their children. It's the only green space within walking distance for many people.

What interesting maps... I might have to unt around and see if I can find any of those for Cleveland. It would be intriguing to see how much green is in the urban neighborhoods.