Update 2010.01.03: Corrected all links to the old Gowanus Lounge domain to the new memorial domain. 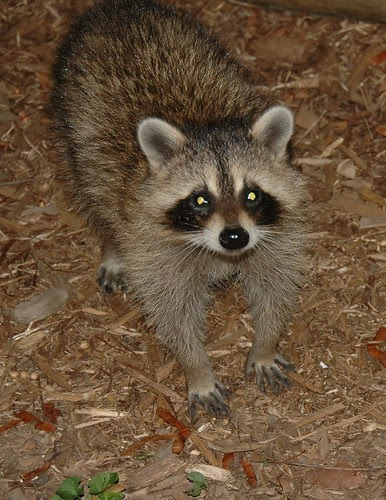 I know it's summer when the fireflies are out in force. As are the raccoons (Procyon lotor).

Both made their first appearance in the backyard about two weeks ago: just two fireflies, and just one raccoon. Tonight, multiple fireflies in everyone's yards, front and back. And a family of raccoons, as we get every year. I saw three little ones at once. I saw the adult separately.

Here are, I think, two of the young'uns, one in a tree, and one on the ground. It could also be the same young raccoon. The one in the tree climbed down, shortly after which the "other" appeared on the ground. 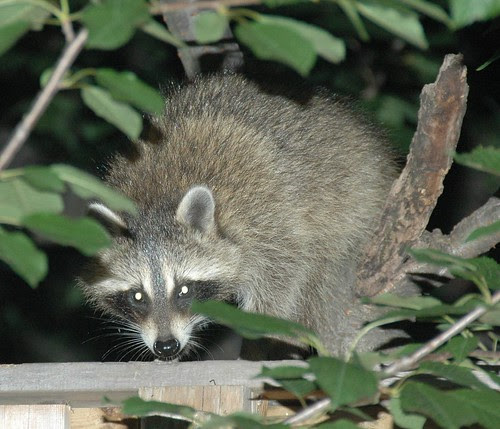 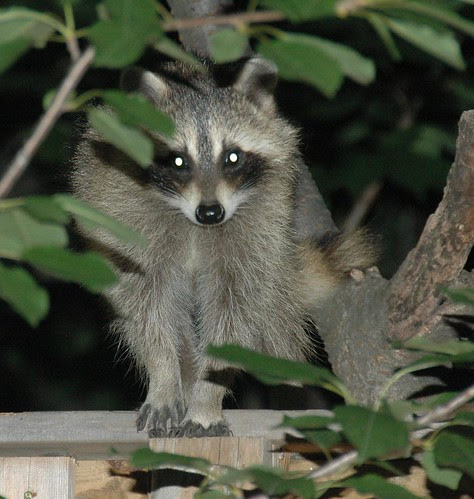 The groundling was very curious about my camera, and came within four feet of me before it realized the camera was attached to a person. 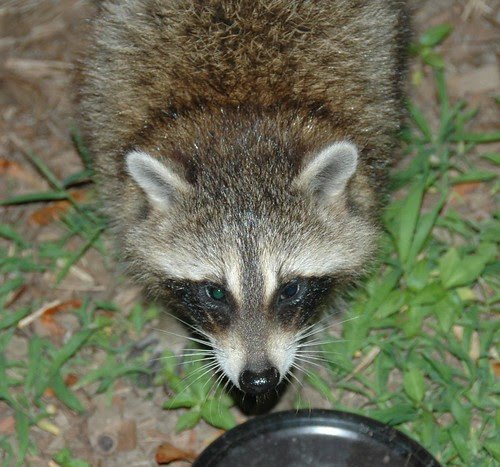 We love our Brooklyn raccoons!

They are annual visitors to our backyard. And our kitchen on the second floor. They climbed my neighbor’s apple tree to get there. They don’t scale building walls, they climb trees and other structures.

As for rabies, Brooklyn is the best off of all the five boroughs, with only 5 animal cases detected in the past 15 years; the most recent, in 2005, was a bat. Rabies is endemic in the Bronx and Staten Island.

Great shots of these little rascals!

Tru dat! These shots are excellent. But why are they wearing masks?!?

Ooooo, I love raccoons- it makes me so happy to see them and reminds me that we are living on what used to be farmland. Do they ever cause any damage to your garden?

Brenda: The one on the ground got really close to me. I had to back off the zoom to get those shots!

rob: The mammalian equivalent of anonymous trolls. Which are reptiles, as we know.

martha: I like 'em, too. And these babies are soooo cute. They're all fuzzy, like little shepherd puppies.

No garden damage, but then, I'm not growing any vegetables. They're more interested in my compost bins.

Dang, that is cute. I want one ! (My dog would NOT be happy)..I have seen another Flatbush critter, down this way near Glenwood Road & Avenue H, and kind of in the below ground wooded area near the railroad cut that runs perpendicular to the Q.. Anyway, it is much larger than a raccoon. First I thought it was a "hedgehog" but I stand corrected. Bulkier critter with a pointy nose..any idea?

Thank you for this Most Natural Post..pleasure to see fauna as well as flora on FG !

bb: Raccoons get really big, like 40 pounds or so. Maybe you're seeing a big raccoon? Does it have any markings at all? Groundhogs also get that big, but they don't have pointy noses. Can't think of what else it might be. Can you get a photo of it?

Most of my critters are insects. I get lots of birds and share them here, as well. Mammals are less common, and always get highlighted. I sometimes even write about gardening. :-)

Raccoons in the city can definitely reach 40 pounds. Last year just before dawn we spotted one in our neighbors backyard (we live near Green-wood Cemetery). My wife, who grew up upstate where there are tons of raccoons, couldn't believe how big it was.

The biggest one I've seen in the city was in my kitchen last year. I think proximity to Prospect Park, Greenwood Cemetery, or other "natural" areas makes for more frequent sightings.

Xris,
Head over to the Ditmas Park Blog and see the other wildlife around.
I posted a link to this/your post.

The hills are alive.

I live in Carroll Gardens and this is the first time in 13 years of living here that I haven encounterd a raccoon . We spotted one on our fire escape recently . It broke though my screen and got into my aparment. I seem to be in the minority here but I'm not really happy to see another addition to the local wildlife.

I wasn't too happy when we found one in our kitchen, either! He (big, so I assumed male) left without incident when we stood up and stared each other down.

They don't belong in homes. I'm happy when I see them, outside!