I don’t know what I can say to you that I’ve not already said.

In front of family, friends, neighbors, and community, I can say this:

Today is not a beginning – We began many years ago.

Today is not an ending – There is much more for us to explore together.

I am grateful, that having moved apart, our separate journeys prepared us to come together again, and see each other with new eyes.

I love you, more than I could have imagined I would ever love anyone.

Today is a milestone on the path.

I want always to travel that path with you.

"We began many years ago"
John and I first met nearly 30 years ago at one of the then-many, now long-gone, gay bars in the East Village.
"having moved apart"
Somewhere explained in an earlier blog post. I moved from the East Village to Brooklyn
"our separate journeys"
Both John and I have spoken publicly about being in recovery. Speaking for myself, I needed a lot of work.

We've been "together" for 17 years or so. (John keeps track of these things.) We've been living together for 14 years. A few years ago, as the possibility of legal marriage in New York state seemed increasingly likely, I "pre-proposed" to John. I told him that, if and when it became legal in our home state, I would propose to him. He initially objected, "What if I want to propose to you?!"

In the Summer of 2011, marriage equality became law in New York state. The next day, we had a voice message from a couple of our straight neighbors: "When's the wedding?!" All the pressure to marry came from straight friends and neighbors.

In the Fall of 2011, I ambushed John with a "surprise engagement." I secretly gathered family and friends, and proposed to John on our second floor porch. We shared dinner after at a nearby restaurant.

Many years ago, when our partnership had not yet been secured, I vowed to John: "I commit to exploring relationship with you." I maintain that vow.

Updated 2014-05-11: At the request of one of my readers, I started adding photos of the flowers.
Retracted Erythronium; I checked, and its petals have fallen. Hoping for seedset; I have plenty of ants to disperse them!
My backyard native plant garden is bursting with blooms right now. This is probably the peak bloom for the year. It happens to coincide with NYC Wildflower Week, which started today and runs through Sunday, May 18.

I will double-check this list tomorrow, but I think this is what I've got blooming:
Not all of these photos were taken this weekend, but here are some of the flowers appearing in my backyard. 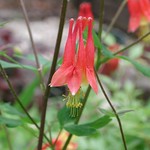 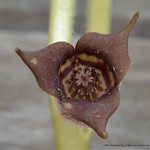 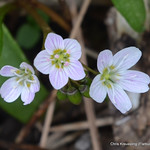 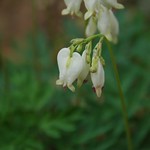 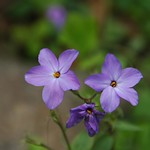