Update 2010.01.03: Corrected all links to the old Gowanus Lounge domain to the new memorial domain.
The close of the Robert Guskind Memorial Gathering at the Brooklyn Lyceum on Saturday, April 4, 2009 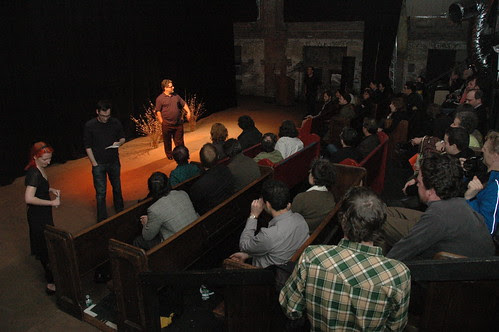 Last Saturday I attended the Memorial Gathering to celebrate the life and work of Robert Guskind and mourn his passing. A recap, with thanks to the many organizers and contributors, is on Gowanus Lounge. My contribution was baking 20 dozen cookies for the event: 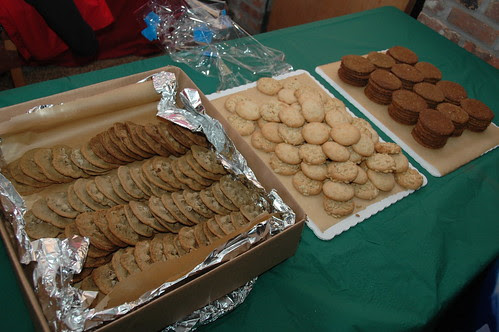 Steve Duke of Blue Barn Pictures compiled a video tribute of Bob's own photos, recorded interviews, and video footage. It was surreal to see him up there on the screen - There he is! - speaking to the camera, just like I remember him, as if it was a bad joke and he would step out and great us. Intellectually, I recognize that feeling as dissociation, a manifestation of denial, and part of the grieving process. That understanding doesn't diminish how it felt to be there that afternoon.

There were a lot of speakers. Some whose words stuck with me:
The event ran much later than I expected, well past the original 5pm scheduled end time. I stayed late to speak with others attending, and helped (a little) clean up.

When I RSVP'd, I indicated that I wanted to speak. Baking all those cookies was itself a kind of meditation. Line a cookie sheet, scoop out balls of dough, roll or shape them, place the tray, set the timer, remove the tray, remove the cookies, cool and wipe the tray. Repeat 20 times. So I had thought a lot about what I wanted to say.

But I hadn't written anything down until Miss Heather informed me that I would be second up to speak (I was third, I think). I scribbled some notes, and scrounged a wireless connection to lookup my own blog and copy some lines from my remembrance post. I'll try to recreate here some of what I spoke about.

I knew Bob only as "Gowanus Lounge," as he knew me only as "Flatbush Gardener." I related some stories about our early email correspondence, our few meetings. Mainly I talked about recovery, which - as I learned only after his death - was an important aspect of Bob's life, and something we had in common.

Two weeks ago was my 16th sobriety anniversary. But sobriety, or abstinence, is not the same as recovery. Recovery is not black and white, it's not binary. I got sober because drinking was interfering with my recovery, my need for which reaches from childhood with multiple, intertwined, roots. For me, sobriety was just part of my journey through recovery.

Recovery chooses life. Those choices take many different forms, as varied and creative as we are. Recovery is complex, and highly individual.

I don't know whether this is identification or projection, but I believe that Bob and I also shared a difficult relationship with community. Community can be a source of connection, and a source of betrayal. My model of recovery reflects that struggle:
Our online personae are lenses, which necessarily magnify some aspects of our selves while leaving others in the shadows. I've been online a long time, and I've developed some skill of inference from this medium. I only knew Bob from Gowanus Lounge. But from what I could see through that lens, I believe that Bob was choosing life, that he didn't want to do it alone.

I wish we'd had more time.


I hate seeing photos of myself. In my mind, I'm still young and thin. I'm neither these days. Here's a photo of me speaking at the Memorial, taken by one of the many other Brooklyn photo-bloggers and Gowanus Lounge contributors who also attended the event. 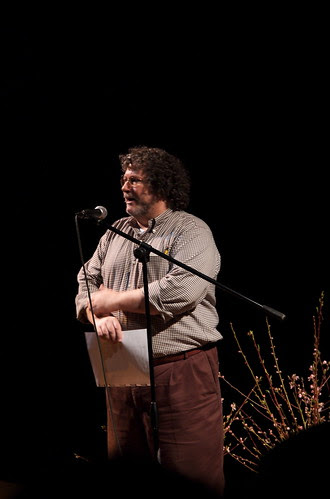 Your comments at Bob's memorial, esp. re community, were wise and deeply touching. The cookies were a beautiful tribute and a gift to all of us (and I know from baking as meditation). And, IMHO, young and thin are overrated; what the world needs more of is "seasoned and cuddly."