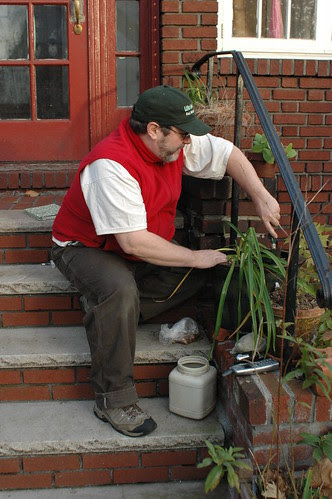 Today I planted bulbs in the front yard, including daffodils I received through the Beverly Square West Neighborhood Association, which were donated through The Daffodil Project. With this act, our front yard becomes part of a living memorial to those murdered on September 11, 2001.

The Daffodil Project was originally created to commemorate September 11. ...
The Daffodil Project is made possible in part by the generosity of a Dutch bulb supplier, Hans van Waardenburg of B&K Flowerbulbs, who has pledged to donate 500,000 daffodil bulbs to the project each year as long as there are volunteers willing to plant them. More than 20,000 volunteers have responded to his challenge so far. And thanks to their efforts, nearly 3 million yellow daffodils bloomed in over 1,300 individual sites across the five boroughs in the spring of 2006.
- The Daffodil Project, New Yorkers for Parks

... This act of immense generosity has been coupled with that of Joseph Temeczko, a Minnesotan handyman who willed his entire life-savings of $1.4 million to New York City, $300K of which will pay for the shipping of these precious bulbs for the following 5 years. Temeczko, who is said to have been a Nazi prison camp survivor, entered the U.S. through Ellis Island and lived for a time in New York City where he worked at the Statue of Liberty. Following September 11th, 2001, he redirected his estate "to honor those who perished in the disaster." An avid gardener, himself, he loved to share his garden's harvest with others, and passed away only a month later while working in his own garden.
- My Community Hero: The Daffodil Project, Claudia Herrera Hudson

Here are some more photos of me in the act this afternoon, graciously taken by my neighbor, Jeff Tolbert. (Since this is my photographic debut on my own blog, I decided not to upload the flattering butt-crack photos.) 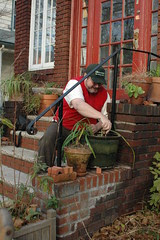 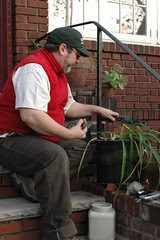 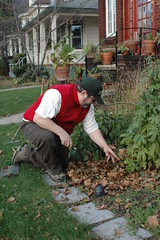 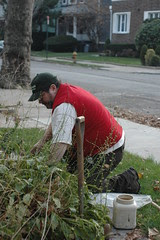 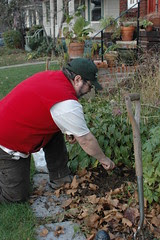 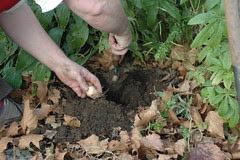 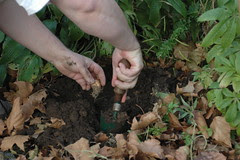 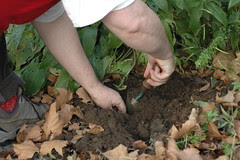