At the Chicago Botanic Garden, our first garden stop for Chicago Spring Fling 2009, I made a pilgrimage to the Native Plant Garden. I was surprised that most of the plants were familiar to me as Northeastern natives. However, I had never before encountered Geum triflorum, Prairie Smoke. I saw a lot more of over that weekend, but I saw it here first. 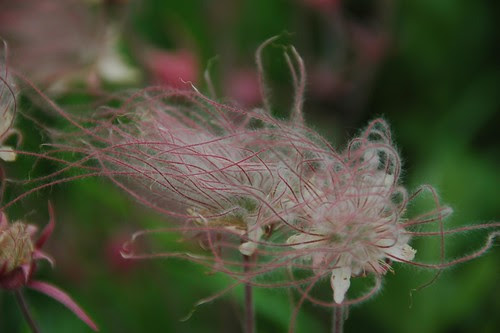 Even close up, it reminds me of trails of smoke rising from a candle wick that's just been extinguished. I bumped into the staff photographer who took the group shot of us just outside the visitor's center. I asked her what she liked in this garden; she said this was one of her favorite flowers. 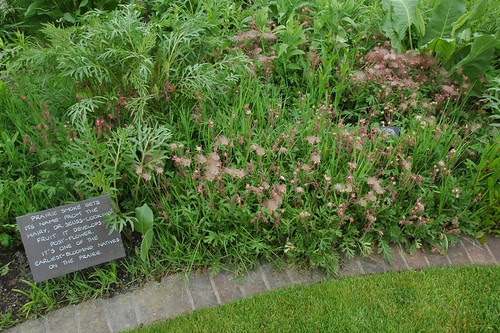 Most of the Baptisia were not yet fully open here as they were at the Lurie Garden we visited later in the day. They looked like grass eels rising from the lake bed. 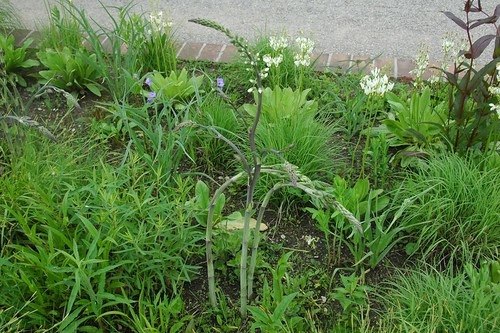 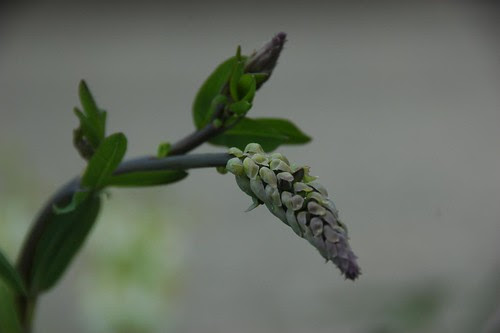 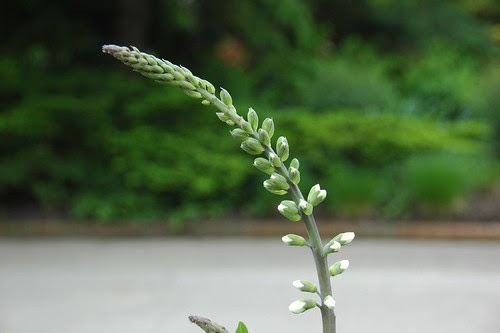 I did find one handsome stand of Baptisia australis. 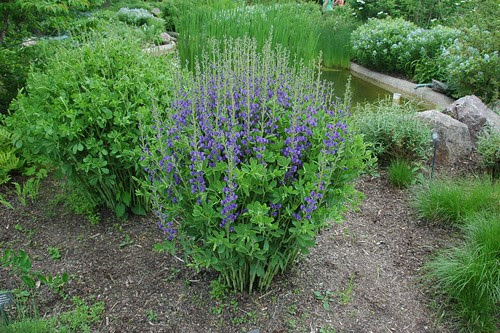 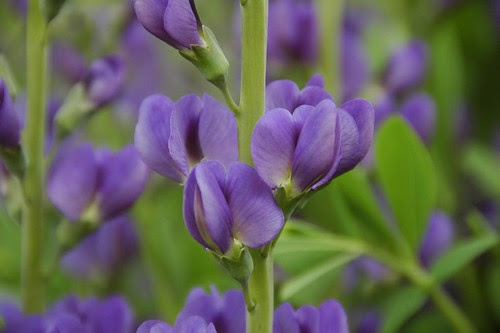 Another sinuous plant was this beautiful Carpinus caroliniana, Hornbeam. Another common name is Musclewood. It's easy to see why. 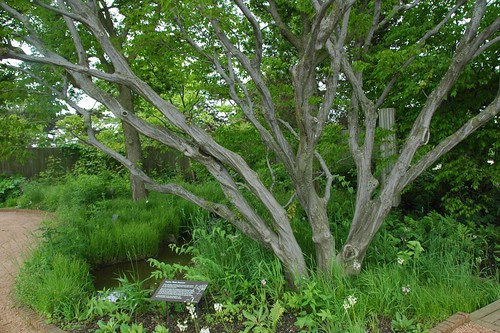 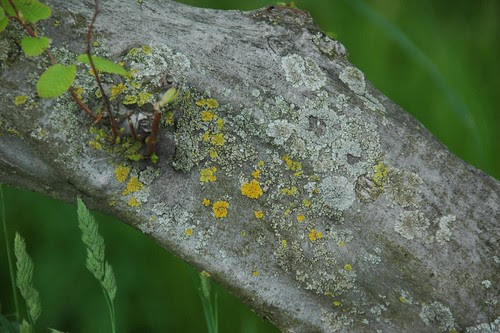 I find beauty in the green things, whose forms gain prominence. 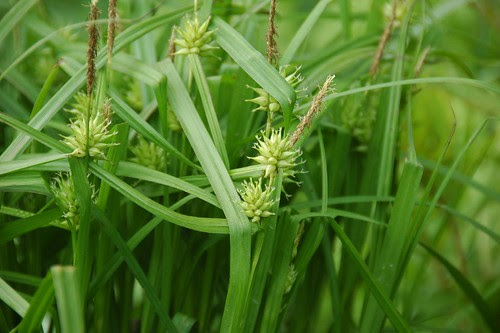 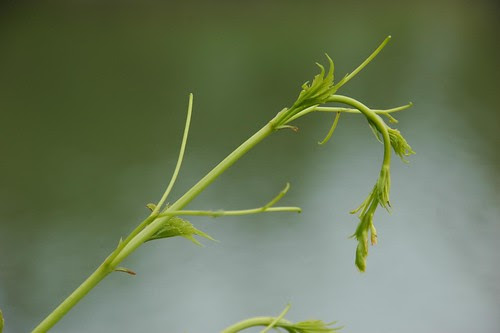 A grass I neglected to identify. 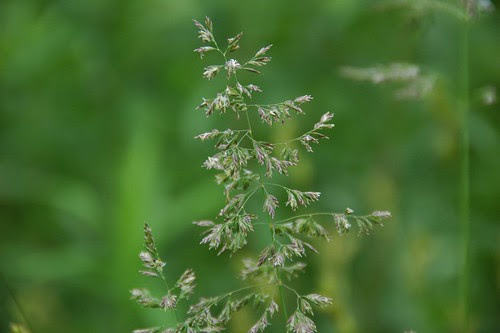 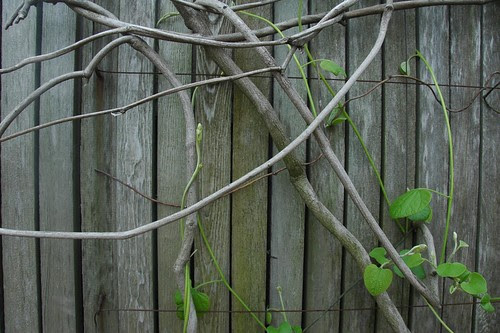 The big star when I visited was Dodecathon meadia, Eastern Shooting Star, an eastern woodland wildflower with which I am familiar. I grew it in Garden #1 in the East Village decades ago. During my Chicago visit, it appeared and reappeared in drifts, and in its full color range, from pristine white to pink to deep rose. 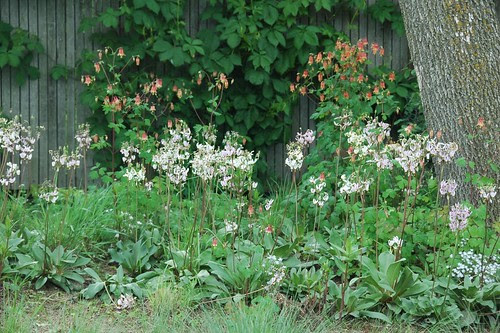 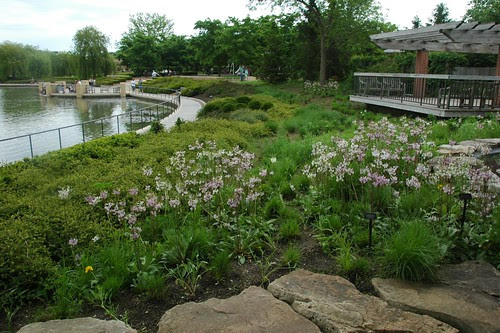 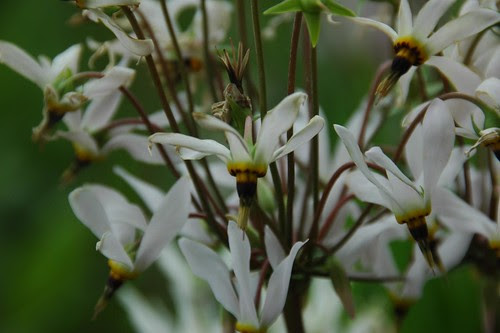 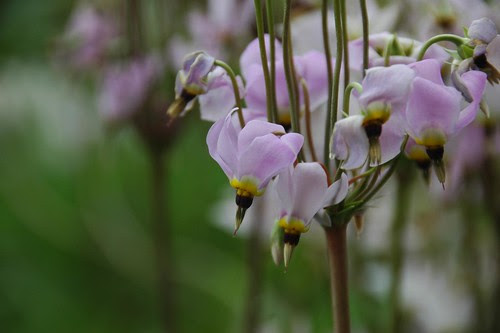 Thanks again for the excellent pics. I wish that I could have attended the event in Chicago, however, the photos make me feel that I was there :-)
There is an upcoming Garden Walk event here in Buffalo on the weekend of July 24 - 25th, 2009 that may be of interest to you.
You should check it out - the event is free and hundreds of gardens are on display. It is one of the main reasons that I moved to this area.

I've been aware of the Buffalo Garden Walk for a few years now. I would love to attend one year.

I did win the Garden Walk door prize that Elizabeth contributed at Chicago Spring Fling!

Xris, A beautiful photo of Prairie Smoke. I am so enamored with it I ordered several for the garden. Now if I can get it to survive the wet winters here. gail

Prairie Smoke is a neat little plant. In addition to those smoky plumes, in the fall, the foliage turns bright red, and it is evergreen, making it a 4 season plant.

Prairie smoke was the plant I was most enamored with in each garden we visited. I wish I could grow it here in Austin.

Prairie Smoke does look like a smoked out candle, and it has an element of romantic femininity. It is a really neat flower to look at that adds so much beauty.

great photo! i've grown that geum, and like other geums, it was unfortunately short-lived...

LINDA from Each Little World said...

Your description of the Baptisia stalks as eels is quite apt. I grew Baptisia in my old garden and did not immediately recognize it! Many wonderful images: the glam veggie shots, the panoramas and your green and gray images.

Great pics, FG! I visited this garden but did not examine it as assiduously. I liked it a lot though.

I've been enjoying your Flickr pics a lot. Time to plan a trip, I think.

Hi Xris, geum triflorum sure does look like smoke from an extinguished candle wick. Great picture. Nice to know that people take the time to admire nature in such intricate detail. And also the effort to share it with others …

Keep up the good work. Your blog will certain educate people to care for the environment better. I have tried to do the same in my site: http://climatarians.org.

The prairie smoke is just stunning. Your photo captures it amazingly. I have some baptisia in it's third year and it's finally looking like I'd hoped. Even more gorgeous than the flowers is the foliage that stays green and fresh all summer.