Save the Baltic Street Community Garden and P.S. 133

The Baltic Street Community Garden and the century-old gothic P.S. 133 school building in Park Slope are threatened by School Construction Authority (SCA) plans to raze both for a new school building. 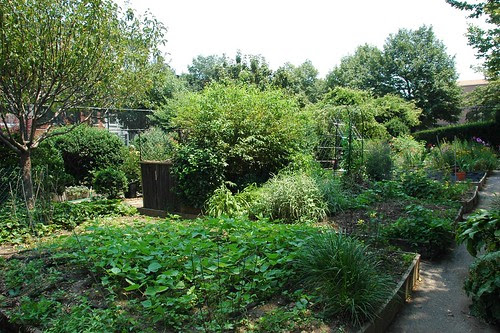 More details on the issues and what's at stake are below the fold.

What you can do:
To learn more, please contact us at baltic.garden@gmail.com

It has been determined eligible for the State and National Register of Historic Places, and a number of other Snyder schools throughout the city are already designated local landmarks, including Morris High School in The Bronx and the former Stuyvesant High School on East 15th Street in Manhattan.

Local residents are devastated by the notion of losing PS 133 and have developed alternative plans that would allow for the building to be preserved with an annex constructed to accommodate the additional seats. The SCA has expressed no interest in considering these alternatives and has neglected to include local stakeholders in any of the discussions surrounding the proposal.
- Park Slope Snyder School to be Demo’d by NYC School Construction Authority, Historic Districts Council, 2009-06-05

An online petition to save the century old PS 133 building and adjacent 30 year old community garden has been created. Please consider signing it if you have any concerns about the NY School Construction Authority's
proposal to tear down the current school building, and build a massive 960 seat school on the site of the garden and school playground. Construction is slated to begin in just a couple of months.

The proposal has been created in haste, without any input from the planned community immediately surrounding it, and without concern for the safety of the neighborhood. There is no plan in place for handling
the toxic waste that will be disturbed and dug up on the contaminated site. Traffic concerns due to the 660 seat increase have not been adequately addressed. Neighborhood residents feel that the lightning pace of this project should be slowed, and alternative plans be considered

The School Construction Authority wants to tear down the century old PS 133 bldg (which is wait listed for the landmark status) and the Baltic St Community garden to build a nearly 1000 seat new school on that property. There are so many reasons why this proposal is flawed including:

I vote for building a school. Not every 50+ year old building needs to be saved.

i agree completely to the fact that the school must be saved. i disagree to chris: not every 50+ year old building needs to become a huge towering non-fitting, building disruptive to the neighborhood. furthermore, there is a community garden right there. for 3 -4 years, the fully grown plants, trees, shrubs, and other living things must be taken in to the gardeners homes, and most will die. none of the people in the neighborhood have received letters or any communication from the SCA except for active people who have pressed very hard for information from the SCA. the others in the neighborhood have heard it from the flyers the active people hand-out or the participating committees.