This month, 23 raccoons in and around Central Park have tested positive for rabies. In addition, 11 animals tested positive during December 2009, bringing the two-month total to 34. 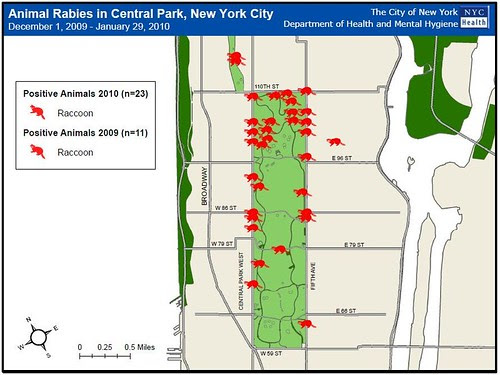 This increase may be the result of increased surveillance by the Health Department:


With the identification of three raccoons with rabies in Manhattan’s Central Park in recent months – two during the past week – the Health Department is cautioning New Yorkers to stay away from raccoons, skunks, bats, stray dogs and cats and other wild animals that can carry rabies. The recent cluster of findings suggests that rabies is being transmitted among raccoons in the park. The Health Department is increasing surveillance efforts to determine the extent of the problem.
- Press Release, 2009-12-07

Historically, raccoons are by far the most commonly reported animal, comprising about 3/4 of reports from 1992-2008. Raccoons are nocturnal, and should be active only at night. Anyone observing a raccoon active during the daytime, or any animal that appears disoriented, placid, or aggressive, should call 311 immediately to report the location. Animal attacks should be reported to 911. 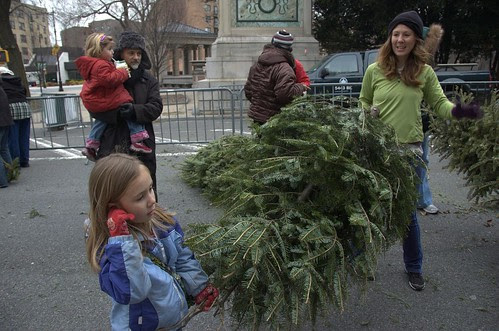 It's tree recycling season in New York City. Residents can have their trees recycled into mulch for the City's parks and gardens:
Residents can also pick up free mulch at designated chipping locations. Volunteers from Sustainable Flatbush, including your host, will be helping out at the Park Circle location of Prospect Park.

There were several personal milestones and achievements, my pleasure in sharing them tempered by the absence of my father this past year, who would have been proud.

The End of "Gowanus Lounge"

Gowanus Lounge had been the project of founder Robert Guskind, who died (too soon) in March of 2009. Archived content from Gowanus Lounge is now available at a new, "memorial" domain, bobguskind.com.

I'll be updating my links to the old Gowanus Lounge site to the new domain in his name. It saddens me to have to do this, but I must, since Bob's work is no longer available at the original domain. It's clear to me that the new proprietor of the domain expects to garner hits through links to Bob's old work. I refuse to support that.