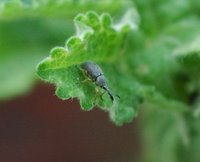 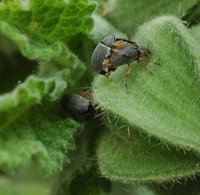 Apion (Rhopalapion) longirostre, Hollyhock weevil, on, of all things, my hollyhocks in the sunny border at Garden #4 in Flatbush. The upper photo shows a single male, I believe, on a leaf. The lower photo shows a pair in their typical posture, ie: mating. The female has her (even longer) snout buried in the flower bud.
Photos taken: June 4, 2006

The taxonomy of Apion (Rhopalapion) longirostre, common name Hollyhock weevil or (sometimes) Black vine weevil, is confusing. I've seen it listed as being in the Family Brentidae, the straight snout weevils, the Apionidae or Apioninae, and the Curculionidae. Whatever! They are in the order Coleoptera, the beetles.

The genus Apion seem to generally have long snouts. Their antenna are jointed and located halfway along the snout. A. longirostre is distinguished from other Apion species by its orange legs.

Their native range of A. longirostre is in Eurasia, originally limited to southern and southeastern Europe and Asia Minor. It has since spread much further afield there. It was first detected in North America in Georgia in 1914. Within fifty years it had spread across the continent.


They deposit their eggs in the ovaries of unopened hollyhock buds. The eggs hatch and the larvae develop within the ovary, eating the seeds. Within the still unopened bud, they pupate and emerge as fully-formed adults, chewing a hole from the inside out. Adults can winter over in the soil. They may also spread via hollyhock seeds.

This is my first encounter with this creature. I didn't notice them during the first year in this garden, though they were probably already present. The adults are easily spooked. They move constantly. When I approached them with my macro lens, they would hide deep in the buds and under leaves. The photos above were the only two good ones - ie: in focus on the weevils, not the plant - I got out of the series. Oh, and did I mention they mate constantly?

From what I can find out, they seem to be host-specific: they don't affect any other plants. Many, if not all Apion seem to be host-specific. A. fuscirostre, the Scotch broom seed weevil has even been intentionally introduced as a biological control for Spartium scoparium, Scotch broom. (Other weevil species are serious problems). There also doesn't seem to be any biological controls for them, whether insect, fungus or what have you. It's possible that some generalizing insect predator might be effective. All the literature suggests various insecticides, which I refuse to use. I'd rather just not be able to grow hollyhocks, if it comes to that.

Mechanical controls would seem to be the only option. They also tend to drop to the ground when disturbed, so that could be used against them by shaking them out onto some paper or other collector placed under the plant. I had been wondering why some of the hollyhock buds turned brown and papery before they bloomed. Weevils may be why. If so, then removing and destroying the unopened buds may also help control their population. I've also seen suggestions to either freeze the seedpods to kill the larvae (which would not affect overwintering adults), or open the seedpods and place them in the sun to drive out the weevils (my weevils were in full sun, so I don't think that would bother them enough to make a difference).

Note that there is another weevil, Otiorhynchus sulcatus, which also goes by the common name of Black vine weevil. It looks completely different. In particular, it does not have the long snout with antenna; it looks more like a regular beetle. It's behavior is also different. It does not lay eggs in flower buds; instead, they drop to the ground. Also, it feeds on multiple host plants. It's much more of a problem than Apion.

Xris - Nice weevil shots. They're always difficult to photograph.. particularly the little milkweed weevils which I see in the meadows around my place. As soon as they think they've been seen, they play dead, fall over and roll off the leaf to the ground. I rarely ever get a nice shot of them.. but plenty of shots of empty leaves.
I just posted a reply with a couple of extra notes about cameras, etc.. in response to your most recent comment on my blog. - bev

I'm going to try the old 35-70mm macro zoom I have before investing in anything new. The lens I covet is that new 105mm VR one. Even here in NYC it's $900 USD. It will have to wait a while longer.

Xris - Yes, that's probably the same lens that I've been looking at, but have talked myself out of buying. Perhaps if we wait awhile, they'll eventually come down in price! (wishful thinking). Btw, Wayne has left some camera notes on that same post about the hatching eggs.

Would dropping them or the affected buds in soapy water be effective? Works with lily beetles.

Cool post Xris! Lots of good information on these pests.