The Earth's seasons are caused by the rotation axis of the Earth not being perpendicular to its orbital plane. The Earth's axis is tilted at an angle of approximately 23.44° from the orbital plane; this tilt is called the axial tilt. As a consequence, for half of the year (i.e. from around March 20 to around September 22), the northern hemisphere tips toward the Sun, with the maximum around June 21, while for the other half of the year, the southern hemisphere has this honor, with the maximum around December 21. The two instants when the Sun is directly overhead at the Equator are the equinoxes.
- Wikipedia: Equinox 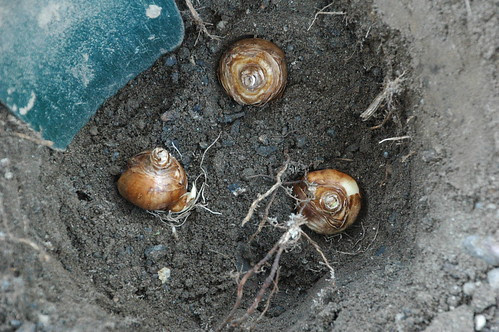 Today and tomorrow are the last two days to request Daffodil bulbs from New Yorkers for Parks for this year's Daffodil Project. Bulbs will be distributed in October. In Brooklyn, bulbs will be available for pick up on Saturday, October 23, from 8am-11am, at Grand Army Plaza at the Greenmarket Manager's tent near the white flagpole.

Updated 2010-09-14: Added links to news reports.
Note: The full press release claims that "there are more than 600 gardens across New York City." This in incorrect. The latest census lists only 482 gardens, 20% fewer than claimed in Parks' press release.

Parks Commissioner Adrian Benepe today announced the Parks Department has finalized its Community Garden Rules, which incorporate significant changes based on public comments made on the draft rules. The Notice of Adoption, including the full rules, will be published in the City Record on Monday, September 13, 2010 and take effect 30 days later.

Key changes to the proposed rules, led by Commissioner Benepe in concert with elected officials, community boards, and community garden organizations, were made in response to testimony from the community at a public hearing on August 10th, 2010 which was hosted by the Parks Department. They include:
...

Let's get the usual question out of the way. This is where I was the morning of September 11, 2001. 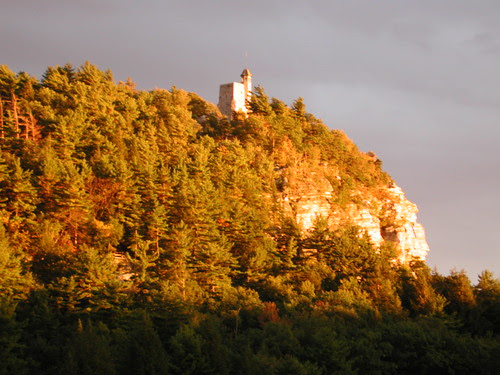 This is Skytop Tower at Mohonk Mountain House at sunset the previous night. Blog Widow and I had planned a week-long vacation upstate, starting at Mohonk. The morning of September 11, we hiked up to Skytop. A rustic retreat, Mohonk had no televisions or radios in the rooms. As we left the massive wooden structure to go out hiking, I noticed people huddled around the few televisions in some of the common rooms. I thought nothing of it at the time. I later realized we left just after the first attack.

The London Plane Tree in front of my house. 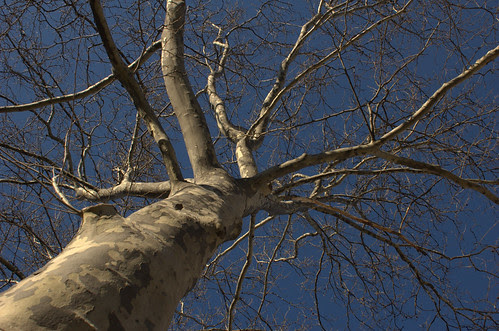 TreesNY's Citizen Pruner Tree Care Course is being offered in Brooklyn and Manhattan this season, covering basic tree biology, street tree identification and care. Upon successful completion of the final exam, participants receive a license that certifies them to legally prune trees owned by the City of New York. In New York City where there is limited money for tree maintenance but significant need, Citizen Pruners provide a tremendous benefit to our urban environment.

The twelve hour course consists of four weekly two-hour classes and four hours of hands-on experience in the field. Participants may miss up to one classroom session. The weekend field outing is mandatory. Specific dates vary by location. Locations and Dates for classes in the Bronx, Queens and Staten Island are still to be determined.

The course fee is $100 and includes a comprehensive manual and other materials. Course fee is non-refundable.You can register and pay online with Visa, Mastercard or Discover. To pay by check, make your check payable to Trees New York, and indicate the course location on the check