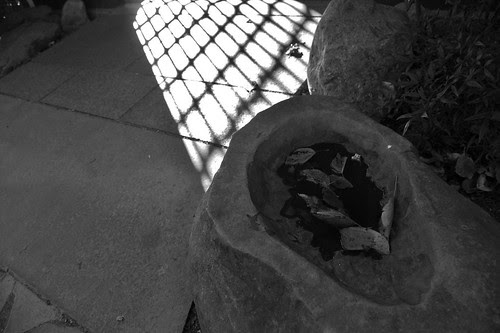 The Japanese Hill-and-Pond Garden was another station on my tour of the Brooklyn Botanic Garden on Veteran's Day with Blog Widow. What's the connection between Veteran's Day and BBG's Japanese garden? Its designer, Takeo Shiota, died in a U.S. internment camp during World War II.

There are different styles of Japanese gardens. The hill-and-pond style is intended to be viewed from a fixed point, in this case, the pavilion that reaches out over the shore of the pond. The stone basin above adorns the entrance to the pavilion.


It is a blend of the ancient hill-and-pond style and the more recent stroll-garden style, in which various landscape features are gradually revealed along winding paths. The garden features artificial hills contoured around a pond, a waterfall, and an island while carefully placed rocks also play a leading role. Among the major architectural elements of the garden are wooden bridges, stone lanterns, a viewing pavilion, the Torii or gateway, and a Shinto shrine.

The steep hills, representing distant mountains, are a maintenance nightmare: they cannot be mowed by walking a mower across them. Instead, the mower must be rigged to bypass its safety features, and carefully lowered and raised down and up the slopes using ropes controlled from the tops of the hills. BBG staff are gradually replacing the turf of the original design with slow-growing dwarf Ophiopogon, Mondo grass. These will eventually provide the same scale and texture as lawn without the hazards to life and limb.

One of the treacherous slopes along an idyllic path.

The view from within. 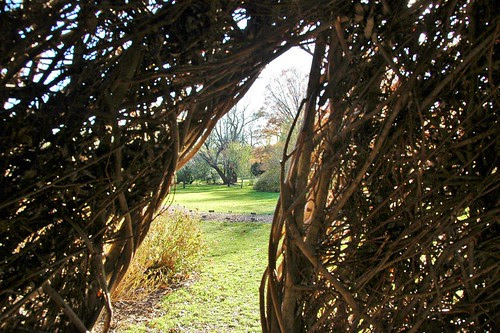 Blog Widow and I observed Veteran's Day by visiting the Brooklyn Botanic Garden. The Fall foliage was still brilliant, especially in the Bonsai Museum. My other must-see destination was "Natural History," BBG's first site-specific installation, by Patrick Dougherty. This was my first visit to the Garden since it was installed in August:


The sculpture at BBG is woven from nonnative woody material that was collected from Ocean Breeze Park on Staten Island. The harvesting site was chosen by BBG's director of Science because of its proximity to the Garden and its large population of nonnative willow (Salix atrocinerea), which is designated an invasive species in New York State. Removal of saplings of this species helped protect the site's excellent assemblage of herbaceous plants. The park is owned by the City of New York and is targeted for restoration under the City's PlaNYC sustainability initiative.

During a visit to BBG a year before beginning the work, Dougherty drew sketches and made word associations based on the feelings he experienced while exploring the potential work site. When asked about some of the words that came to mind as he contemplated what he wanted to build in Brooklyn, Dougherty smiled and said "lairs; a place for feral children and wayward adults."

The sculpture will be on display until August 2011, when it will be dismantled. It's going to look awesome in snow.


Detail of the fall foliage of a Moyogi (informal upright) specimen of Acer palmatum in BBG's Bonsai Museum. 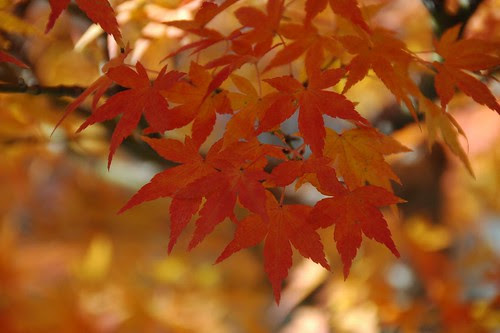 The Dogwood which my family sponsored, and I helped to plant, outside the 3rd Street Playground in Brooklyn's Prospect Park. 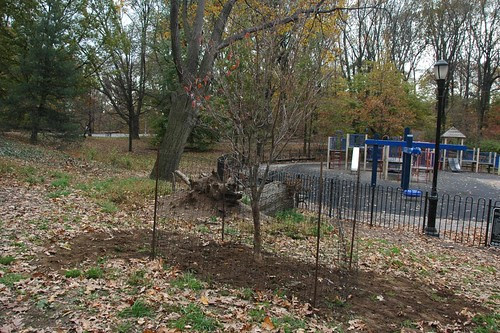 My father's birthday was November 2. He would have been 79. He died almost two years ago, early in the morning of December 1, 2008. I've been going back over what I wrote about his death. But the best thing to read, to get a sense of who he was, is in his own words: How Old Will I Be?

This morning, Blog Widow and I helped plant a tree in his memory in Prospect Park. The Prospect Park Alliance Commemorative Giving program provides opportunities to sponsor an existing tree or plant a new tree. There are no plaques or signs on the trees themselves or in the park; their Web site provides an online register, indexed by commemoration name, of the sponsored trees, their locations, and the season they were planted, going back to 1983. My father was born and raised in Brooklyn, so this seemed an appropriate way for the family to remember him.

My Dad's favorite tree was the native Dogwood, Cornus florida, so that's what the family selected to commemorate him. Luis Lemus, the Prospect Park arborist who coordinated this morning's planting, told me he purchased it from a nursery in Pennsylvania. Just three days ago it was in the ground. And now it is again. Luis was joined by his Parks colleagues, Eric and Jose. The three-man crew made quick work of planting. It was all over in a little more than a half-hour.

The location is lovely, just outside the 3rd Street Playground, behind Litchfield Villa. Prospect Park lost hundreds of trees over the past year, in a winter storm, and this summer's tornado-macroburst storm. A few large trees were taken down in this location, opening up the canopy. Countless thousands of park visitors, a few of whom we met and spoke with during the planting, will enjoy this tree for decades to come. 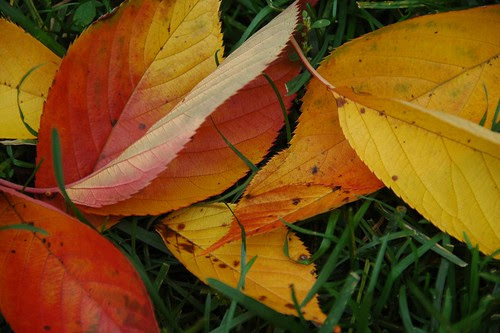 For the second year, a city-wide coalition of community gardens and other groups has organized Project LeafDrop to collect leaves from residents for composting. Again this year, most of the drop-off sites are located in Brooklyn. Check the map for locations near you, and the dates and times of your preferred locations.

Flatbush area residents have three exciting new options: community garden and composting sites which didn't even exist a year ago, for last year's LeafDrop! Sustainable Flatbush is collecting leaves this Saturday, November 6 and next, November 13, from 11am to 1pm at East 21st Street and Kenmore Terrace, at the site of the new Communal Garden in partnership with the Flatbush Reformed Church, the Flatbush CSA, and the Brooklyn Botanic Garden. Compost for Brooklyn, at Newkirk Avenue and East 8th Street in Kensington, and Prospect Farm, in Windsor Terrace, and also new.