2015-09-19: Added Homeosoma, observed 10 days ago and just identified, bringing the total to 23.
2015-09-13: Two more Hymenoptera species identified from the last weekend in August: Bombus fervidus, golden northern bumblebee, and Gnamptopelta osidianator, an Ichneumon wasp. And a new Diptera species identified today: Hermetia illucens. That brings the number of species to 22.
2015-07-12: Added two I'd forgotten about: Orius insidiosus, and Anthrenus verbasci. That brings the number of species to 19.
These are the insect species I've discovered or identified in my garden for the first time this year.

Pyrrhalta viburni, the viburnum leaf beetle, or VLB for short, is native to Europe. It was first discovered in North America barely two decades ago, in Maine in 1994. Both larvae and adults eat leaves. Our native Viburnum species are extremely vulnerable; they aren't adapted to this species of leaf beetle. With ample food supply, and no native predators to control its spread, VLB has rapidly expanded its range since.


The viburnum leaf beetle, Pyrrhalta viburni (Paykull), is an invasive, non-native beetle that first appeared in New York along Lake Ontario in 1996, and has steadily spread across the state and down the Hudson Valley. It is a voracious eater that can defoliate viburnum shrubs entirely. Plants may die after two or three years of heavy infestation, particularly when larvae strip plants after hatching out in spring followed by heavy adult feeding later in summer.
- Viburnum leaf beetle invading NYC?, Cornell Horticulture Blog, May 2009

It's been in New York City less than a decade. In Brooklyn, I first observed the damage on Viburnum dentatum, arrowwood, at the Brooklyn Botanic Garden in May 2012. Last year, I found it in Prospect Park; by May, arrowwoods there were shredded. 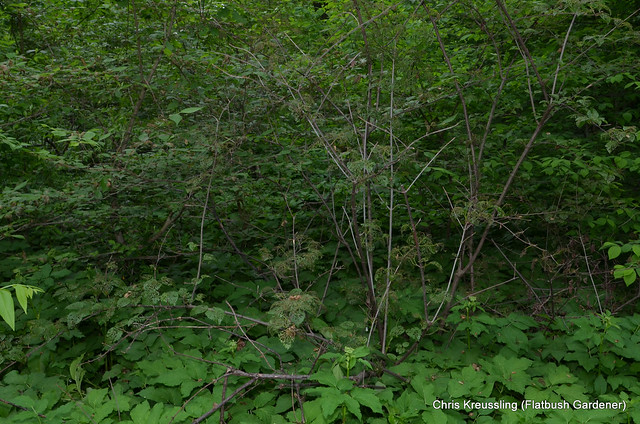