The Front Garden This Morning

Here's a bonus shot of the front garden I took this morning, with last night's snowfall still fresh on the ground. You can see the current "bones" more clearly here.

Today I received my 2007 Catalog of Signature Plants from the Brooklyn Botanic Garden. This is one of the benefits of BBG membership I anticipate every year and serves as one of the markers on the gardening calendar. (Another such event is the annual plant sale the first week of May, a feeding frenzy of plant lust I hope to blog about this year.) It always arrives in mid-Winter; we finally had Winter this season, with mid-day temperatures in the teens the past two days. The catalog's arrival reminds me that Spring is coming fast and I'd better start planning my garden renovations and acquisitions for the year.

Members contributing at the Signature level or above can select one or two plants from the catalog. Plants are grouped as Houseplants (tropicals hardy only to USDA Hardiness Zone 9 or higher), Perennials, and Trees and Shrubs. The listings describe 30 plants in just under four pages, with detailed information about the variety, cultural requirements, size, habit, and so on.

They also identify native plant species and cultivars. This year, they include:
Two years ago, they also offered local genotypes of species native to New York City, propagated in collaboration with the Staten Island Greenbelt. This is something I wish they would do every year. There are no commercial sources of locally-propagated plants available to the residential gardener.

Most years, I wait until late in the season to place my order, and never get my first choices. You, gentle readers, by your very presence, spurred me to email my first choices today. Here they are, with their catalog descriptions:

This antique shrub rose from China is celebrated for the chameleon-like color changes of its flowers (the "mutability" referenced in the cultivar name). Its cupped, single, slightly fragrant butterfly-shaped blossoms open a honey-yellow color, then turn coppery pink, then watermelon, then finally a rich mahogany. The floral display begins in May and repeats throughout the summer into fall. Orange hips form when the spent flowers are not deadheaded.

From the information I can find, this variety was introduced to the West from China "before 1894", so it's likely much older. It fits the criterion of being an antique/heirloom variety for the front garden. The size is right for this space; it will be easy to keep it low enough that it doesn't detract from the brickwork, or block the view from the windows. Planting it at the south end of the planting area will give it nearly full sun during the summer. The early bloom is another bonus; I'm hoping to get the front garden, at least, on the Victorian Flatbush House & Garden Tour next year; it occurs June of each year.

This smoke tree cultivar is grown for its unusual bright chartreuse-yellow foliage. The small, circular leaves retain their golden color until fall, when they develop magnificent tones of amber, burgundy, and scarlet. Smokelike grayish-green flower panicles appear in summer, typical of the species. An upright, loose-spreading, multistemmed deciduous shrub, 'Golden Spirit' works well as a single specimen or in mixed plantings. Grow it in average, well-drained soil in full sun.

I have this in mind for the south side of the house, along the driveway; you can see much of this garden in the Winter 2006 photo in The Front Garden Evolving. A large, deciduous shrub in this location will partially shade the south side of the house and provide privacy during the summer, when windows are open, and allow light in the windows during the winter.
Posted by Chris Kreussling (Flatbush Gardener) at 1/27/2007 08:30:00 PM 1 comment:

My parents walking towards the Japanese Garden at the Brooklyn Botanic Garden in November of 2005. 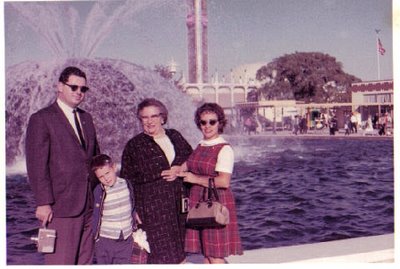 At the 1964 World's Fair in Queens, New York. From left to right: Dad, little Xris, my maternal grandmother, and Mom.

Doesn't my Dad look like one of the Men in Black? Were neckties ever really that skinny?!

Here's a series of photos showing how the front garden has evolved so far, from when we closed on our house in Spring of 2005, to this past fall. This is one of the four gardens - one for each side of the house - I've written about previously. This will be the heirloom garden. The house was built in 1900. I'll be relying as much as possible on plants which were available in 1905 or earlier.

This is what the front yard looked like when we closed on the house. Half the depth is devoted to a small lawn. The planting bed held a boxwood, two yews, a few hostas, and nothing else. There was not even a single daffodil bulb.

There was also a full-grown white cedar at the corner of the front porch. You can see its foliage at the upper-right of this photo. The cedar was beautiful, and huge - taller than the house - but it was in the wrong place. The trunk was pressing against the porch roof, so it had to go. It was obviously planted as a foundation plant decades ago, without regard for how tall it would get.

Here's a detail of the brickwork to the left of the front steps, in front of the mud room. Note the built-in planter on the porch wall. Another is visible in the photo above, and there's a third hidden behind the boxwood. One of my initial goals was to open up the plantings along the front of the house to expose and highlight the brickwork.

Here's the garden a month later. The boxwood and yews have been removed, as well as the cedar. You can now see the other planter, and the beautiful brickwork along the front of the house. The repetition in the windows and the horizontal lines of the brick details are more typical of Arts&Crafts than Victorian architecture. This is one of the reasons why I believe the front porch was enclosed early in the life of the house, and worth preserving.
On the right, the mulch on the ground is part of what's left of the cedar. I also kept four logs from the lowest section of the trunk. I'm using these now as seating in the backyard, which gives you some idea of the trunk this tree had. I hope to eventually incorporate the wood into something else for the garden.

And another month later, in June of 2005. There's some more plants which I moved from Garden #3. I put up the rainbow of silks to mark Gay Pride month.

Winter of 2006. I had started playing around with some containers in the front yard. You can also see the south side of the house, which doesn't have too much going on yet. And of course the old-school big-bulb Christmas lights and garland.

May of 2006. More planters, especially on and around the steps. You can see the last of the heirloom Tulips to the right of the steps. The silks have faded a lot from the previous year.

I started putting in some stepping stones to edge the lawn and planting area, both as a shortcut path across the lawn, and to guide my push mower.

September of 2006. Lots of containers now. I've finished the path across the front lawn, and put in some hose guides. The red and yellow flowers in the large terra-cotta pot to the right of the front steps is Canna "Cleopatra". The Hosta are blooming. The tall pink and purple flowers are Cleome, Spider Flower, I grew from seed given to me by a gardener from Long Island.

I'm still working my way across the front yard. One reason I haven't finished more is that we have to replace the roof this year. A complete tear-down, which means lots of debris on all sides of the house. Which means lots of smushed plants. Hopefully we can get the roof replaced early enough in the year that I can still get a good growing season in, and finish the front garden.

Photos of the exterior, grounds, and gardens of the historic Woodfield Inn [defunct] in Flat Rock, North Carolina. These photos are from October of last year and this past Saturday, when we threw a party for my parents's 50th Anniversary.

I could use some help from my gardening buddies in identifying the foliage, berries and plants. I'm not so good on woody plant identification.

On Thursday, February 8, from 7-9pm, the Historic Districts Council will host a Candidates' Forum on Preservation and Development at P.S 217, Col. David Marcus School, 1002 Newkirk Avenue, at the southeast corner of Newkirk Avenue and Coney Island Avenue.

The following details are from a flyer promoting the event.

This forum is an opportunity for residents, business owners and community members to hear candidates present their perspectives on preservation and development concerns. All questions presented to the candidates will be focusing on these issues, including questions of landmark designation, community rezonings, and building codes within the district.

The Coalition of Concerned Preservation Voters in the 40th District is a group of eleven neighborhood and civic organizations that are interested in preserving the unique character of the community. The Coalition believes we must reach out to elected officials and candidates and begin a dialogue about preserving the neighborhoods’ cultural, architectural and historical heritage.

For more information on this forum, please contact the Historic Districts Council
at 212-614-9107 or ftolbert@hdc.org.

"Mulch Ado About Nothing"

Mulchfest 2007 is on this weekend at locations all around NYC. During this annual event, Christmas trees are shredded into mulch for use in the city's parks.

NYC residents can drop off their trees at any of the locations. Trees must be free of any decorations: ornaments, lights, tinsel, and so on. At designated "chipping" sites, bring a sturdy bag and shovel and you can trade your tree for mulch. One of these sites is in Prospect Park, at 3rd Street and Prospect park West. Trees can also be left curbside for pickup.

(Don't blame me for the title of this post. It's a quote from Mayor Bloomberg.)

Just wanted to thank all of you who've been concerned about my absence from the blogosphere. This is a quick note to let you all know I am fine, and hope to resume again soon.

This week, I'm experiencing technical difficulties due to my fumbled attempt to add a new computer to our home network. When I have the time to resolve that, I should be again swamping all of you with voluminous posts and numerous photos.