More like building on the grave of BBG's science and research mission. This is not just "walking distance from the Botanic Gardens;" it's the former site of Brooklyn Botanic Garden's Herbarium, known as BKL.


The 22,000-square-foot plot at 111 Montgomery Street in the Crown Heights section of Brooklyn is hitting the market for a potential developer looking to likely build condominiums.

According to the NYC Department of Buildings, the property is 109-111 Montgomery Street. BBG quietly announced almost a year ago that they would be "disposing" of:


... BBG’s building at 109 Montgomery Street, which has foundation problems and is not cost effective to repair.

Indeed. The Observer article gives "an asking price in the mid-$40 million."

BBG's October announcement made no mention of the herbarium. In their "Freedom is Slavery" double-speak, they claim the sale as "the first step in reintroducing a science research program at the Garden." "Reintroducing" because BBG removed science from their mission in September 2013, with no announcement, just a month after firing their remaining science staff,

BBG planned to transfer the herbarium - again, without announcement - out of state, either to the Missouri Botanical Garden (MOBOT) or the Smithsonian. This would have been a disaster for the natural history and cultural heritage of New York state. It was only through last-minute, behind-the-scenes advocacy and intervention in March of this year that the New York Botanical Garden (NYBG) instead accepted the contents on loan. That move was completed in April.

In June of this year, BBG sold the property to the holding company, 109 Montgomery LLC, for $24.5 million.

According to the president of the brokerage handling the sale of the herbarium property, “There’s a real need for families moving into Brooklyn to buy apartments within the $1 to $2 million range.” But no room for science, at any price.

Sunday, while cutting up edited plants into my compost tumbler, I caught sight of something unusual out of the corner of my eye. It turned out to be Bombus fervidus, golden northern bumblebee, or simply, the yellow bumblebee. 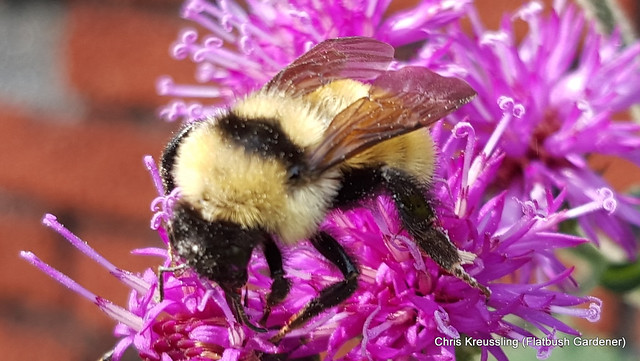 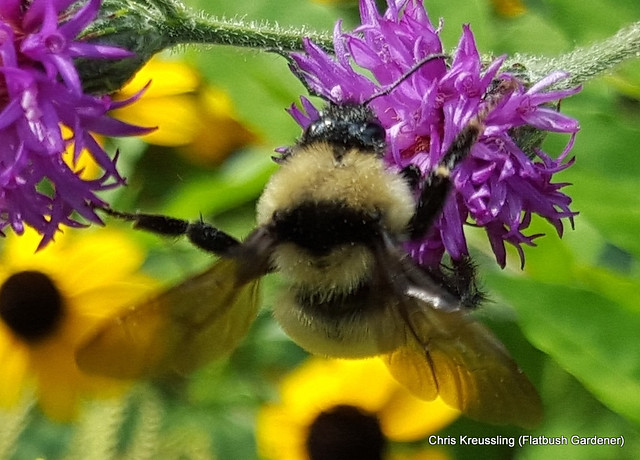