When we moved to our new home in Flatbush four years ago, my garden moved with me. Rather, the plants from my garden. All were planted hurriedly, with the intent of moving them "later in the season." In some cases, "later" has become four years later. Case in point: Viburnum dentatum, Southern Arrowwood. (Some botanists recognize a separate species, V. recognitum, Northern Arrowwood, for variants with smooth twigs.) 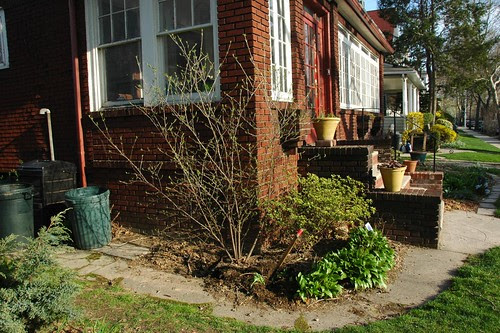 Very handsome, but not what I thought I had acquired. This individual was supposed to be V. dentatum 'Christom' (Blue Muffin®), a dwarf cultivar reaching 4-5 feet in height and 3-4 feet in breadth. (The species is highly variable, height can range from 3 feet up to a maximum of 15 feet.) It's now over 6-1/2 feet high and has extended across the narrow concrete path at its feet. So I can be forgiven some poor planning on my part that the plant has far exceeded its expected bounds.

I needed to move it from this location because it was blocking the path. However, in this location it was doing an excellent job of screening some "necessaries": cans and bins for garbage, recycling, and composting. And that suggested I could solve two problems at once by transplanting it to the backyard to screen the gardener's nook from the street.

Folks walking by on the sidewalk get a straight view into this corner of the backyard. I want this to be an intimate, sheltered location. 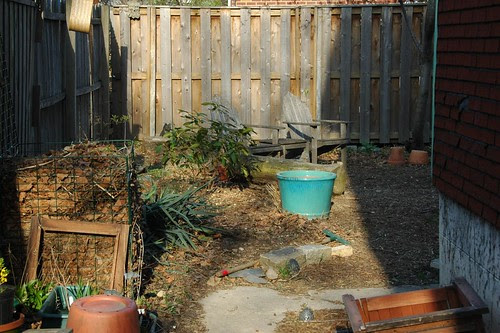 When I did the garden design for my backyard, I doubled the depth of the bed along the north edge of the property, visible on the left of the photo above and the plan below. 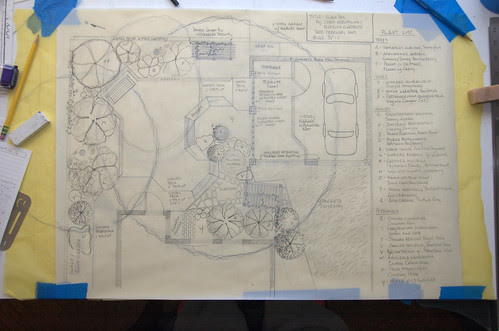 Earlier this season, I executed that part of the plan. On the right, the gardener's nook is located where the deck will extend to accommodate a bench, as shown on the upper left of the plan above. 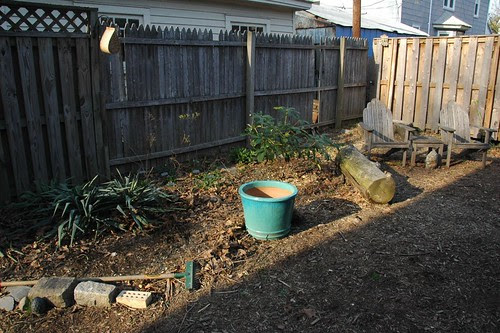 I transplanted the Viburnum to roughly the location indicated by the shrub marked "L" in the plan. I had specified Lindera benzoin, which I don't have, for that location, but the Arrowwood should do as well there. You can see that it does a great job of screening the view, even though it hasn't fully leafed out yet. During the summer, the nook will now be completely shielded from the street. 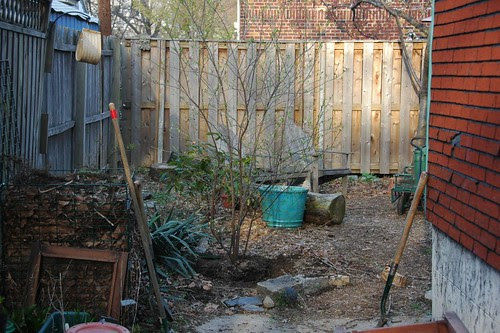 It also dramatically changes the character of the space. Compare these before and after shots. The backyard now has a sense of enclosure it didn't have before, even within the parts of the backyard that are not visible from the street. This validates a key strategy of the design: enclosing the space with shrubs to create the feeling of being in a woodland garden. 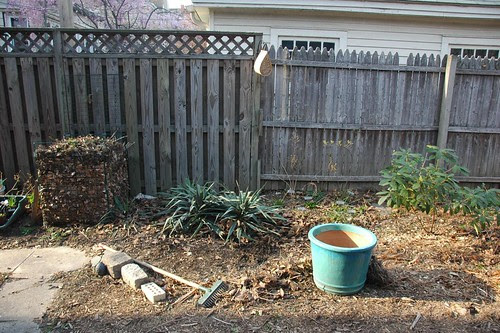 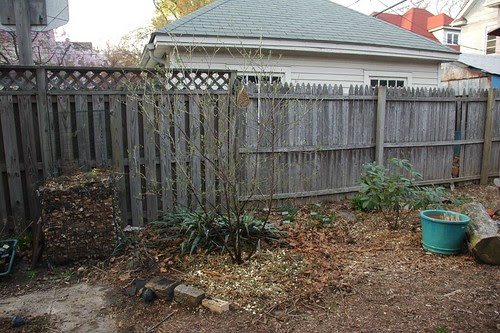 Viburnums are such great shrubs. Moving it to a better location making use of its attributes, rather than fighting them is great. Too often one sees shrubs cramped & mangled. The area looks good already with the addition of the shrub.

I'm wondering how your viburnum fared? I have a large (15hx8w) viburnum mis-planted by the previous owners--right in front of a much shorter dogwood, it looks bizarre. I'd like to move it to a better location, but am worried about its survival. Any input would be helpful. Thanks!

It fared beautifully, no doubt helped out by the ample rains we had this year. No fruit on it this year. Maybe next year.

I wonder if moving your Dogwood would be easier than moving an even larger Viburnum?!

I'm so glad your viburnum is doing well! Can I ask a couple of technical questions? How far back (if at all) did you trim the branches? How much of the roots did you take? Did you do anything else to help its transition?

PS The dogwood is well-placed and I think is too old too move successfully.

I pruned mainly to remove crossed branches. I pruned out one large branch that blocked the path next to its new location. As for roots, there were a few large, woody roots that I had to also prune, but otherwise kept the root ball intact.

To transplant your much larger specimen, I would prune the roots this season, slicing straight down at the extent of the branches. You could also prune 1/4-1/3 of the wood, either by cutting out large branches from the base, or cutting back the length of branches. You could repeat the process in the Spring, to prepare it for transplanting next Fall.