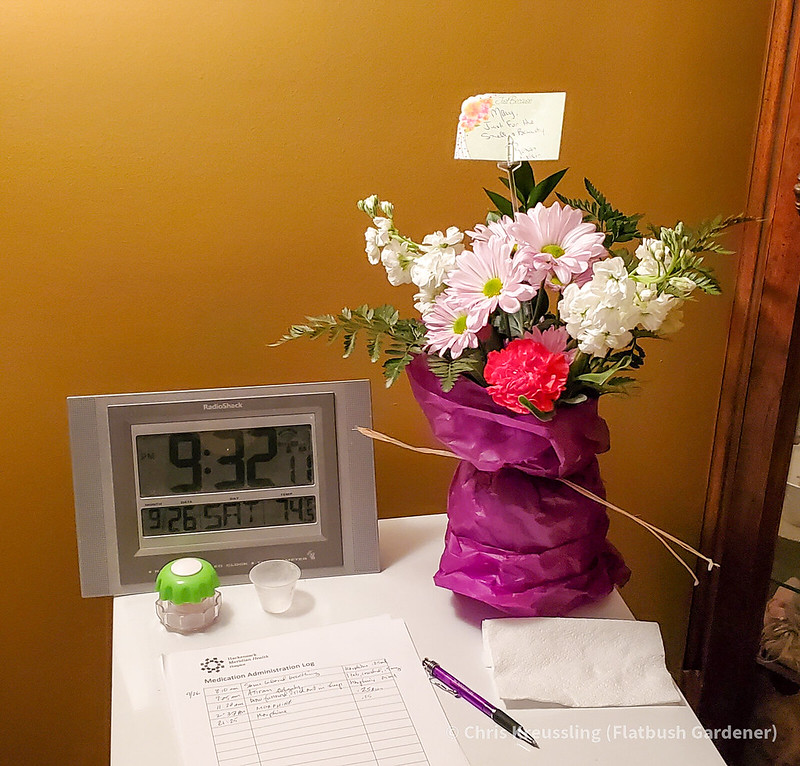 
I said my last goodbye to my mother today. I don’t think she heard me. I whispered, because I didn’t want to disturb her, and she’s hard of hearing as it is.

I don’t expect her to rally again. I don’t expect any more lucid minutes, or moments. I believe our mother is gone, but her body doesn’t know it yet.

The only time today she exhibited any arousal - not even awake, really – was when the home health aide came this morning and we changed her. She only accepted two syringes of thickened cranberry juice, and waved off the rest. She didn’t even wince when we pulled her higher up on the mattress, an act which was causing her excruciating pain just a few days ago.

She fell asleep after that. She slept all day. She still sleeps now. Her breath is shallow, but easy and regular.

It’s her third day not eating.


It’s two days later. Five days since she's eaten anything. It’s now been a week since we officially entered hospice. We are still just waiting.

She sleeps. She no longer has any even semi-conscious moments. Mornings had been the worst time for her pain. We’re still only moving her once each morning to change out her incontinence supports and make sure she’s not developing any compression injuries, i.e. “bedsores”. During this morning’s changeout, she had no reaction. She is gone. Her body just hasn’t caught up.

Still, I gave her another goodbye this evening. I held her arm and hand, the “bad” one, on the right side of her body, affected most by the cerebral palsy she was born with. Among other things, I said her hand was beautiful to me, that it always was. This goodbye was less tearful than Saturday’s. There is some acceptance in me, yes, but also I’m just exhausted.

When my father was dying, they drew up reciprocal documents naming each other as health care proxies, powers of attorney, and estate executors. When my father died, those roles and responsibilities transferred to me. There are some things we can do beforehand. Since my mother is no longer responsive, and can no longer speak for herself, I’m acting in accordance with her wishes.

We “check on her” adhoc, or whenever we pass by the room where she’s setup. She’s no longer restless or agitated in sleep, which is good. So for me, euphemistically “checking on her” means first looking to see if she’s (still) breathing. If so, I’ll check her temperature at her forehead, her hands, her feet, and adjust her covers accordingly. If her breathing is a bit labored, I may lower the head of the bed even further to reduce compression on her diaphragm.

At some point – soon, I hope – one of us will walk in on her and she will no longer be breathing. Whoever finds her, son or daughter, will tell the other. We will tear down the dams and release the rivers of grief we’ve been holding back. We will sob and weep, wordlessly holding each other, now just the two of us left in our little family. When we’re ready, I’ll start making the phone calls that will set us on our journey away from our mother.

I’ve already had the last conversation I will ever have with my mother. I’ve said all the goodbyes I can. I just want this part to be over.

You are ever in my mind during this time. You are a good son. Peace.