I'm an active contributor to iNaturalist. While I'm not a "super-observer", I expect to surpass 11,000 Observations by Halloween, two days away.

Insect-Plant interactions are the majority of my iNaturalist Observations. I use the Observation Field: Interaction->Visited Flower Of to record which flowers insects are visiting, or lurking upon. Roughly 1/3 of my Observations use that field. 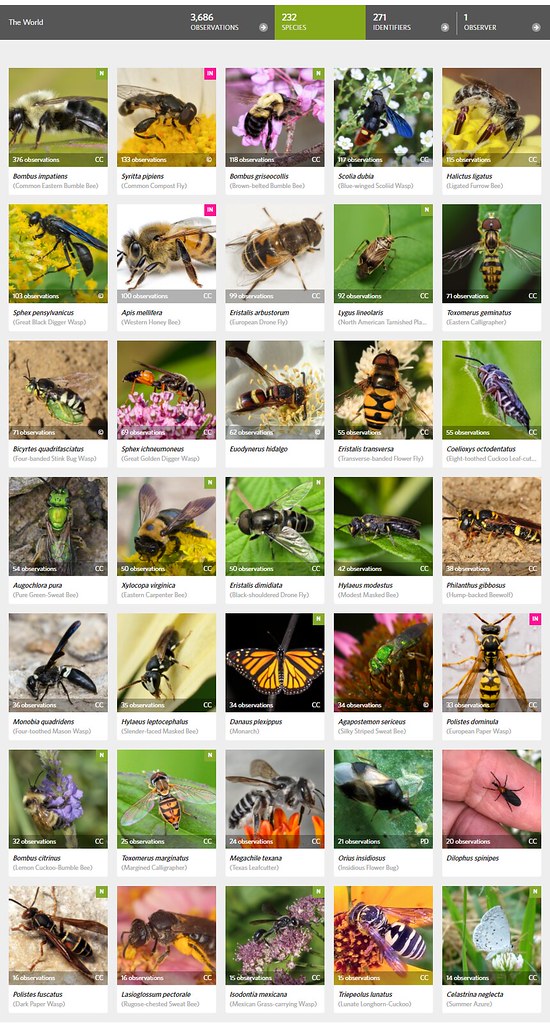 Both the Global Biodiversity Information Facility (GBIF) and Global Biotic Interactions database (GloBI) automatically import iNaturalist Research Grade observations with an appropriate Creative Commons license. I'll use one of my iNaturalist Observations as an example to show how it all works together.

In August I photographed an Eastern bumble bee, Bombus impatiens, on New York ironweed, Vernonia noveboracensis growing in my garden in front of my garage. Check out those bustling pink corbicula (pollen baskets)! 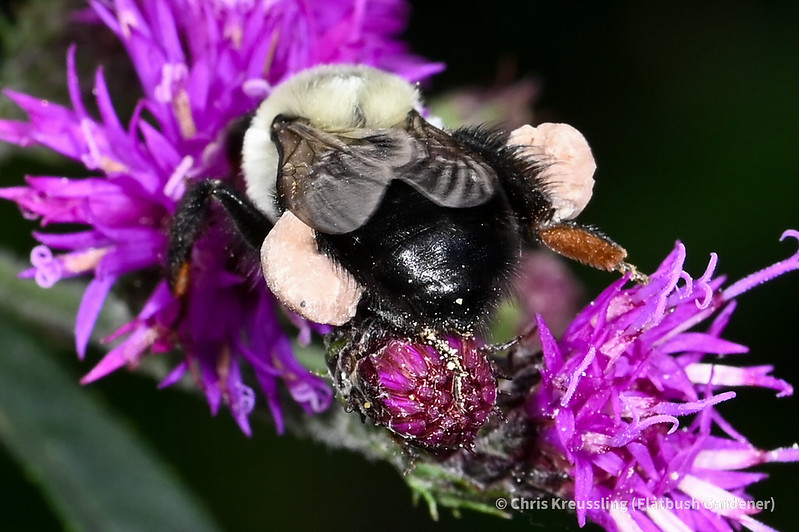 I uploaded that to iNaturalist as an Observation, and added the Observation Field "Interaction->Visited flower of: Vernonia noveboracensis New York Ironweed". 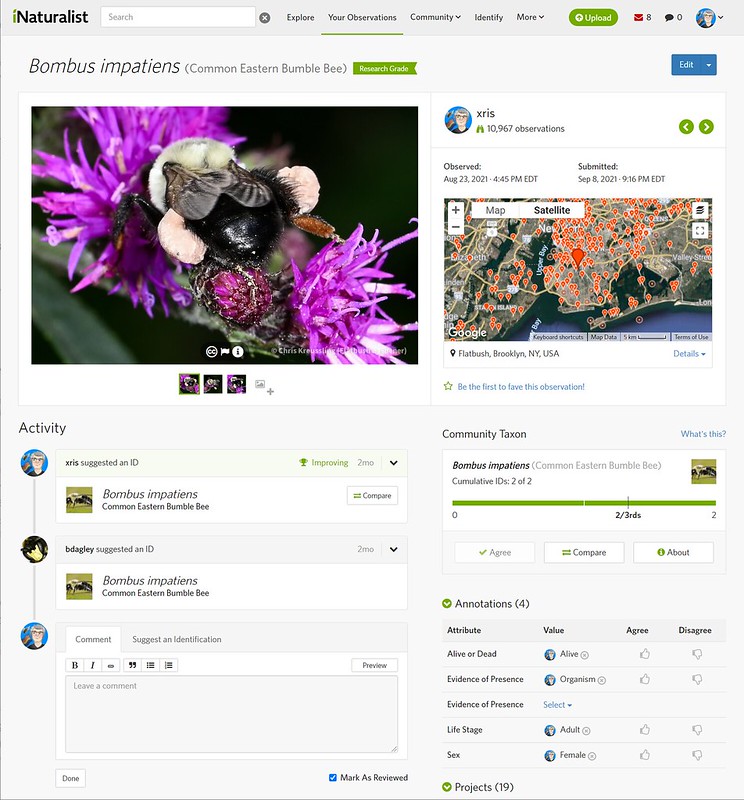 To make my Observations accessible for import into scientific databases, I assign the Creative Commons License Attribution-NonCommercial 4.0 International (CC BY-NC 4.0) to my iNaturalist Observations. Since enough time has passed since it reached iNaturalist Resarch Grade status, the Observation has since been imported into both GBIF and GloBI. 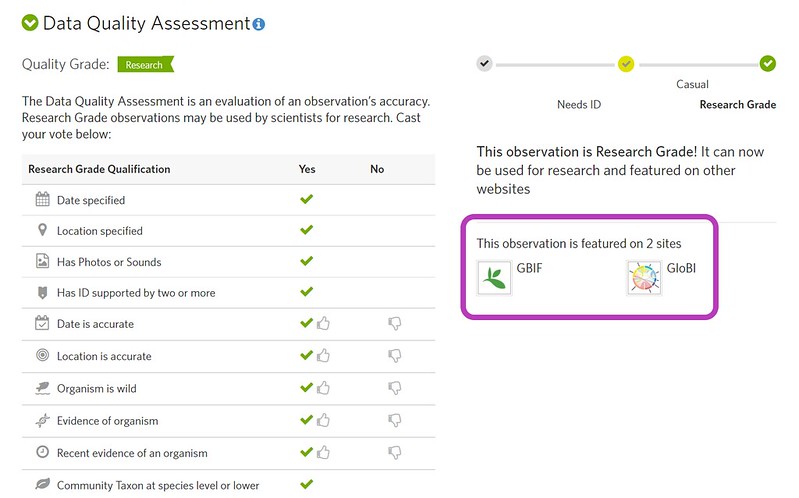 The iNaturalist Observation becomes a GBIF Occurrence. All fields are transcribed from iNat to corresponding GBIF fields, with some values interpreted, e.g.: GPS coordinates are rounded, GBIF Occurrence Status = "PRESENT". 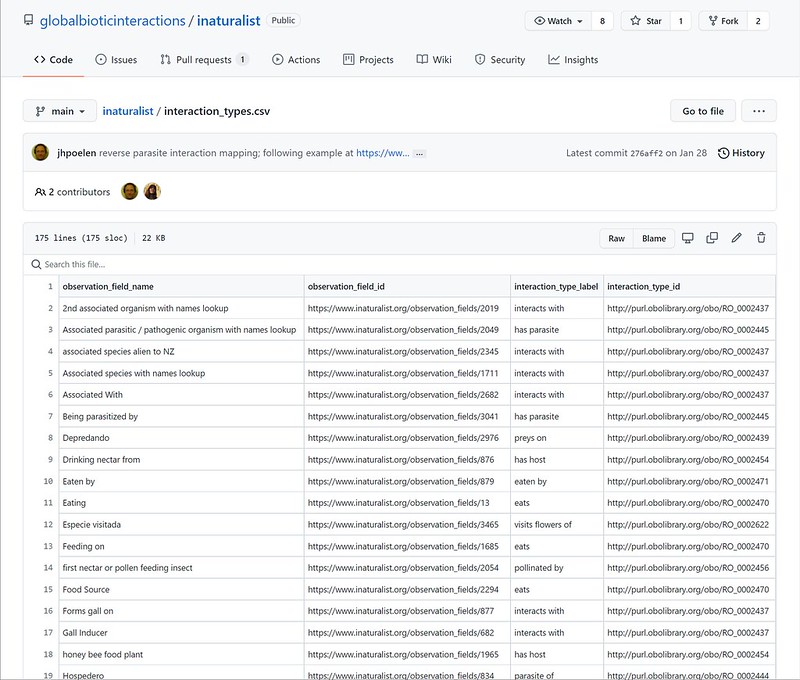 For example, Row 45 of that table shows that the iNaturalist Observation Field "Interaction: Visited flower of" corresponds to the GlobalBiotic Interaction Type "visits flowers of".


The GloBI link on my original iNaturalist Observation lists all iNat obs showing that:

I seem to be the only person to have documented this interaction on iNat!

Integrated Digitized Biocollections (iDigBio)
Symbiota Collections of Arthropods Network (SCAN): provides a web-based collections database system for those that want to curate their data directly in SCAN and serve data to GBIF.