2010.08.30: Added information about BBG's 2010 Signature Plants source, Blossom Nursery.
2010.02.08: More on the Staten Island Pawpaws.
Asimina triloba, Common Pawpaw, is a native fruit true in the Annonaceae, the Custard-Apple Family. The Pawpaw fruit can be up to 12cm/5" long, the largest fruit native to the U.S. Its taste is likened to a combination of banana and mango, or papaya. Two plants are needed for pollination. 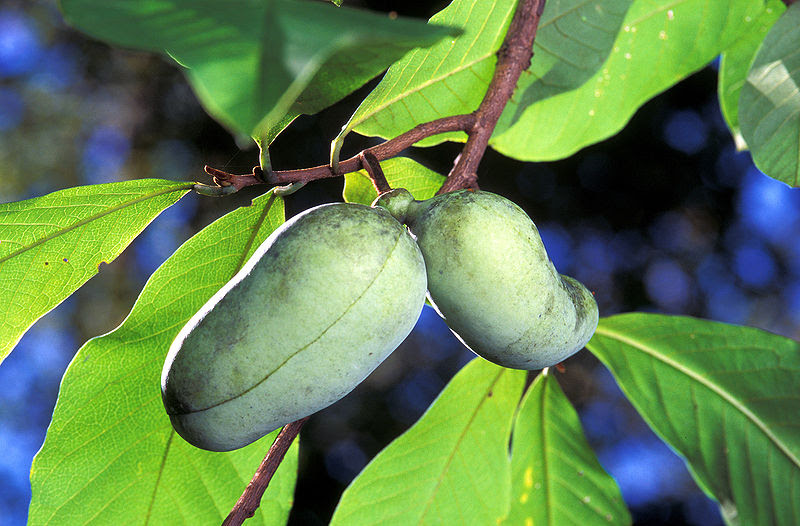 Pawpaw is the common name for plants in the genus Asimina, with several species native to  eastern North America. A. triloba has the most northern range by far of the genus, reaching into New York, and even southern Ontario, and west to Nebraska. This wide range is attributed to cultivation and distribution by Native American people, including the Cherokee and Iroquois.

Locally, its status is threatened in New York, and endangered in New Jersey. It's hard to tell from the NY map, but it has been found on Staten Island, New York City. More on this below.

Pawpaw grows as a large shrub or small understory tree, maturing to about 25' tall in 20 years, rarely to 30-40'. Pawpaw is prone to spreading by suckering, sending up new stems and trunks from the roots, to form a thicket. This tendency decreases as the plant ages, so removing the suckers while the plant is young will promote a single trunk.
Leaves turn yellow in the fall, but don't last long.

This is the exclusive food plant for the Zebra Swallowtail, Eurytides marcellus, butterfly. The caterpillars eat the leaves and form cocoons on the tree. Plant a tree, grow butterflies! It's also the larval host for the Pawpaw sphinx moth, Dolba hyloeus.

I've had this post in draft for over a year. This year, the Brooklyn Botanic Garden offers Pawpaw among its Signature Plant selections, prompting me to dust this off and publish it. Here's what they say about it:


Though native to the eastern U.S., this smallish tree's luxuriant large green leaves add a tropical appearance to the landscape in summer and turn an attractive yellow in fall as the plump, kidney-shaped edible fruit ripen. Interesting-looking purplish flowers form at leaf axils before the leaves emerge in spring. Given ample sunlight, the tree will grow in a pyramidal shape; in the understory, it is multistemmed and tends to sucker. Pawpaw prefers moist but well-drained fertile soils. Two trees come with this offering to assure pollination for fruit set.

Since it's so unusual in commerce, I was curious about the source of the plants. I contacted BBG, and they got a reply from their source, Mark Blossom of Blossom Nursery:


Those Pawpaw trees were grown from seed which were collected in the
Regional Variety Trials Orchard at Kentucky State University, Frankfurt. They have as female parent one of the named cultivars in that collection.

I believe that they are likely to do well in NY, since the Pawpaw cultivars in that collection mostly originated in the North East, and from Maryland to Ohio.

These are the trees which I offer as "Superior Seedlings."

I noted in the NY County distribution map above that Pawpaws can be found in Staten Island. (For my non-NYC readers, Staten Island, aka Richmond County, is one of the five boroughs, or counties, of New York City.) Mariellé Anzelone, Executive Director and Founder of NYC Wildflower Week, alerted me in a tweet that the population on Staten Island is "from a historical planting." That got me curious to know more, and we followed up by email:


A. triloba is more a native to the midwest. As such it's found rarely in western NY state. It isn't native to the rest of the state. The population in Staten Island is horticultural. Apparently sometime in the early 1900s the property owner was sent seed from relatives in Indiana. This is the resultant colony and it seems to be doing well. It does produce fruit. It's a resident in the forest - it's found on a rolling slope that leads out to a freshwater wetland close to the South Shore.

A 1992 article in the Bulletin of the Torrey Botanical Club described the population.

This is one tree that makes me with I had more than a postage size garden to play with. I'd love to plant some of these because they've come up a lot this year and I'm feeling the peer pressure.

I also love the paw paw--I didn't realize it was limited only to the very southern part of Michigan. It has a really cool black flower in spring!

I was just day dreaming about planting one of these this year. Thanks for the inspiration/ reassurance!

Yummm! Your description of the fruit makes my mouth water. Sounds like a cool tree to grow.

Have you ever eaten the fruit? I haven't! Wish I had room for 1 (ok, 2!)Always wondered why the fruit has never been raised commercially if it is truly banana-mangoish...

As we talked when we met in NYC last month, we have these growing natively here and I'm going to have to keep my eyes open for a small one to transplant.

My uncle gave me seeds from his pawpaw (in Indiana :), thank you for reminding me to dig them out!

Years ago I read somewhere that eating Paw Paw for about one month after a general anaesthetic helped the body detox. Can't remember where I came across this information, but it couldn't hurt. They taste great.

Tasted one at nybg.. wonderful... somewhere between a pineapple and a banana. Enchanting foliage. In Ohio you'll find Paw-paw festivals!
http://thlandscapedesign.blogspot.com/

I took a trip down to the Southern end of SI today. In the Pin Oak forest I found two paw paw. These were towards the SE corner of Hylan and Bedell Ave. The land I was on wasn't actually part of the forest. The forest ont he East side of Joline Sough of the pool was completely overgrown with poison ivy. It took a long time to find them. Neither was taller than 3 ft. There is a development on Page and Hyland... So, Lerer Ln. is all that is left of the "stand." I didn't dig around behind the new development.

There were lots of "NO TRESPASSING" sighs and warnings of video surveillance. If I go back to search more I will bring waders. The forests are plagued by poison ivy. Getting in was difficult because of the PI all around on the ground and hanging from trees. If anyone knows of any other sites in the NYC area, please let me know!

I have 8 paw paw trees growing in Tottenville. I will have seedlings this spring.