A decade ago, shortly after I launched this blog, I wrote the following:


[Coccinella] novemnotata was once common. How did New York State get to have a once-native-but-no-longer-resident state insect?

Not just common; C. novemnotata, or C9 for short, was once the most common lady beetle in the eastern U.S.
In 1980, when the bill was first introduced to make C9 our state insect, it was still common. It suffered a rapid decline through the 1980s. By the time it was finally designated the state insect in 1989, it hadn't been seen in the state for 7 years.

In 2006, then-assemblywoman Nancy Calhoun introduced a bill to change the state insect to one which hadn't been extirpated from the state. In her words, "Why do we want to get something like this wrong?" I wrote:


Instead of introducing a bill to gloss over the extirpation of a species, let's reintroduce and restore C. novemnotata to New York State. Then our state insect would be a symbol to aspire to, and not simply an "error."

Well, it may finally be time to do so. In 2001, 29 years after its disappearance from the state, C9 was finally found again, on Long Island. After years of research, Dr. John Losey and his colleagues at Cornell University have successfully reared C9 in captivity. And now, through the Lost Ladybug Project, they are making C9 larvae available to New York state gardeners and others.

Here's one of them, freshly released in my garden, exploring Heliopsis helianthoides in my front yard. 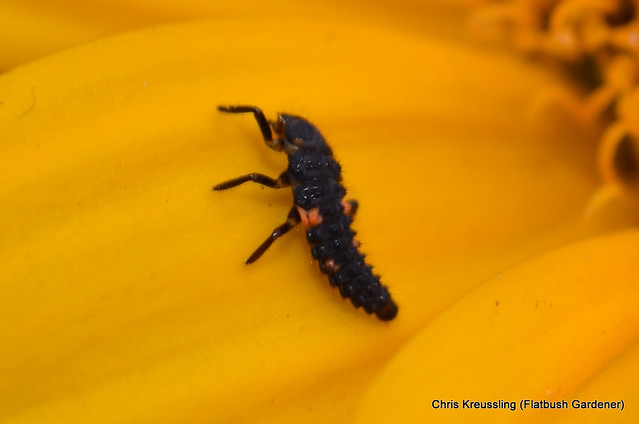 Update, 2021-06-23 : These walks are now FREE with your admission to Wave Hill! Pre-registration is no longer required, but space is limited...