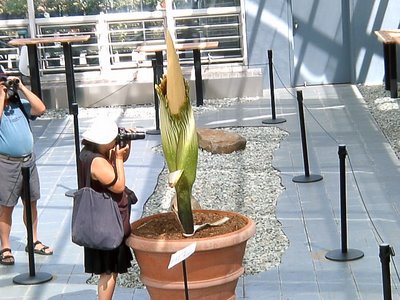 Amorphophallus titanum, the Titan Arum, aka Corpse Flower, is within a week of peak bloom at the Brooklyn Botanic Garden. You can see "Baby", as the plant is known at BBG, and its visitors, on BBG's Webcam. They've emptied the bonsai greenhouse and dedicated it entirely to this plant while it's blooming. Moving out all the bonsai is itself a big deal; some of the plants are hundreds of years old.

It's a big baby. As of last night at 8pm, it was 63.5" tall and 33.5" around. The BBG Growth Chart page says this latter figure is the "diameter", but from the pictures, that should be "circumference."

BBG has opened special members-only hours this evening for visiting the gardens and viewing the plant. If all goes according to plan, if you watch the webcam between the hours of about 6-7pm EDT this evening, you may catch a glance of your host himself and partner admiring "Baby". Check back late (EDT) tonight for my personal photos and descriptions of my first and possibly only ever close encounter with this flower.

Now, about the name. I have no problem with titanum: that's the "Titan" or "big" part. And it is a big flower. It's the largest unbranched inflorescence of any flowering plant in the world. Amorphophallus, on the other hand, translates to "phallus without form" ... rather an oxymoron, I would say. Put it all together and you get:

WOW! Thanks for sharing that awesome link! Have you ever seen a catalog from Plant Delights nursery in North Carolina? They had photos of that same plant in one of their old catalogs, and even had some for sale. I order from them every year...I try to stop, but am severely addicted!

I received their catalog for the first time last fall, and again this Spring. They have numerous plants I covet! Have yet to order from them, but maybe next Spring ...

They are one of my favorite mail order nurseries-not only for selection and fairly reasonable prices, but they always send really nice-sized specimens. I never cease to be amazed at the sucess I have with their stuff, too...considering their climate is much warmer than mine (I'm z4). I do try to help myself out by always planting newbies in the spring, though.

I just returned about a half-hour ago from visiting "Baby" at BBG, and it was everything I had hoped. I got some great shots of the plant and the hub-bub. I've uploaded these to a set on my flickr page.

NOTE: Blogger is down as of 4pm PDT (8pm my local time, ie: now) for scheduled maintenance. I don't know when it will be back up. In the meantime, please visit the flickr set to see some of what I saw this evening.