Growing a Native Plant Garden in a Flatbush Backyard 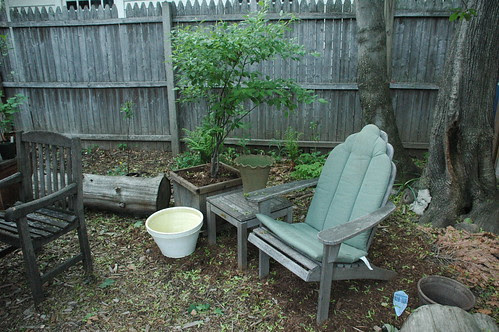 This past Winter, I wrote about the front garden and its changes so far. The backyard is getting jealous.

Collectively known as Victorian Flatbush, this area of Brooklyn is reputed to contain the largest collection of free-standing Victorian homes in the world: over 1,000. I keep seeing this factoid crop up, but I've yet to see any documentation backing it up.

In any case, most of these structures are the classic houses of children's drawings, with peaked roofs and 6/1 or 1/1 double-hung sash windows. They are also fully "detached" houses, with exterior walls, and therefore gardening opportunities, on all sides of the house. Each side of our house has different exposures, full sun to shade. For the first time in more than 25 years of city gardening, I can grow just about anything somewhere around the house.

Over the past two years since we moved in, the backyard has become increasingly presentable. My ideas about what to do there, and what can be done, continue to evolve as I observe the seasons, the wildlife, and how people respond to the garden.

Here are some photos showing how the backyard looked in Spring 2005, just after we moved in. (If the "after" photos below look a little roomier, it's mostly because they were taken with a wider angle lens - and a better camera! - than I had available in 2005.)

At this time, the backyard was nothing but a weedy dustbowl. You wouldn't know it from looking at these photos, but four (4) trees had just been removed from the backyard when I took these photos! You can still see the sawdust in some of the photos.

Looking South, toward the garage. Note the sawdust on the roof from removal of the tree which had been leaning against it. The crack in the garage wall at the rear of the garage (left in the photo) is damage from the tree growing under and pressing against it. There is also damage to the roof edge where the trunk made contact. You can also see a slope from from left to right, from the rear of the property toward the house. This is an indication of long-term drainage issues which will eventually require regrading of the surface away from the house. 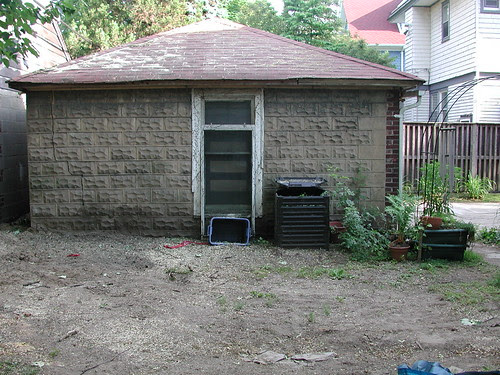 There had been another tree, which we also had to get removed, growing up between our garage and that of our back neighbor's .

Looking East, toward our back neighbor. Roughly behind the green pole was another weedy maple tree growing up between our cherry tree in the center of the photo and another large maple out of frame to the right, near the garage. 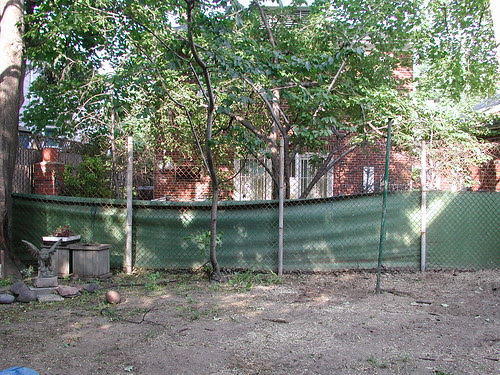 Looking North, away from the garage, toward our next-door neighbor. The fourth tree - another weedy maple - was growing where the two sections of fence meet. You can see damage to the fence where the trunk was pressing and rubbing against it. 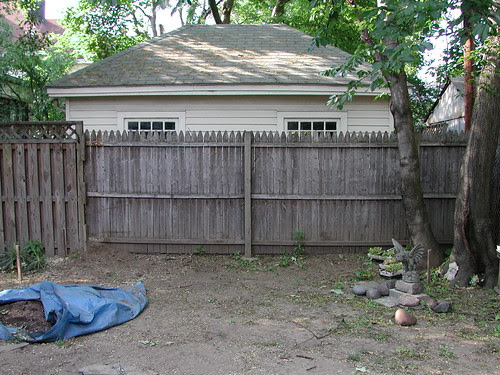 Looking West, toward the house. This is a rear extension, extending 12 feet or so from the rear wall of the house. You can just see the bottom of my tree fort - the second floor porch - at the upper left of the photo. The greenery coming in from the right is our next-door neighbor's apple tree. 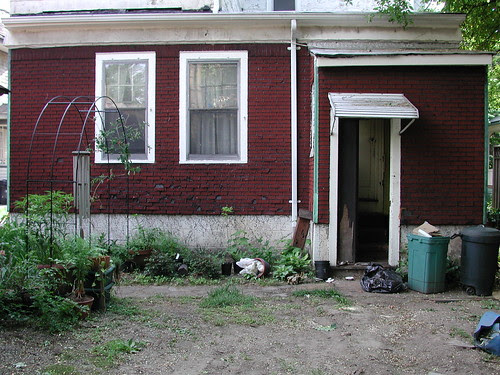 This is a vision of what could be if we redesigned the ground floor of the house to connect it with the backyard. Arrows indicate traffic flows.

The rear extension of the house would be reconfigured to become a large, open plan kitchen the width of the house. This in turn opens up onto a full back porch. Physically and visually this would add more than 20 feet to the depth of the backyard. Steps would lead down from the porch to each side of the house and into the backyard. The dining room (DR) and living room (LR) would be unchanged, except for restoration of the pocket doors which used to join them. 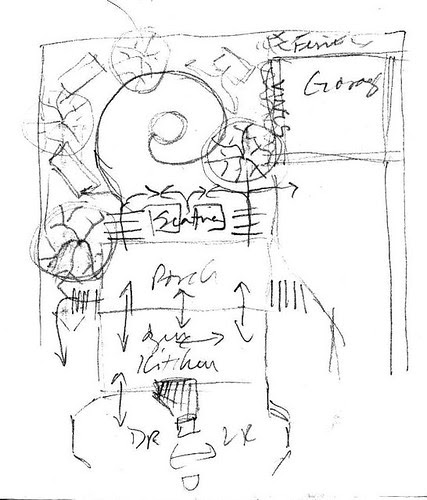 By March 2006, I had cleared the backyard of most of its weeds and established the "campfire circle" which exists today. The logs came from a large Eastern white cedar (Thuja occidentalis) I had taken down from the front yard at the same time I'd had the backyard trees removed. That was a beautiful tree which had clearly been planted originally as a foundation shrub. It was taller than the house, and damaging the front porch. I hated having to have it taken down, and asked to keep several lengths of logs for a future project. For now, they make great seating, and add to the woodsy atmosphere the backyard is taking on. 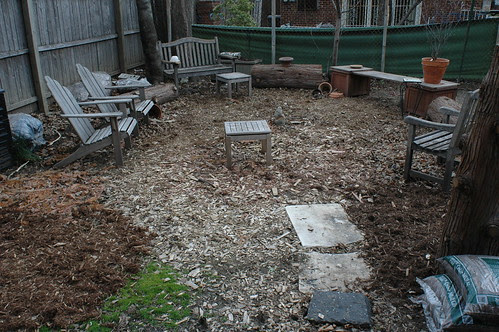 In April 2006, I sketched my ideas at that time for the backyard. Unlike the earlier sketch, this one accepts, for now, the existing structures - the garage, house and concrete path - and permanent plants - the two large maple trees and the cherry tree at the back of the property.

The proposed additions in this diagram are two large shrubs adjacent to the path (hatch marks) which runs along the back of the house, a fence with a gated trellis at the entrance from the driveway, and a trellis with a porch swing in front of the large maple at the corner of the backyard. The diagonal lines show the lines of sight from the swing area to the driveway and the street. The placement of the large shrubs would block the lines of sight, providing privacy and a sense of enclosure, bringing the backyard closer to contributing being a sanctuary. 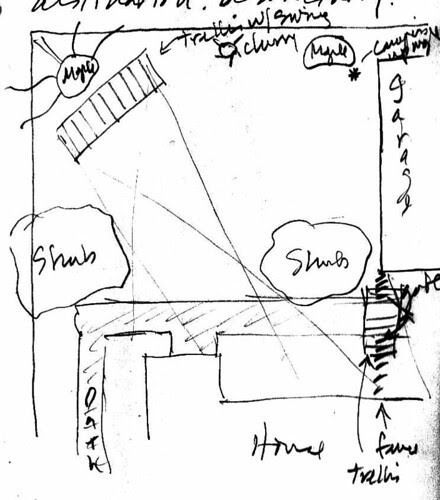 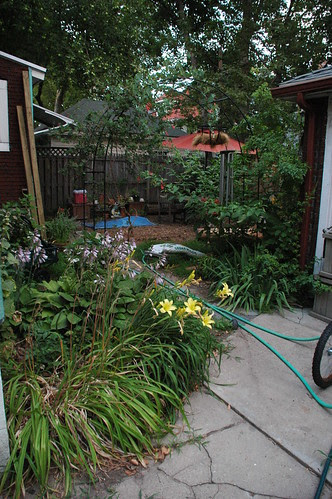 And here's that weedy dustbowl as it stands today.

Looking South, toward the garage. Two of my three compost bins are hidden behind the screen at the left, next to the surviving maple near the garage. You can see the driveway through the trellis on the right. 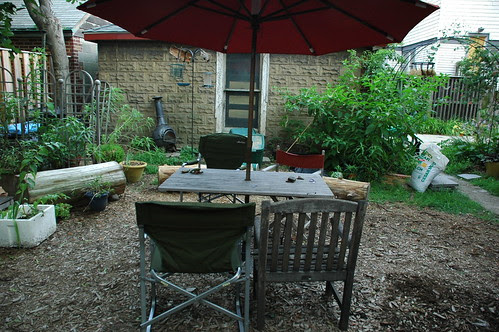 Looking East, toward our back neighbor. They replaced their back fence, for which I am grateful. You can see where the compost bins are now, on the right side. 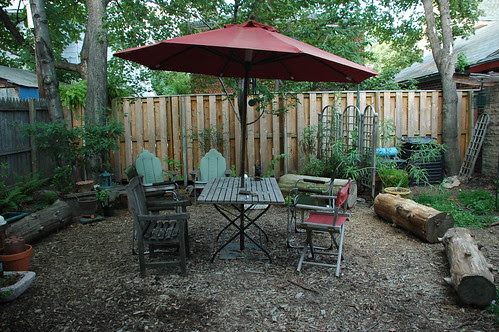 Looking North, away from the garage, toward our next-door neighbor. 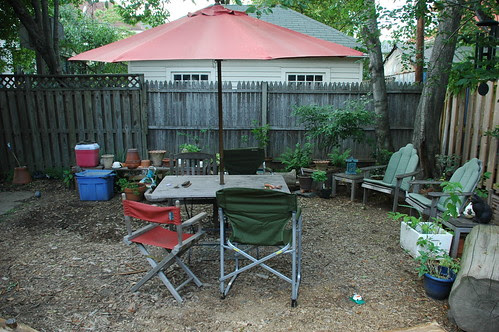 Looking West, toward the house

With all of this, I haven't said much about the plants. It's taken me weeks to put this post together, so I'll stop trying to make it "perfect" and just send it out into the world. I'll come back another time and show some of the plants I'm growing here.

What a difference after only two years. It's always interesting to watch a garden-in-progress.

What fun, both conceiving the plan and then making it happen. I've always been partial to making changes slowly, so you can evaluate each one and then choose the next step. This is delightful as it is now, even if you have more you want to do.

Wow... I love what you've done so far, and admire your patience in watching the seasons, learning about the place after the trees were taken out, etc. I would have saved myself a lot of undo-ing this summer if I had such foresight and will.

Bev: I feel like I'm just getting started. And then there's the other four sides of the house. I guess I've been busier than I realize.

wren: I don't know if I'll ever get to realize the ultimate vision, but it guides me to making other changes in that direction.

rurality: Thanks! Check back in another two years!