In the Shadow (How shall my heart be reconciled to its feast of losses?)

Haddadada the gargoyle stands watch behind the maple in my backyard. 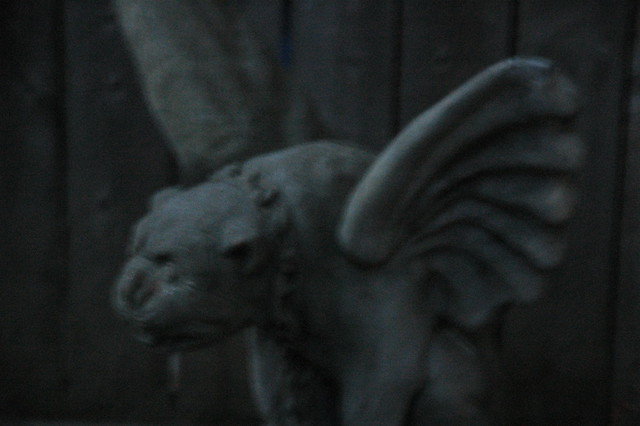 I'd rather be writing about something else, but this presents itself right now. Better I write it while it's fresh, and raw, and resist polishing the life from it.

Earlier this evening, I learned of the death of John Larsen, someone I knew from my old days in the East Village. We were neighbors, bar buddies, and, for a hot minute, boyfriends.

In March of 1996, I had just started reading Walt Odets' "In the Shadow of the Epidemic: Being HIV-Negative in the Age of AIDS", the first book I read which gave voice to feelings shared by many of my cohort, gay men of a certain age: survivor guilt, and a spiritual crisis which has ravaged many of us. I wrote:

so far surviving
what will it mean to be alive
having outlived generation after generation
decades of death
the explosion widening until, finally
and yes, with some grim, righteous satisfaction
finally noone can truthfully say
they are not also affected

imagine how it will be
when your closest friends are strangers
when long ago you gave up hope
of growing old together
as everyone you've loved, and despised
has died, seven times over
when you've learned, and loved, and lost
and learned, loved, lost
and ...
When each new friend is met with the knowledge
that they too will leave soon
but it no longer matters
because, you think, you've already grieved their deaths too

the corpses pile up
against the walls you've built around yourself
walking along familiar streets
past the bars, your old haunts
you see tombstones, crosses, ashes
and you're not safe, even in your own mind
especially at night
when the walls must come down
and you must remember the dead

I moved to Brooklyn in June of 1992. I'd lived 13 years in the East Village, in the epicenter of the AIDS epidemic. My move was neither well-planned nor well-executed. I knew I had to move. I didn't know how important it would be to me for my survival, for my recovery. Though I could not surface the thought at that time, let alone voice it, I was also running, trying to run, away. I couldn't face any more death.

for how long
must I never forget?

the epicenter
reaches to numbers inconceivable
my heart implodes

when darkness falls
how should I greet it

Reminders of the upcoming 6th Anniversary of 9/11 are piling up. My first day back at work from my North Carolina trip, I walked by the Deutsche Bank building - ruined in the attacks, condemned, and only now being dismantled - where two firefighters had lost their lives the day before. I could see the blackened scaffolding and walls of the building. I smelled the smoke, startled for a few minutes, taken back to the months after the attacks, when the fires burned for months, when we walked every day through the crematory of downtown Manhattan. I know - knew, met a handful of times - a woman, Renee Barret-Arjune, who died from injuries she received in the World Trade Center attacks. It's how we measure our distance from such things: who we knew, how many, how close.

Earlier this summer, Eleanor Traubman of Creative Times gave me a little gem of a book, The Wild Braid: A Poet Reflects on a Century of Life in the Garden. It's by and about the poet, Stanley Kunitz (1905-2006), written with Genine Lentine and with photographs by Marnie Crawford Samuelson. When we met at the Flatbush meet-up, she recommended this book to me.

I've estimated that half of everyone I've ever known has already died: from AIDS, chemical dependence or overdose, or suicide. I should have expected to feel resonance with a centenarian gardener-poet writing at the end of his life. Here's an excerpt from Kunitz' "The Layers":


When I look behind,
as I am compelled to look
before I can gather strength
to proceed on my journey,
I see the milestones dwindling
toward the horizon
and the slow fires trailing
from the abandoned camp-sites,
over which scavenger angels
wheel on heavy wings.
Oh, I have made myself a tribe
out of my true affections,
and my tribe is scattered!
How shall the heart be reconciled
to its feast of losses?
In a rising wind
the manic dust of my friends,
those who fell along the way,
bitterly stings my face.


no doubt the next chapter
in my book of transformations
is already written.
I am not done with my changes.

This evening, fresh with the news of a death of a friend, I look behind. Nor am I done with my changes.


Renee Barrett-Arjune worked as a compensation accountant at Cantor Fitzgerald in Tower 1 of the World Trace Center. She grew up in Brooklyn and lived in Irvington, NJ. She was active in the church where Blog Widow John worked at the time; I met her a couple of times through him. She was 41.

Her name is inscribed in a bronze panel - #N-48 - along the North Pool of the National September 11 Memorial at Ground Zero. The names of Cantor Fitzgerald employees and consultants make up 34, nearly half, of the panels surrounding the North Pool.
Posted by Chris Kreussling (Flatbush Gardener) at 8/28/2007 10:17:00 PM

Do you know where John Larsen was from before NY?

Xris, thanks for the link to 'The Layers,' the reminder to get that wonderful Kunitz/garden book, which I fell in love with in a bookstore over the summer...and for your wonderful words, too. I will keep your friend in my prayers. Being able to tend my garden as it dies and comes back to life each year is, I think, why I sometimes think my true religion should be listed not as 'Roman Catholic' but as 'gardener'...

CC: No, I don't know. John thinks he was either from Massachusetts or Florida, like that narrows it down. Did you know someone who moved to NYC in the 1980s?

Brenda: Thank you. Kunitz really got the intersections of art, spirit, and gardening, and Wild Braid captures that. He says good things about death and compost!

Wow - very powerful. I've read your words several times, trying to sort out my own feelings.

Yes, it's a tribute to the dead to mourn, to feel pain that they are no longer with us. But mass casualty in one day or over many years begins to numb you. Necessary survival technique, and yet part of the survivor's guilt is seeking the relief of forgetting, even briefly. How awful that it no longer hurts as much as it once did.

And then it does again, and we only want the pain to stop.

I'm sorry for your loss, and your pain. I hope that you find comfort, with friends and in life, because in the end, that's all we have.

Wren: That's it. In the field of recovery, it's called endurance trauma, when there's insufficient time to recover from repeated injuries or losses.

The only way out is through. A friend accompanied me to visit the AIDS Quilt when it was last displayed in Washington, D.C. When we reached the edge, she had to turn back. She asked me "How do you do it?" How do I deal with it? "By feeling it," I told her. As I've learned that I can survive the feelings, they come easier.

Yes I knew a John Larsen who went to NYC from Gainesville Florida in the early 80's. After that I did not hear much about him.

It is official Tom and David have moved to Maui.

I have read this multiple times, as Wren did... but unlike Wren I have not yet sorted out my thoughts sufficiently to express them, I am afraid. I do want to say that I am awed by your strength, whether you feel strong right now or not. (Moreso since you do not.) I really feel that true strength is in "getting through" as you put it, not sticking your head in the sand or checking out... but that is never the easy road. And sometimes a lonely one. ((Hugs))

You know, I don't get a chance to visit your blog as often as I'd like to (or mine, for that matter), but I'm always glad when I do. I really appreciate this post, both for the benefit you get from expressing your feelings, and the benefit to me being reminded to do the same. You're absolutely right-the only way out is through....and I needed to hear this. I lost a lover to a car accident 3 years ago, but I have yet to come through it. His loss just sent me sideways, and I've hidden behind alcohol, food, and a false cheer ever since. The garden sure helps as a lovely distraction, but doing my best not to feel isn't cutting it. You are a profound comfort and inspiration...thank you.

Sorry for your loss. Survivor's guilt is a tough one. Coming on 23 years now living with HIV, it is almost shocking to hear someone dying from it. Especially since the tsunamis of death in the 80s were so numbing, it almost seems incredible. Looking forward to the Flatbush romp. We can talk more then.