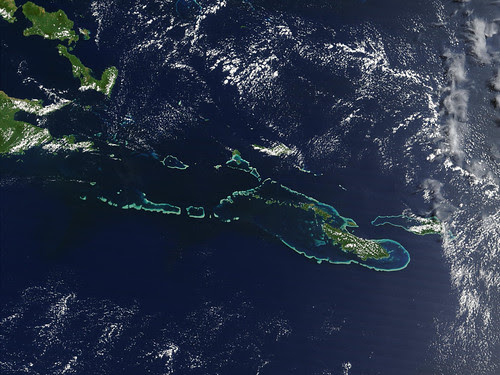 For five weeks in early 2009, BBG’s Dr. Susan Pell is leading a field research team in remote areas of Papua New Guinea. The team will work with local naturalists to survey the flora of the little-explored Louisiade Archipelago and compile a conservation assessment. ...
The botanical field reconnaissance will include both intensive collection of forest plants around Alotau and targeted species enumeration studies. The purpose of the fieldwork is to expand knowledge of the biodiversity of the Milne Bay Province. The Louisiade Archipelago is of specific interest because of its large number of native species.
- About the Expedition

I had the pleasure of meeting Dr. Pell as one of the instructors for the Plant Taxonomy class I completed at BBG in December. Thanks to her, I now have some idea of what a plant molecular systematist does! I would bet she's currently the most remote correspondent of the Brooklyn blogosphere. She started blogging about the expedition just three days ago:

Every time I go out into the field there are so many great stories to tell. So I’m going to try to use this web diary to share some of the things that come up over the course of our six-week exploration.

Once we head into the remote island areas I’ll be blogging by satellite phone, so the posts may get a little succinct. I’ll have time at the start and the finish to share some longer stories. Enjoy!
- Blogging PNG, 2008-01-07, Susan Pell, BBG

We'll be able to track the team's progress on a map on BBG's Web site. After 30 hours of travel, Dr. Pell is now in the capital of Port Moresby. From there, they'll travel to Alotau:

After convening in Alotau, PNG, to provision and confirm final plans, the team will depart January 15 on a charted boat for the three-week exploration of the three main islands of the Archipelago, Misima, Rossel [Yela], and Sudest [Vanatinai]. These islands are home to many species found nowhere else in the world. The expedition will wrap up outside of Alatou, the capital of Milne Bay Province, which located on the island of New Guinea.
- About the Expedition