As we approach the Second Annual Great Flatbush Plant Swap, I'm hoping to post some tips on how to divide perennials to bring to the event. Now is the time to do it, as foliage has just emerged, plants are actively growing, and most will recover quickly from any perceived insult of being lifted out of the ground and ripped into pieces.

I have to do with this with perennials in my gardens, so I'll use them as examples. Today I divided one of my larger grasses.

This is a three-year old clump of Panicum virgatum 'Cloud Nine', a cultivar of our native switchgrass I ordered from Plant Delights in Spring of 2008. Two weeks ago, I cut back all the dead foliage from last year, leaving the stubble you see here. The clump is roughly a foot in diameter. This is ready to be divided. 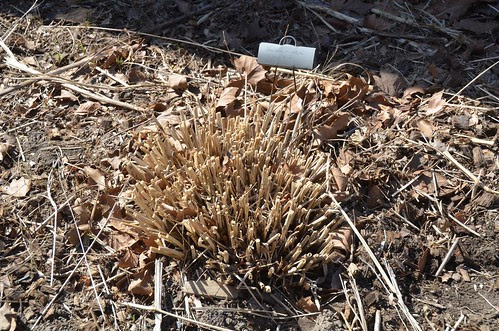 One way to divide is to slice into the plant while it's still in the ground with a garden spade, taking out slices as if it were a cake. I'll use that technique on some of my Hemerocallis, Daylilies. Today, I chose to lift the entire clump out of the ground to separate it using two garden forks. This also made it easier to photograph to demonstrate the technique.

Clumping grasses like Panicum often have deep roots, contributing to their general drought-tolerance. To keep enough of the roots, first cut straight down with a deep-bladed garden spade, all around the perimeter of the clump. 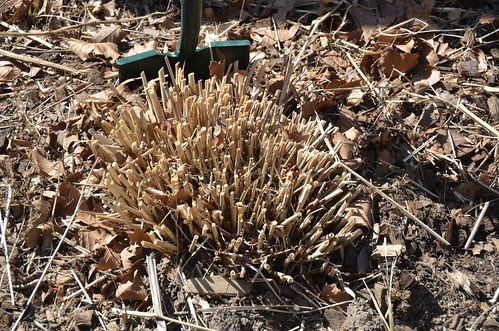 With the perimeter cut, slice beneath the clump to sever the deeper roots. This took a bit of work until I was able to loosen the clump and fork it out of the ground. 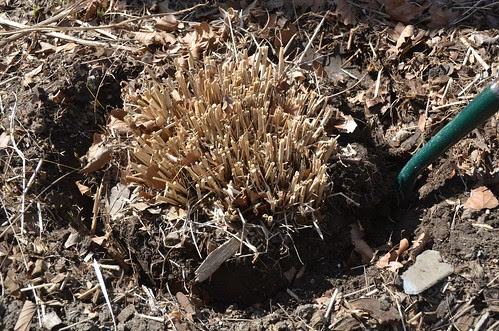 Here's the intact clump, viewed from the side and from above, set on a tarp for division. Note how deep and dense the roots are, even after severing them with the spade. 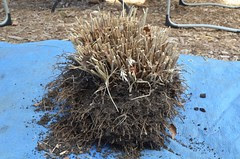 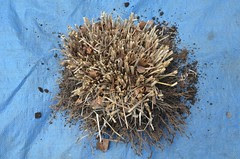 Next take two garden forks. (If you don't have two forks you could divide the clump with the garden spade at this point.) Place the heads back-to-back, with the handles slightly offset from each other, and drive them down their full length into the center of clump. Note that both heads go straight down, and the handles are splayed out from each other. That provides the leverage you need to separate the clump. 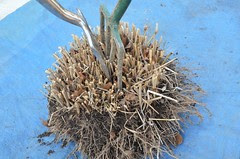 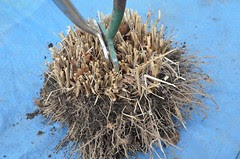 Keeping the tops of the fork heads against each other as a pivot, push the handles toward each other. You're using the forks as levers to spread and break apart the clump. Push from both sides. If that's awkward, try standing with one fork toward you, the other away, then push the closer fork away while pulling the further fork toward you. Watch your fingers! When the clump gives, it will release quickly, bringing the handles - and your knuckles - together. Gloves help! Once it gives, simply tease the two halves apart to complete the separation. 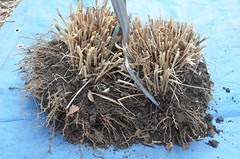 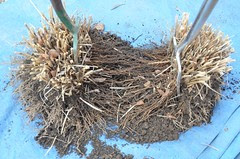 With a large clump like this, I repeated the same process on each of the two halves. I was then able to break apart the four quarters into smaller pieces by hand, giving me a dozen generously sized clumps to replant in my garden and share at the Plant Swap. Some of them will also go to the new native plant gardens for the Flatbush Reform Church communal garden, another project of Sustainable Flatbush. 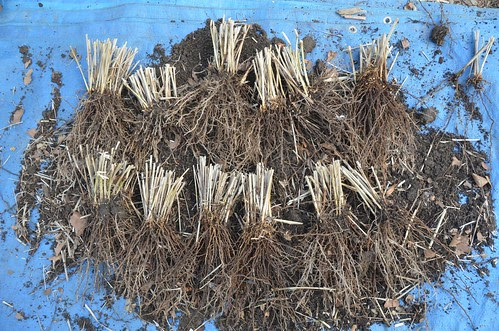 What a great tutorial!

Thanks! Also planning one on Daylilies/Hemerocallis (easy), and Bearded Iris (also easy, once you know how). These are both common plants at the Plant Swap, easy to grow, and forgiving. Possibly also Siberian Iris, a fun one because the geometry of its growth is so clear.

I've got some others to divide, and may use them as examples of re-using the same techniques on plants with similar structures.

This was great; thank you!

Glad you appreciated the reference to SCIENCE!

You are so much nicer to your plants than I am! I have already slpit a bunch of daylillies & various kinds of Irises, thanks to your tutrial I think I'll tackle the grasses for the first time.

Why nicer?! Daylilies and Iris will be my next victims. ;-)

What a great tutorial! I have some plants that desperately need dividing, and I've been too nervous to do it myself because I don't know what I'm doing. Can't wait for the lily demo!

Can this method be used to divide hydrangeas that have outgrown their planter?

No, Hydrangeas are woody plants. Splitting the wood will likely kill the plant.

If it's too large, you can prune it back to the size you want.