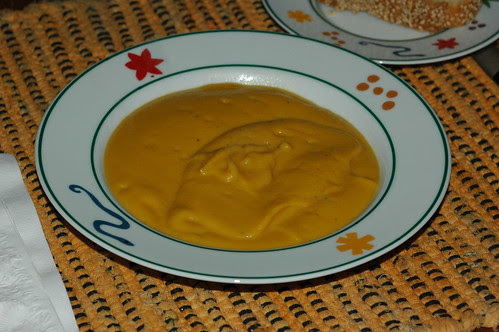 This afternoon I made squash and pear soup for three. There are several things I like about this recipe. You make it a couple of hours before dinner, or even the day before, then heat it just before serving. It can be made for small groups, as I did today, or large parties of 20 or more. It's always a crowd pleaser. The combination of flavors and textures - savory, dense and smooth from the squash, sweet, light and slightly grainy from the pears - is surprising and pleasing. It's a forgiving recipe: the exact proportions are not as important as the basic ingredients and their preparation. The three main ingredients - winter squash, pears, and onions - are all available locally at this time of year from farmer's markets such as NYC's Greenmarkets. It can be made completely vegan, without even any dairy, if you wish. And all the skins from the squash, pears and onions can go in the compost!

The original recipe came from Anna Thomas' The New Vegetarian Epicure. I've simplified the recipe over the years; the original recipe called for both squash and yams, and three different liquids: vegetable broth, milk and wine. I've made it many times before, so today I didn't bother following a recipe. Figure roughly 2 parts (by gross purchase weight) squash, 1 part or more of pear, and 1 part or less of onion. Use proportionally more pear for a sweeter soup, more onion for a savory soup. As you can see from the photo above, it gives you a thick, creamy soup, so it needs some added liquid. You can also influence and shift the taste and texture by your choice of liquid. Today, I used just enough milk to blend things easily, but you could use soup stock or fruit juice instead. 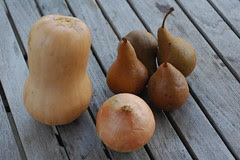 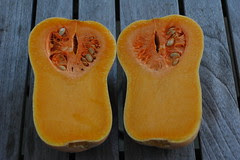 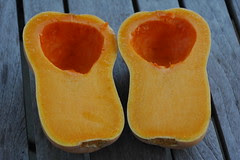 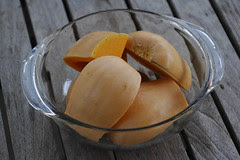 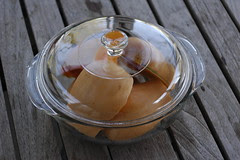 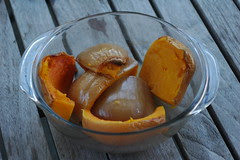 Preparing the onions and pears 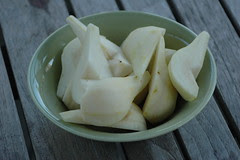 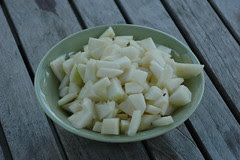 hello from brooklyn...
one way to make cooking squash easier is to just put the whole thing in the oven, seeds and all. (poke it with a knife to make a steam hole.) i do this with kabocha squash, butternut, and acorn. so much easier than hacking away at a giant bowling ball!
second, some spices to try--- Chinese 5 Spice Powder (it's like savory pumpkin pie), cardamom, and smoked spanish paprika.
also, i think shallots might be a nice alternative to the onions.
thanks for your recipe!

Yo, Brooklyn! Thanks for the ideas. Shallots and cardamon sounds great. Not familiar with the other spices you mention. Will have to give them a try sometime.

Thanks for the recipe --our local CSA program gave us so much squash and bartlet pear, we didn't know what to do--now i will just make this soup. i hope to freeze it for winter when we no longer get fresh seasonal veggies. I used acorn squash and it wasn't hard to get the rind off at all. Also, our toddler loves this soup so much, she does a little dance when she tastes it. now, what to do with our sweet dumpling squash?

I made the soup last night, again without referring to the recipe. I nuked the squash whole in 3 15-minute intervals. I started keeping cardamom on-hand last fall, so I used some of that to season the soup, along with ground cloves, allspice, and some ground ginger. I used cream and milk as the liquid.