UPDATED: Expanded and organized into topics.

Yesterday, Matthew Wills and I traveled to Staten Island in search of Magicicada, the periodical cicada, specifically, Brood II. We both had examined the online reports and articles; although the south shore of Staten Island is their stronghold, Cloves Lake Park - not that far from the ferry terminal - kept turning up as one of the places they'd been sighted. As a bonus, I had the car, and this park was closest to the Verrazano narrows bridge.


Matthew had some intel that they had been sighted in the northwest section of the park, so we started there. Finding none after scouring the narrow northern end of the park, we packed up and went to the southwestern edge, and parked along Royal Oak Road.

Once Matthew and I found the evidence, it was hard to miss. The ground in many places had numerous exit holes. These are only six inches apart or so. 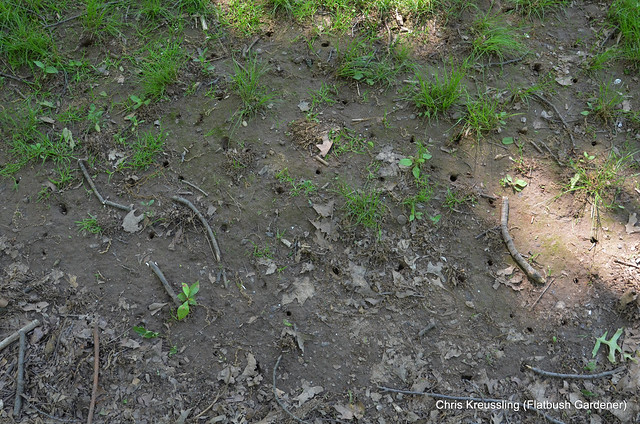 Closer to the bases of the trees, there were innumerable husks - shed nymphal exoskeletons - as well as disembodied parts of adults that had been eaten by their numerous predators. 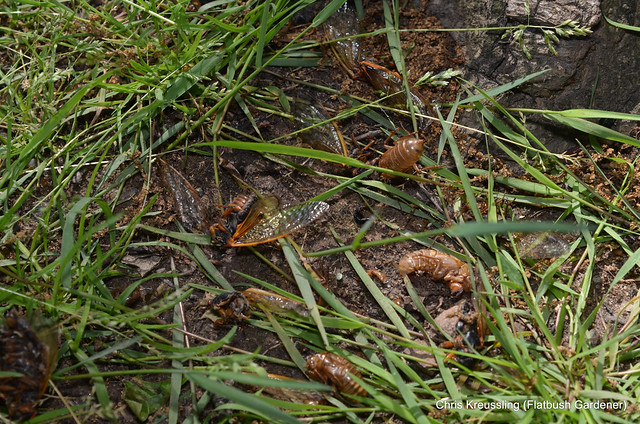 We each collected samples at different locations. I'm hoping I can cobble together enough to identify at least one of the species.

Within a minute after we'd parked. Matthew found one nymph struggling through the long grass, the only live individual we found. We took turns posing with it. Here it is on Matthew's arm, obligingly depositing a generous drop of honeydew. (We didn't sample it.) 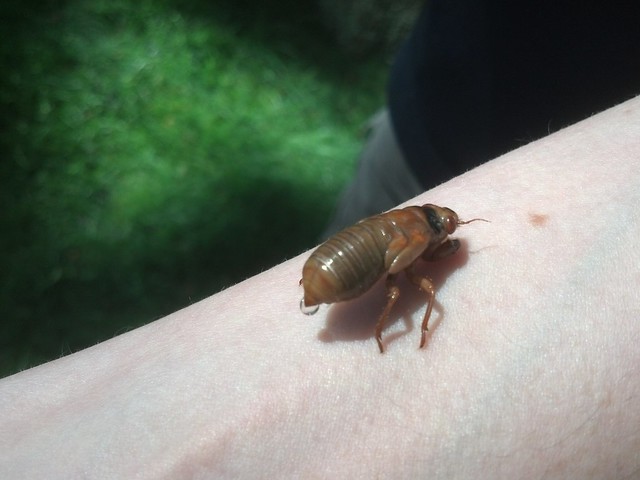 After our photo shoot, we placed it on the nearest tree, next to my parked car. As we left, we found it again on the tree, just a few feet above where we had placed it. Its appearance had already changed from just an hour or so earlier; it no longer appeared quite so fresh and juicy. It was working on its molt into an adult. 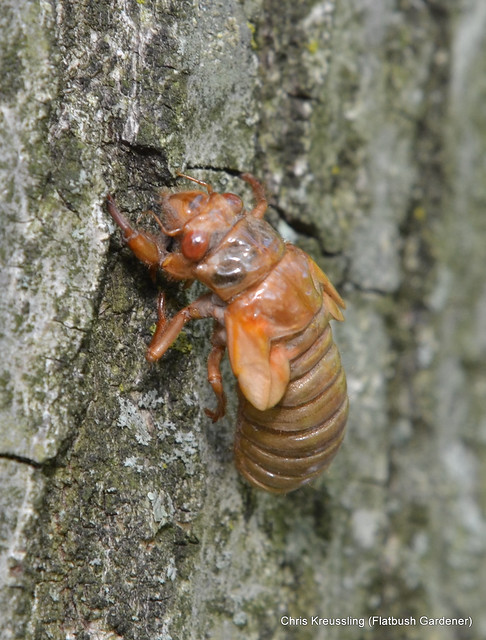 Their distribution was extremely localized. Even venturing away from the street along the margin of the park turned up relatively few husks, although they were abundant along the street trees. Matthew hypothesized, and I concur, that the paved areas of street and sidewalk create a micro-climate that warms the surrounding soil earlier than more shaded, unpaved areas. So what we found is just the advance guard. The deeper and wilder woods that comprise the southern end of Clove Lakes Park is ideal cicada territory. It's going to be quite a party.

Given the difficulty we had in finding them, I would recommend to other eco-tourists to wait until the warmer weather later this week, when they should emerge in even greater numbers. Once they begin sounding off - which could be as early as this weekend - they will be easy to locate. It would have saved us a lot of time if the little buggers had been announcing their presence!

Magicicada spend most of their life underground, suckling on tree roots. Every 13 or 17 years - prime numbers - they emerge as nymphs, metamorphosize into adults and molt their nymphal exoskeletons, mate, and die. Hopefully, they emerge in numbers overwhelming to their predators, who gladly feast upon them.

The years of emergence are not hard and fast. Some populations of Brood II emerged in 2009, four years "early" or 13 years, instead of 17 years, after they hatched and burrowed underground. Broods that emerge early or later, - almost always exactly four years off their normal cycle - are called stragglers. Because each species is typically tied to its 13- or 17-year cycle, straggling is believed to play a role in species formation.