Festival of the Trees #11: Trees in the Concrete

Read the story of this urban tree at the bottom of this post. 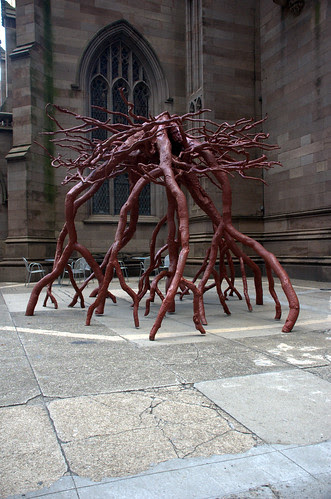 There were a lot of entries. I underestimated the work involved in collecting and assembling all the entries submitted into a semi-coherent post! Part of the problem is technical; I've still got about a dozen things I found which I need to review. (Note to self: NEVER use the "Email This" feature of Bloglines, since it strips out all reference information such as URLs.) But I think I've addressed all the non-host submissions. I'll be coming back with an update tomorrow (now this) evening, so If I've missed anything, please leave a comment so I can follow up.

Trees in the Concrete (Urban Trees)
News and events

The Society of Municipal Arborists chose the bald cypress, Taxodium distichum, as their 2007 Urban Tree of the Year [PDF].

This past weekend was Sakura Matsui, the Cherry Blossom Festival, at the Brooklyn Botanic Garden (BBG). It's their biggest event of the year, and tens of thousands of people turn out for it. At the beginning of April, there was a single cherry tree blooming. The 42 varieties of cherry trees planted at BBG extend the cherry blossom watching season as long as possible.

The New York City Parks Department pruned a historic grove of trees in Kissena Park in Queens. These trees are the remnants of the Parsons and Company nursery which had its origins in the 19th Century.

Judith Z. Miller of Park Slope, Brooklyn had an exhibition of her artwork formed from branches dropped from street trees at the Prospect Park Audubon Center.

Also in the past month, New York City provided estimates of the economic value of street trees, and announced plans to plant one million more trees in the next ten years.

A comprehensive collection of images of trees in concrete from Claudia Lüthi in though trees grow so high, another tree blog I discovered by hosting this carnival.

Terrell at Alone on a Limb shared a photo from Digital Tribes of a street tree laid low in a prominent location.

Bevson of Murmuring Trees from New Jersey sent in a photo of a tree in Baku, with bonus cats lounging in its shade.

From here in Brooklyn, some photos of Magnolias as street trees in Clinton Hill Blog and an unidentified white-flowering street tree in Park Slope from Brit in Brooklyn.

Salix Tree shared images of street tree vandalism from her town in Ireland.

On her blog, The Written Nerd, Book Nerd of Brooklyn shared a poem by Marge Piercy, The streets of Detroit were lined with elms, to open National Poetry Month.

Lori Witzel of Austin, Texas was inspired to write about communing with trees in some familiar man-made landscapes.

In Meanwhile, Back in the Holler, Cady May wrote about trying to understand the patterns of tree survival in an urban setting.

In her blog Tree Notes, Genevieve Netz wrote about the importance of diversity in urban forests, contrasting it with the then-conventional advice given by Charles Sprague Sargent over a century ago. Also check out the photo of a doomed tree. Idiots.

In The Brooklyn Paper, Nica Lalli writes about the frustrations of plastic bags in trees, and choices we can make to reduce this problem.

On his blog, Riverside Rambles, Larry Ayers posted photos and a poem by one of his readers, Joan Ryan, about a tree at a community center.

Dave Bonta writes about the interrelationship of suburban communities and their trees on his blog, Via Negativa.

Ficus is The tree that ate L.A., as Elizabeth Licata explains on Garden Rant.

Julie Ardery sent in a post from the Human Flower Project - a wonderful site - about the Girl Trees of Beijing. Some basic botany is in order.

Dave Bonta, one of the founders of Festival of the Trees, discovered the blog Eucalyptus, whose authors hail from Melbourne, Australia. A particularly interesting tree story they related the past month is that of the Lone Pine.

In her blog, Crafty Green Poet, Juliet Wilson wrote about the threat to an ancient woodland outside Dalkeith, a suburb of Edinburgh.

On her blog, Walking Prescott, Granny J of Prescott, Arizona shared her photos of Dangles, the early spring inflorescences of trees: "The trees have a particular beauty just before they leaf out. Some pictures of blossoming trees I saw on walks around town."

Jade Blackwater shared her visit to the Topiary Garden at Longwood.

Jade also sent in Rohan Rao's striking photos of some trees in India.

Don West sent in his journal illustration and notes about a tenacious tree from his blog Idle Minutes.

Christopher of Tropical Embellishments shared some photos of the ripening fruit of Thrinax excelsa, the Thatch Palm or Pea Palm. I'm going to miss his posts from Maui, and look forward to hearing about his new adventures.

A beautiful detail of a weeping larch by Sandy on her photoblog In a Garden.

Rohan Rao writes about the need to save trees in India, raising issues which had not occurred to me, such as the increasing demand for trees for firewood in cremation rituals. Also submitted by Jade.

In his blog Invasive Notes, John Peter Thompson wrote about the challenges of balancing "plant a tree" messages - Arbor Day was this past Friday - with concerns about managing biodiversity.

Tim Abbott of Walking the Berkshires submitted the curious case of Nutrimens lepi, the gumdrop tree (now with bark!)

In Where Trees Have Faces, Fred of Fragments from Floyd writes about the surprise they've created for their granddaughter in their Enchanted Woods. (Okay, editorial comment here: I hate these things!)

Check out the sculpted trees of Broken Vulture at bingorage, submitted by Jade Blackwater.

Jade Blackwater will be hosting Festival of the Trees #12 for June 2007 on her blog, Arboreality. You can email submissions to her at jadeblackwater (at) brainripples (dot) com. Deadline for submissions for the June 2007 edition is May 29, 2007.

This was my first time hosting a carnival. I now have a better appreciation for the effort and care that goes with the job! I'm grateful that so many people were inspired by the theme, and the importance of urban trees. I hope that I've met your passion and done justice to it.

The image at the top of this post is one of my photographs of Trinity Root, in the courtyard of Trinity Church in Downtown Manhattan, one block from Ground Zero, and three blocks from where I work. Here's the story of this urban tree from the sign accompanying the sculpture for the 5th anniversary of the September 11 attacks last year, when I took this photo:


This sculpture is cast from the roots of the sycamore tree that was stricken by flying debris on September 11, 2001 in the churchyard behind St. Paul's Chapel at Broadway and Fulton Street. [Steve] Tobin created the bronze sculpture from 300 individual castings of the tree's roots to commemorate the events of September 11. The sculpture was dedicated here on this site on September 11, 2005. The original sycamore roots, painstakingly preserved by Tobin with the help of tree experts, now rest permanently in the St. Paul's Chapel churchyard.

For me, there is no single better example of the power of urban trees and the passion they inspire in us. It's a fitting close to this edition of Festival of the Trees.
Posted by Chris Kreussling (Flatbush Gardener) at 5/01/2007 12:00:00 AM

I share your distaste for these things, but in our house (and forest) such things are a wifely indulgence. In this case, when the tree got a name(Isabella) I knew it was destined for a face.

I think she is heavily influenced by 1) Tolkien and the Entlings and 2) an Old Testament verse about "the trees will clap their hands".

And she looks forward to the day our 6 yr old granddaughter will "discover" this surprise grin walking through granny's woods!

Wow, I'm blown away by how many links fit the theme. Thanks, Xris! Can't wait to go through and read all the posts - just as soon as I get this properly linked.

(FWIW, I thought Fred's wife's tree was kinda cool, but then I like plastic pink flamingos and wooden ducks with rotating wings on a stick, too. But not garden gnomes! Garden gnomes are tacky.)

Very good job Xris of having a flowing narrative for the Festival. Thanks for including me.

Great Festival! Wrote a mini promo on Riverside Rambles about it but not being the master of the board, this is the only way I knew to link it. Hope this works.

Wow-very comprehensive post! You did a great job...I enjoyed all the links. I agree with you about those tree faces, but as the comments here reflect-everyone has their own ideas and thresholds for tackiness!

Thanks for hosting! Many enjoyable reads.

My favorite FOTT, thank you.