The Other Avian Visitors

On Saturday morning, while I was uploading the photos of the Common Yellowthroat in the apple tree, a flock of at least a dozen of these flew into the same tree. 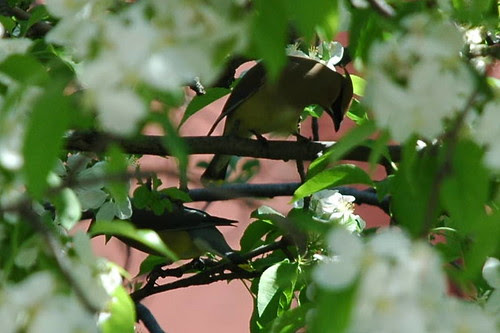 I noticed the crests, but couldn't make out much else of them. I wasn't able to id these birds until just now, when I took my first look at the photos. I didn't say anything about them earlier because I didn't want to promise something and not deliver! As before, most of the shots were of branches, foliage, and flowers. This was the best of the bunch. I was further frustrated by the fact that, when they nosily arrived, my compact flash card was busy copying the previous photos to my hard drive. I couldn't get the card back into the camera to take more pictures until that was done, which cost me precious minutes. Time to get another card, perhaps.

This is a lifetime first for me. As far as I know, I've never seen this species before. And there they were, just 10 feet away from me standing in my tree fort in Brooklyn. When I was looking at the photo above, I showed it to my partner. I asked, "Do you have any idea what this is?" I didn't know. I thought I didn't. Then I said, "I have an idea. Maybe it's a waxwing?"

Where does that come from? At what point in my life did I subconsciously absorb the keys for Cedar Waxwing to the degree that when I saw a bird I'd never seen before, that was the first thing that came to mind?!

Again, the photo above is a crop of the original, though not as tight a crop as that of the Yellowthroat, so they should be easier to find. Here's the original, full-frame image. Can you spot the waxwings? 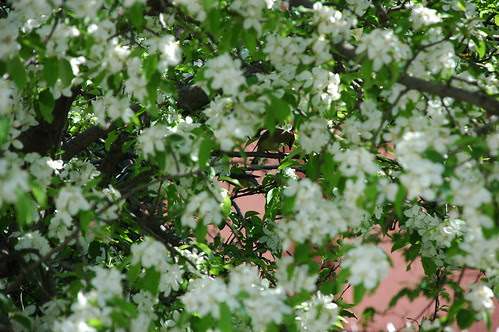 Congratulations - always exciting to see a new and different bird. I expect that's what got most of us into birding in the first place.

Nice pictures under difficult conditions! I remember how excited I was the first time I saw a cedar waxwing - such elegant-looking birds. They come around for the holly berries in the fall, but I've only seen them once in the spring.