Back in the Day

2008.03.10: Welcome - I guess - New York magazine Intelligencer readers. I encourage you to read my post about the BlogFest itself, which inspired this "hyperniche nostalgia," as NY characterizes it. (Shouldn't that be hypo-niche? sub-niche? micro-niche?)

I wrote the following as part of my Brooklyn Blogfest coverage. I now find myself in the position of being one of the coordinators of the first Brooklyn Blogade Roadshow, which it is hoped will take the spirit and energy of the Brooklyn Blogfest on the road to different neighborhoods in Brooklyn. I hope to provide details of the inaugural event later tonight or this week.

I'm highlighting this bit of autobiography and technology history in its own post here because it expresses what I'm trying to bring of myself to this first event.

Back in the Day

Gather round me, children. Close your eyes, and try to imagine it. It was long before the Web, when the Internet existed only in military and select academic settings. It was the time before GUIs, before mice and color monitors, when MS-DOS and 1200bps dial-up modems roamed the Earth.

There were these things called computer bulletin board services, BBS for short. Your computer told your modem the phone number of the BBS. Your modem dialed, their modem answered, and both modems connected with each other. Then your computer could talk to their computer. Directly. No Web, no Internet. Machino a machino. You could leave messages for other BBS members; the precursor of email. You could even chat with someone else who was also logged in; the precursor of IM today.

I was a member of a BBS based in New York City called The BackRoom. It was, as one might guess from the name, a gay BBS. It was an online community of gay men, mostly, living in NYC, mostly. We had handles, like CB radio users (1970s technology). My CB handle in the 1970s, 30+ years ago, was Green Thumb. My BackRoom handle was Crazy Diamond, after the Pink Floyd song, "Shine On, You Crazy Diamond."

Donor Recognition plaque on the wall of the second floor landing of the center staircase of the NYC Lesbian, Gay, Bisexual and Transgender Community Center. 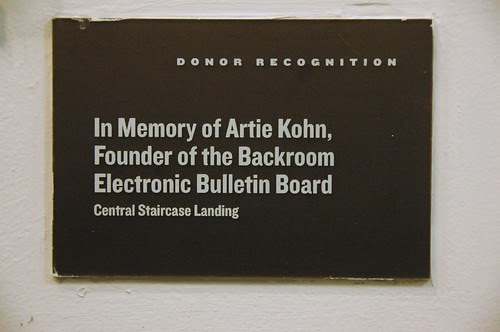 We were an online community. A community of humpy nerds, of which I was one. We were not only virtual. We also met, face-to-face, at a periodic event called the Backroom Bash. Sometimes we met at a bar, sometimes at the home of a member or the Backroom founder and sysop, Art Kohn. We built community online, with handles and anonymity. We met in person, still with our handles, and less anonymity, and built community there as well. Our virtual community was enriched by our interactions in 3D, and vice versa.

Last night [the Blogfest] reminded me of that.

Wow...you got in on the "ground floor" of this technology for sure! Handsome picture...I love the big lenses on your glasses! :)

Dope On The Slope said...

A pioneer in 3D amplification of virtual networkification is on the road again!

Soon, we'll just beam ourselves into each other's living rooms (by invitation, of course).

Sysop! Haven't heard that word in a while. I wasn't exactly on the cutting edge, but my brother had one of those old Atari computers that you programmed with a cassette tape. :)

My first computer didn't have a hard drive, though. Hard to imagine nowdays.

Lisa: My earliest online experience goes back even further, to 1973, the CB era. Our math classroom had a terminal with dial-up access to a BOCES-hosted system. That was before modems as we know them today; we had an acoustic coupler and TTY.

I only wish I had been part of the "real" Internet, when it was just educational and military institutions.

DOTS: Yep, causing trouble wherever I go. It's interesting that few channels of communication, once created, ever go away. They just get added to the possible modes. We hunger for immediacy in our contacts at the same time we want to keep our distance. We're a strange species.

Rurality: My first storage medium was paper tape. Paper! It was about an inch wide and had holes punched across its width. The combination of holes determined the character: letter, digit and so on. I think it was an ASCII representation, so it had an "alphabet" of only 127 codes.

Some day I'll end up as a tour guide at a computer museum. Or as one of the exhibits.

Hey, I remember you and me and Susan L. playing lunar landing on that DEC10; Mr. K was patient with us.. I kept having to take the late bus home... I am a computer wrangler (Forestry Research) these days, but I sometimes think we haven't really improved the productivity quotient (as I wait. and wait. and wait for my machine to be fixed) and I long for that paper tape....

Wow, Sully! You found me! I don't know what to say. Drop me a line! My email is in my profile.

Yeah, paper tape. I remember spending long hours at the TTY, running my Life program I wrote in Basic, and adapting it for crude environmental simulations. I guess my interests haven't changed much. I wish I still had that little spool of oily tape.

Shine on, you crazy diamond!

Thanks for alerting me to this.

Elizabeth: Shine on, indeed! I was a big Floyd fan. Thanks for stopping by!

Hi, it's Jason Scott, creator of the BBS Documentary. (www.bbsdocumentary.com). I, for one, certainly appreciate your nostalgia for that time, it's why I spent so much time interviewing people, including Jon Larimore of the Gay and Lesbian Information Bureau (GLIB), a gay BBS in the DC area.

If you have any artifacts from that time, I'll happily add them to my archives at textfiles.com.

That must have been quite a time. Harrowing in a way, as youth almost always is (except, because we are young we do not know it).

Gosh. An (at the time) deadly (and socially/irrationally feared) disease was sweeping through communities like yours in all the cosmopolitan cities... safe havens for men and women of "alternative" coding.

I think of myself (because we ALL think of ourselves) and recall lonesome online "conversations" as a young man. I'm 40 now and so it was IRC. Chat.

Youth is hard, but we can take it.

For me, it was lonely enough looking for an interesting-safe-attractive young woman who liked me. And that was "normal."

I look at that photo of the plaquard to your friend who is obviously gone now, and I think of so many things. I'd hope to be remembered a kindly by the people who cared (even a little) about me.

I am moved by this post and I'm not certain why. It has nothing to do with me... and yet everything.

Thank you for posting.

Gosh, I thought I was the last one left who remembered dial-up and ARPANET and BITNET. When I tell younger colleagues that I met my husband online, I have to explain that it wasn't on the Internet. And what online was before the Internet.

Not only my husband, but some of my best friends came into my life that way. Long distance charges (remember those?) meant a lot of us only belonged to a local BBS or two, and meeting in person was easier.

I've bookmarked the bbsdocumentary (thanks, Jason) so I can go back and look at it later, but was mildly annoyed when one of the suggested tags was "history." It felt much like hearing a song I remember played as an golden oldie.

Good luck with the Blogade - it's fun to watch that grow, even from this distance.