Flatbush Rezoning Proposal will define the future of Victorian Flatbush 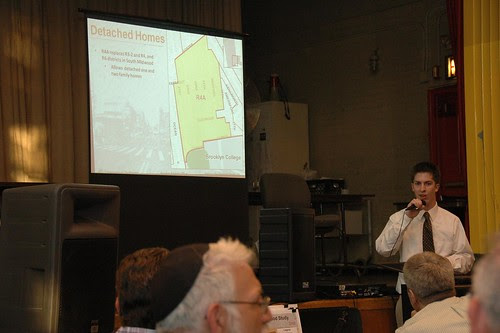 Last night I attended Brooklyn Community Board 14's (CB14) preliminary public hearing on the NYC Department of City Planning's (DCP) rezoning proposal for the northern half of CB14, ie: Flatbush. I didn't take a head count, but roughly 100 people turned out to attend the hearing in Public School 249's uncooled auditorium. CB14 chair Alvin Berk informally explained the context and ground rules for the meeting, then officially called the hearing to order at 7:23. After the school guard kicked us out - gently, but firmly - after 9:30pm, conversations continued onto the school plaza and sidewalks. I didn't get home until well after 10pm last night.


Some highlights:
My report will necessarily be incomplete. This was the first time I've ever attended a public hearing, so I had only a general idea of what to expect. I had not seen the details of the proposal prior to the meeting. My main purpose in attending the meeting was to learn more details. Unfortunately, there was no opportunity to study the large, detailed exhibits that DCP brought with them. There was only the presentation, and I was writing furiously to try to capture details as they were presented. I also had an opportunity to speak during the public comments section of the meeting. After I spoke, I was out of the room for a few minutes while I (unsuccessfully) sought water. I missed a few speakers during my absence.

The study area encompasses nearly all of the northern half of CB14. Here's a detailed map of the study area provided by DCP.

Boundaries of the Study Area 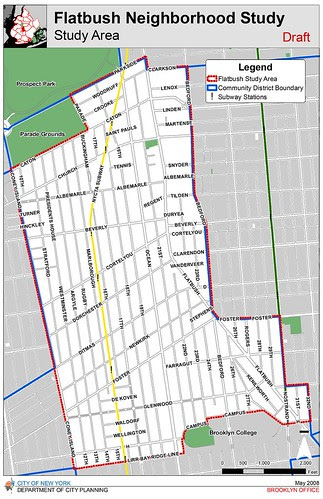 This map of the existing zoning districts was also provided by DCP. To view the map more clearly, follow the link from the map to its Flickr page (just click the image), then select All Sizes > Original. 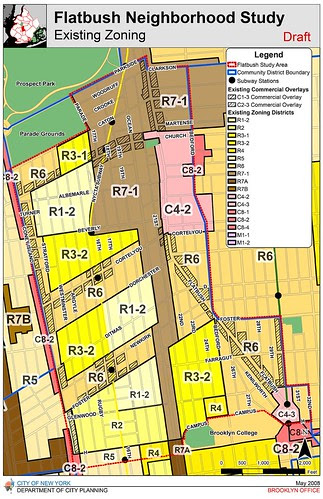 Nearly all of the study area is zoned for residential use. The few commercial-only districts are at the edges. The C4-3 district at the southeast corner of the area is Brooklyn Junction, the intersection of Flatbush and Nostrand Avenues. The largest commercial area is the C4-2 district on the eastern boundary of the study area. This is bounded roughly by Flatbush and Bedford Avenues on the west and east, and Church Avenue and Cortelyou Road on the north and south. Important commercial/retail landmarks in this district include Sears and the Kings Theater. 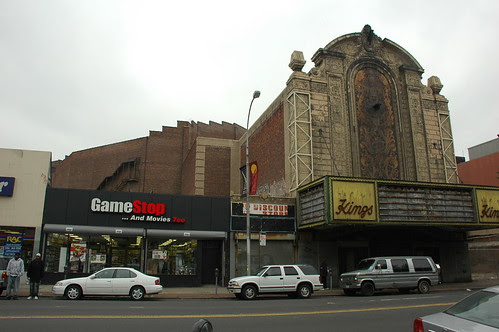 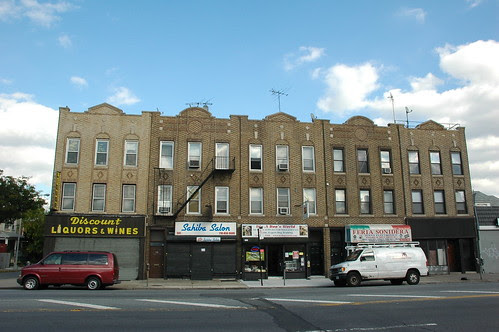 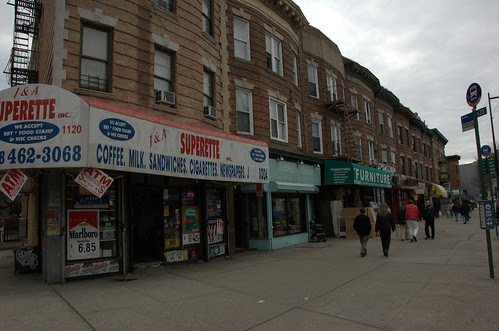 Newkirk Plaza, looking south from Newkirk Avenue toward Foster Avenue. The subway cut is on the right of the photo. 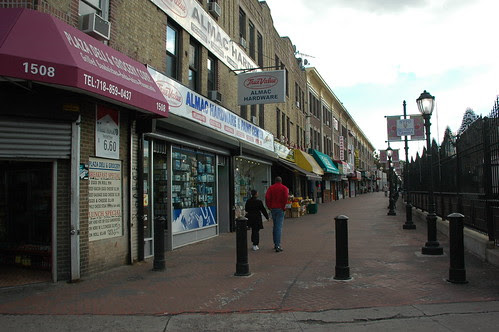 Within the study area, there's a wide range of density in residential districts, from R1-2 to R7-1. R1 through R5 are lower-density districts. R6 and R7 are medium-density. There's also a wide range of housing types.

There are three landmarked historic districts typified by free-standing homes. You can easily locate these on the map by the R1-2 districts. From north to south, they are Prospect Park South, Ditmas Park, and the recently approved Fiske Terrace-Midwood Park. Midwood Park is the southernmost R1-2 area, and Fiske Terrace is the R2 area just south of that. Both R1-2 and R2 allow only single-family detached houses.

Our detached houses are not limited to the landmarked areas. The majority are not landmarked, occupying residential zones ranging from R2 to R6. Those in R6 zones - including those in my neighborhood of Beverley Square West - are at greatest risk.


Summary of the Proposal

The proposal is still only a draft, so all the specifics are still subject to change before the formal proposal, which kicks off the ULURP process. There are four major goals for the rezoning:
In rezoning projects, one of the things DCP looks at is "non-compliance": does existing development on a site comply with what's allowed by its zoning designation? Non-compliant and under-zoned describe the same situation: the former applies to the house, the latter to the zoning of the property. Non-compliant does not necessarily mean illegal. The conditions may have pre-dated the zoning; in a neighborhood of homes over 100 years old, they likely do. To understand non-compliance, we need to know the current zoning designation and what it permits.

Beverley Square West is bounded by Beverly and Cortelyou Roads on the north and south, and the B/Q subway cut and Coney Island Avenue on the east and west. The homes here are detached, single- and two-family homes with peaked roofs, most of which were built in the late 1890s and early 1900s. Most of the lots are 50 feet wide by 100 feet deep. 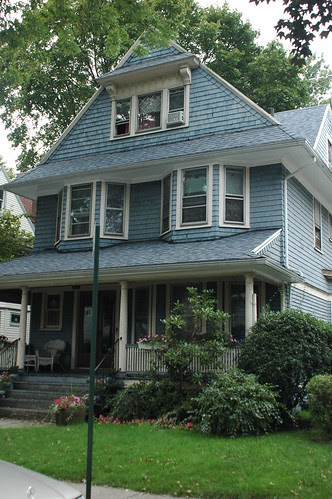 This map shows the outlines of buildings on all properties in the area. The detached homes stand in contrast to row houses along the southern side of Cortelyou Road and the eastern side of Coney Island Avenue. 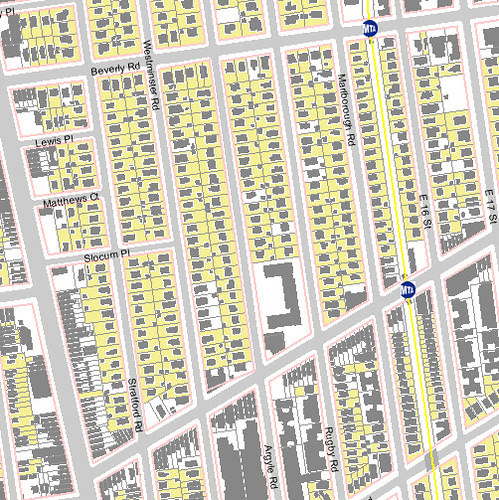 Most of the area is zoned R3-2, with R6 zoned along the western and southern boundaries. 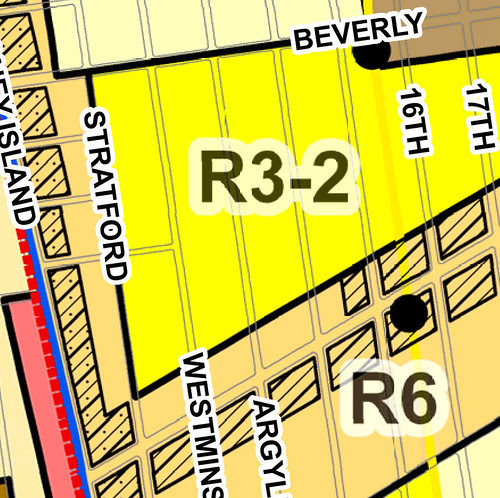 R6 is a medium-density designation and allows for much denser development, typified by this new condo building recently completed at the corner of Stratford and Cortelyou Roads. The R6 districts are at greatest risk from being torn down for new development. In Ditmas Park West, several homes have already been lost to teardown. To achieve the first goal of the rezoning project, preservation of the existing detached homes, the new zoning must allow only detached houses. Zones which permit only such housing are R3A, R3-X, R4A, and R5A. To preserve the scale of the neighborhoods, the new zoning must come close to the existing FAR of the homes already built. Both R3A and R3-X share the .6 FAR of R3-2. R3-X has the larger minimum lot width, at 35 feet. Of currently available zoning designations, R3-X comes closest to what's already in place in Beverley Square West. In fact, the current draft of DCP's zoning study proposes R3-X for both Beverley Square West and East.

A house in South Midwood 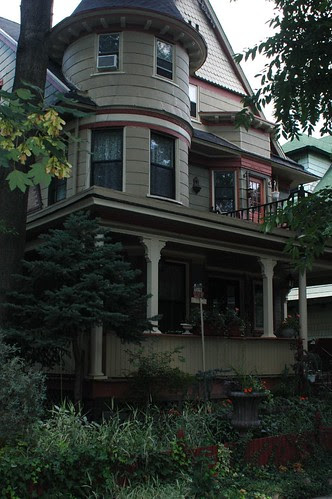 Many of those attending the meeting seemed to be from South Midwood, one of the many neighborhoods that comprise the "Victorian Flatbush" part of Flatbush. The current and proposed zoning for this neighborhood provides a good case study for what's at stake: the risks to the area from current, inappropriate zoning; the strategies DCP employs when trying to select new zoning most likely to be approved; and the issues with the new designation DCP selected. Also, it's the only section of the presentation for which I got some usable photographs.

This neighborhood was developed at the turn of the 20th Century, before zoning existed. When the current zoning was established in 1961 (more or less), over 45 years ago, there was little consideration for what was already in place, and whether or not the new zones fit the existing context.

Ditmas Park West and South Midwood, the areas to be rezoned R4A, have a mix of zoning, the majority of which is R3-2. As explained above, R3-2 allows a FAR of .6: .5 base, plus an attic allowance of .1. R4A allows a .9 FAR: .75 base, plus a .15 attic allowance. The R4A FAR of .9 is an increase of 50% over what's permitted today. It's this large increase in FAR that raises concerns for residents in these two neighborhoods, who are concerned it will open the door for expansion and enlargement of existing homes, or new development, out-of-scale with the existing homes. 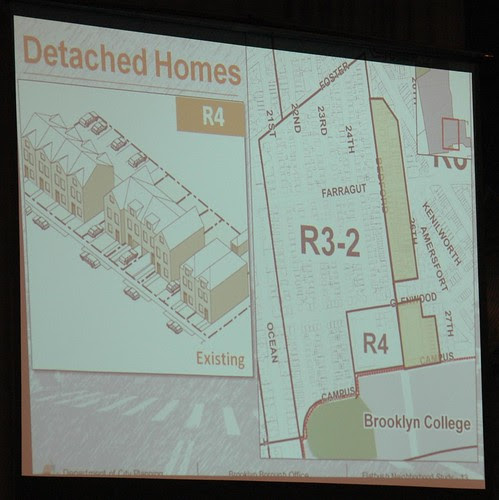 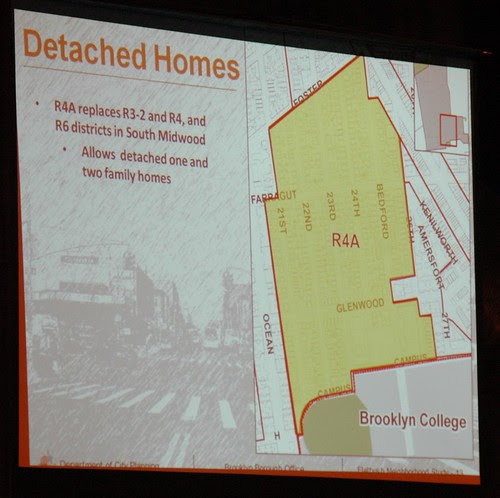 Another house in South Midwood 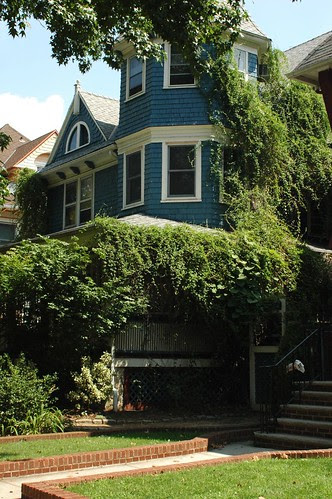 DCP's rationale for proposing R4A over R3-X comes back to the issue of under-zoning. They look at the existing buildings to see whether or not they are compliant with the current zoning. When rezoning, they try to assign a new designation in which 75-80% of existing structures would be compliant. This numeric goal arises from practical and political considerations: they want to minimize objections to the rezoning proposal from property owners concerned that their options for expanding or enlarging their homes are being restricted.

However, the situation here is different. By DCP's calculations, only 51% of existing homes in South Midwood are compliant with the FAR of their current zoning, mostly .6 FAR in the R3-2 district. But the homeowners here are not complaining about lack of expansion options. They are concerned for the future character of their neighborhood caused by an increase in FAR of 50%.

This is one reason why I referred to zoning as a "blunt instrument" at the beginning. There's no zoning designation which permits only detached houses with a FAR between .6 and .9. To reach their goal of 75-80% compliance - a threshold determined by political efficacy, not a legal mandate - DCP has to leap to the next available FAR of .9 in R4A. But this leap has generated opposition which the threshold was intended to avoid. An intermediate total FAR, of .75 say, which would be an increase of only 25% instead of 50%, would be a better fit and would not receive the same level of opposition. Barring creation of a new zoning designation, residents speaking at Thursday's meeting called for a new designation of R3X, maintaining the status quo, instead of R4A, which would open up the neighborhood to out-of-scale development.

Chris: An excellent summery of both the meeting and the zoning issues. I urge area residents to contact the 3 City Council Members who represent the effected area and who all attended the meeting to urge them to intercede with City Planning to establish the R3X zoning for both South Midwood and Ditmas Park West. Councilmembers Simcha Felder, Kendall Stewart, and Mathieu Eugene all seem to support the R3X, but it's important for them to hear from all of us so that they are aware of how important this issue is to the Victorian Flatbush community.

Thanks for your excellent coverage of this issue.

As Victorian Flatbush becomes more discovered, more of a destination, and more desirable, it clearly needs to be protected from overdevelopment in order to preserve its unique architectural and environmental character.

Thanks for outlining this issue in such a comprehensive and compelling form.

Morris: Thanks you. I'm pretty jaded when it comes to politics, and politicians. I hope they get the message.

bb: Thanks. The voices for preservation were loud at the meeting. I hope they are heard.