[Our new report] is part research and part practical guide, and shares key insights gained through having co-created more than 100 Sacred Places across the country in communities, many under-resourced; in prisons, at universities, and in hospitals. A handful of these sites were also implemented as part of an expansive, decade-long design, build, and research project. ...

For the research portion of this paper, we focused our attention on four domains: nature’s impact on individual, community, economic and ecological health. ...

for many of the individual and community health benefits to kick in, people must engage with nature. Spend time in the green space. And this is where Nature Sacred has spent a lot of energy over the past two decades — looking at how to best engage the community and how to best design so that the community embraces, and spends time in, their green space.

These design patterns recur in many different types of gardens, whether intentionally healing/sacred or not.

My backyard embodies all four elements. What follows is an exploration of the history of my backyard, from inception to its current state, viewed through the frame of those four design elements. 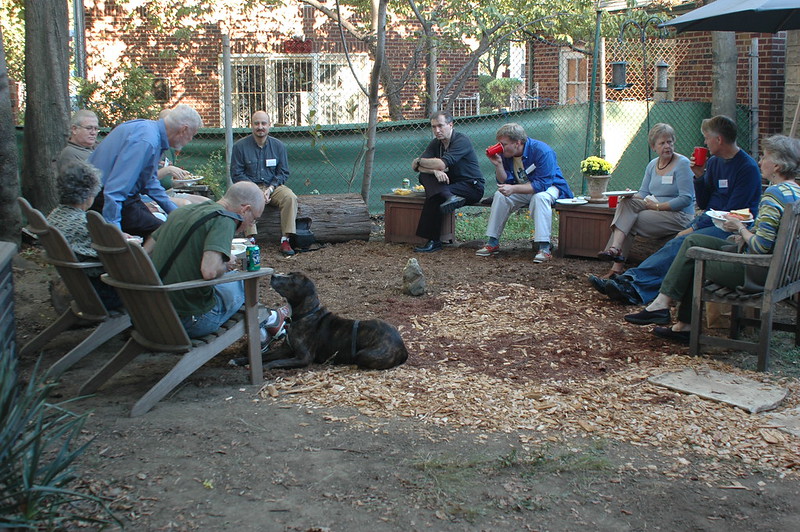 My first sketch of the backyard, just after we bought our house. You can see portals/transitions, paths, seating as destinations, and the surround of enveloping plants. (Even though we had just moved in, I was also fantasizing about changing out the whole back of the house and adding a rear porch to better connect it with the backyard. That never happened.) 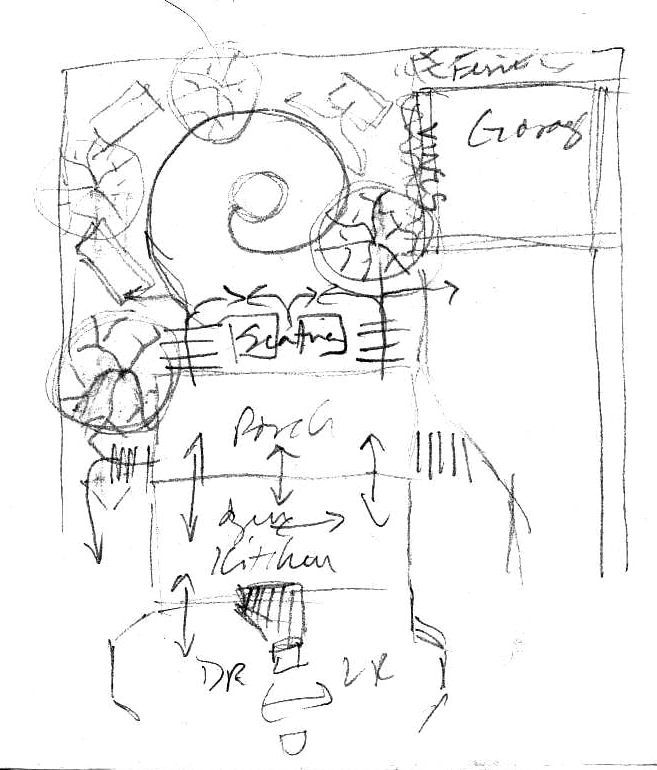 By our second Spring, I better understood how light and shade shifts over the garden throughout the year. The plan is refined and made more specific, less conceptual. The Gardener's Nook is now defined. The driveway-backyard portal shows up: the garage and house both connected and separated by a fence and trellis through which one would pass to enter the backyard from the driveway. 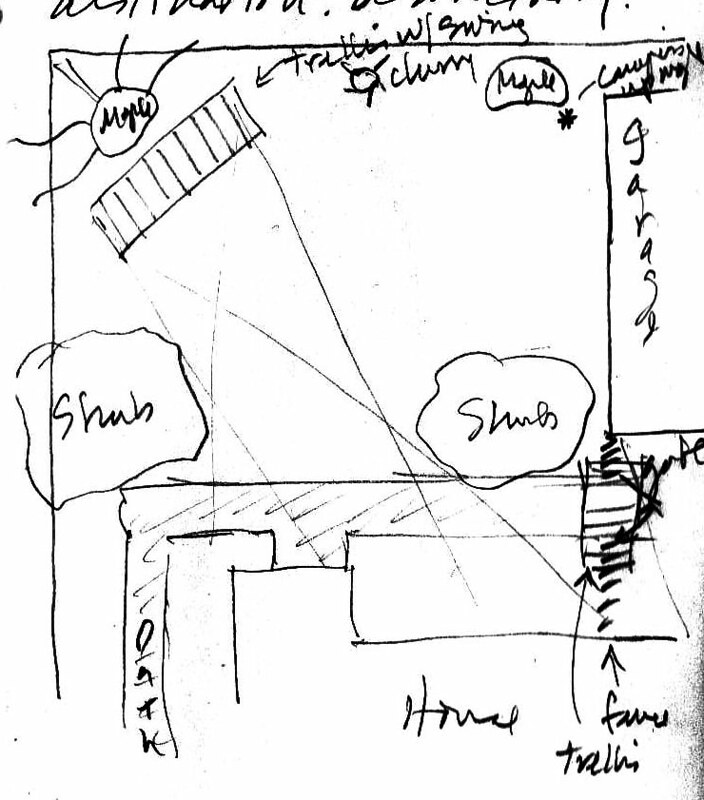 Using the sketch as a guide, the loose circle shown in the opening photo gets tightened up, better defined. Bringing the sketch to life, the desination Gardener's Nook - the upper left of the sketch directly above - makes it first appearance with a pair of Adirondack chairs and some decor. Plants in containers begin to define the surround. An umbrella substitutes for the missing tree canopy. 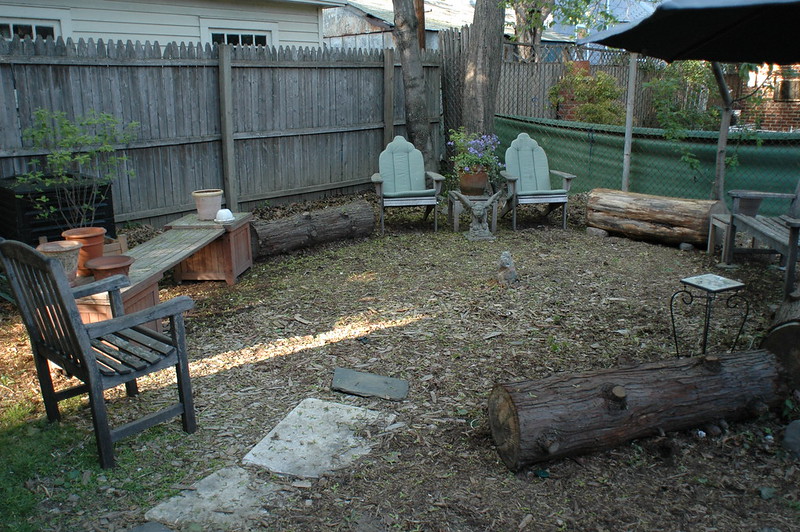 A year after that, things are really coming together. A trellis establishes the portal entrance from the driveway into the backyard. This filters the line of sight into the backyard, which beckons one to venture through, and past. 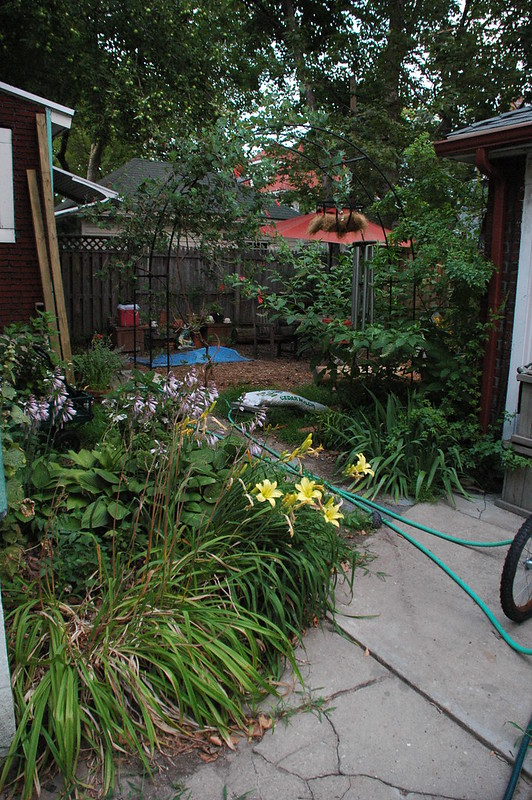 The center of the circle gets filled in. A table both provides central desination, and defines a circular path around itself, echoing the initial concept sketch. Logs double as seating and a layer of surround. The plants are now getting large enough to provide a second layer. My rear neighbor thankfully provided a fence, closing off the backyard and completing the surround. 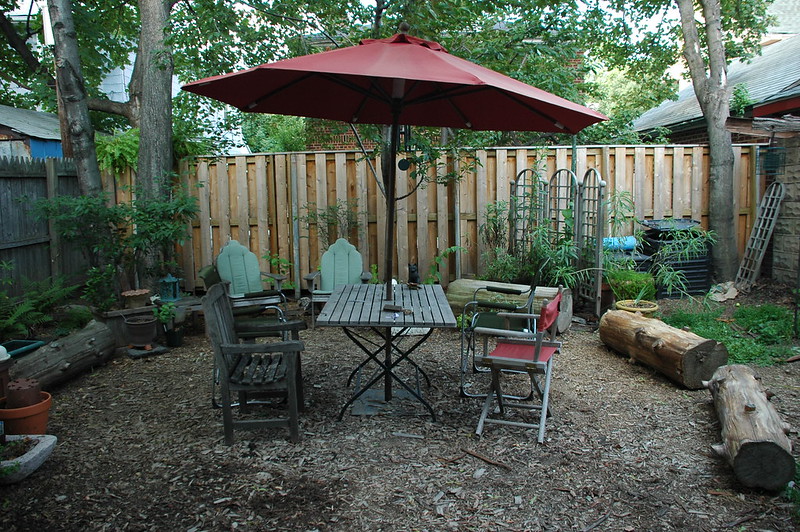 Although the built environment of that design is never realized, the plan and its rough dimensions inform all later changes. Later that year, I transplant a large shrub. This gives the backyard a sense of enclosure, the "surround". 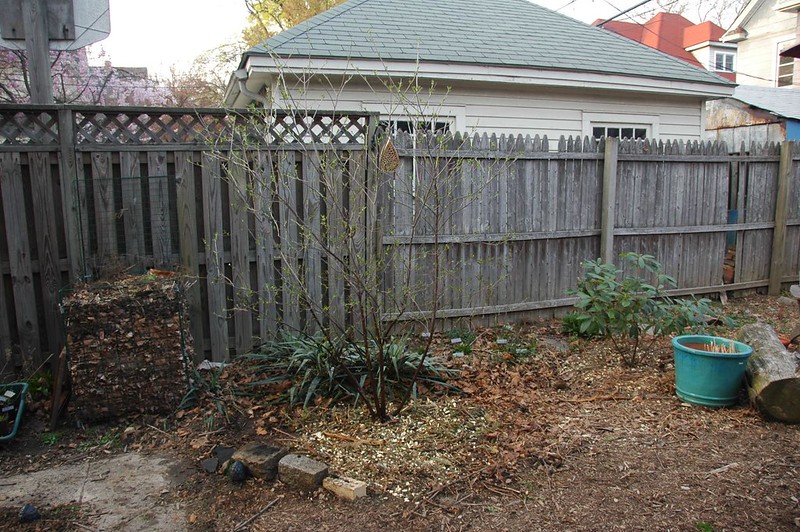 I plant an "understory" tree which will provide overhead enclosure, a vertical surround. As I had specified in my garden design, I selected an Amelanchier, which goes by many wonderful phenologically evocative common names. It serves as a replacement for the old apple tree my north-side neighbors had in their backyard, adjacent to our shared fence. Eventually, it brings back the cedar waxwings I enjoyed seeing amongst its flowers. 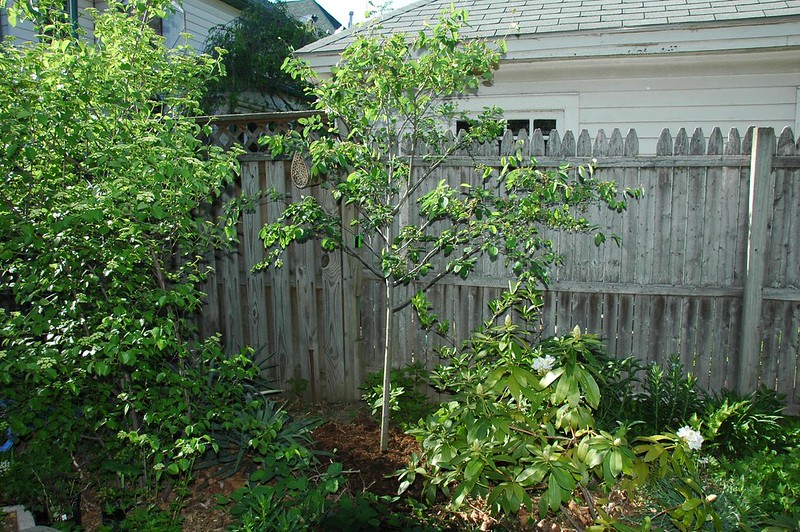 The portal/entrance to the backyard gets a major makeover. I register with the National Wildlife Federation (NWF) as a Backyard Wildlife Habitat. My garden itself becomes a destination, and welcomes its first public visitors. 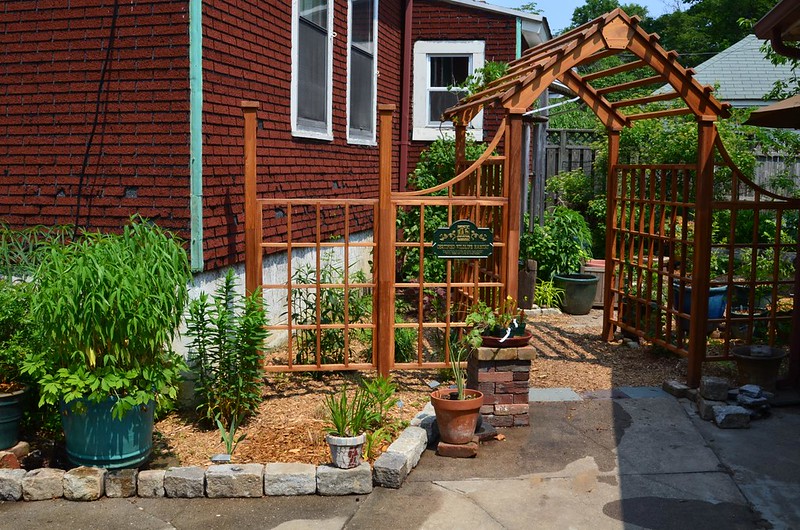 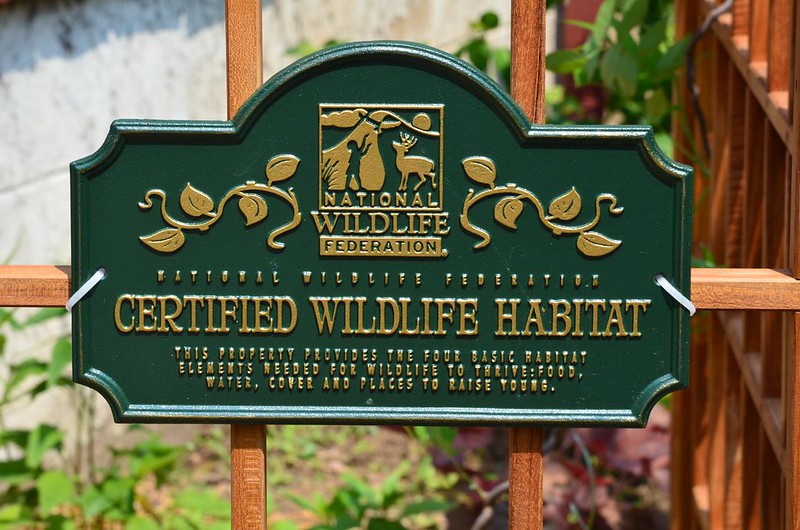 The garden hosts a wedding, its first use as an intentionally sacred space. 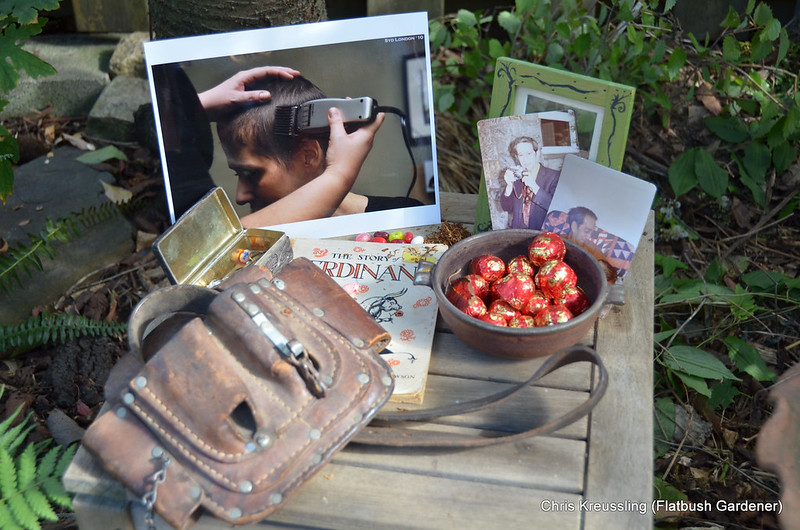 Five years later, the shrubs and other plantings have matured, and the surround of enveloping greenery and flowers has been realized. The Gardener's Nook is now a fully-sheltered spot, a desination tucked into the larger embrace of the garden. 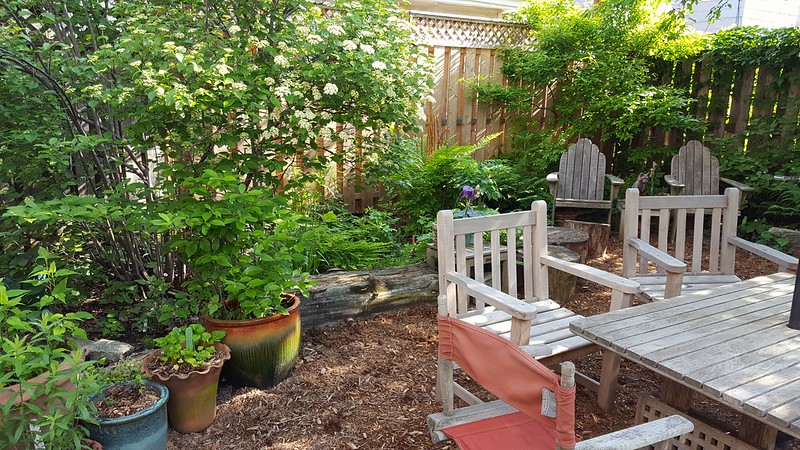 This garden continues to be a sacred/healing space for many over the years. It was sanctuary for our dear friend David. After he entered home hospice, he would call a car service to deliver him to the garden. Here he is in the Gardener's Nook two weeks before he died. 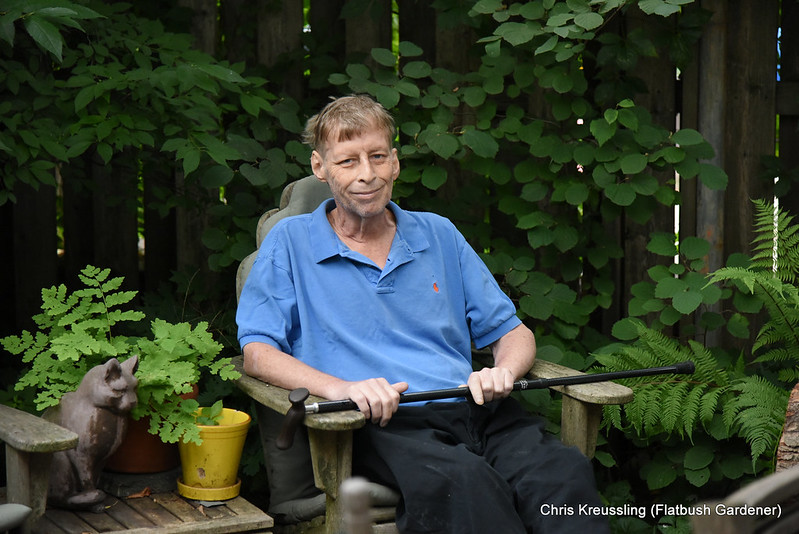 Today, 16 years after that first sketch, the backyard has realized its final form. Visitors say they feel like they've walked into the woods, the highest praise.

Portal, path, destination, surround - all embodied, and felt, in the garden.