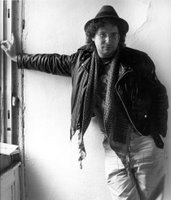 The East Village was the site of my first garden in New York City. My second lover in New York lived in a tenant-owned brownstone on First Avenue. When we were breaking up, he proposed a project for the two of us to work on together: turning the backyard behind the building into a garden. The space was dominated by two mature Ailanthus trees which, along with the buildings to the south, shaded the yard almost completely. On the ground grew nothing but liverworts and Ailanthus seedlings. In and on the ground were the remains of a back building which had been torn down a few years before.

I planned a simple asymmetrical loop of a path around the backyard. I identified a dozen different beds, based on their light exposure and site along the path. We started a compost bin. We weeded, and shredded and composted the remains. We sifted the soil to remove the building debris from the dirt. The soil level dropped by a foot in some places. We set aside the usable brick and stone. These became the paths and retaining walls of the new garden. We amended the dirt as best we could with organic fertilizers and bales of peat moss. (These days, I use coir, produced from the husks of coconuts during processing, instead of peat. Peat is not a renewable resource, and its harvesting destroys wetlands.)

We planted bulbs in the fall. I labelled everything. Friends remarked that it looked like a plant cemetery. In spring the first bulbs came up. We were ecstatic.

The garden continued to be developed and enhanced over the next few years by us, building residents, and other neighbors. One of the residents, a carpenter, built a deck over the broken concrete patio. One afternoon we had a load of topsoil delivered. Since there was no access to the backyard from the street, the truck dumped it all in a pile on the sidewalk. Neighbors pitched in and, with shovels, buckets, and a wheelbarrow, moved the soil through the building to a new pile in the garden. We learned about shade gardening. Wildflowers, ferns and hostas created a shady, green, cool oasis - a sanctuary from the noise and heat and, to be honest, stench of the street.

It took five years for the garden to feel completed. I continued to care for the garden until I moved to Brooklyn in the early 1990s. All my records and photographs of the garden over those years didn't make it with me.
Posted by Chris Kreussling (Flatbush Gardener) at 5/16/2006 12:46:00 PM