In the first Imagine Flatbush 2030 workshop, we enumerated "Assets" and "Challenges". At our table - and it sounded like the experience was shared at others' - where someone lived emerged as a primary determinant of what appeared in which category. Sometimes shared concerns, such as transportation, appeared as both an asset and a challenge, depending on where one lived. It became clear to me that the lines can be sharply drawn, sometimes block-by-block.

I'm a newcomer to the area, having moved here only in Spring of 2005. I researched more and more about the area and its history as we committed to buying a home and moving here. I've still only visited a small portion of Flatbush. IF2030 is making me curious about exploring more of it.

Part of what I want to explore more of is literally "on the other side of the tracks" from where I make my home. The B/Q subway line runs through this neighborhood as an open trench. There are several places where there is no crossing, and the cut forms a geographical barrier, a steel river, separating one side from the other. It wasn't always so. With homage to Forgotten NY, here's a little piece of Flatbush that's not quite forgotten, still part of living memory, the Albemarle Road pedestrian bridge.

Google Map of the location of the old Albemarle Road pedestrian bridge. 143 Buckingham Road is also highlighted; it's a landmark in all the historical photos of this crossing. The markers show where I took the photos for this article.

The BMT as I remember -- never rode it much, but had relatives on East 17th & Beverley Road. We would always go to the Albemarle Road footbridge by the tennis courts over the BMT cut, and watch the trains.
- Steve Hoskins, SubTalk Post #93389, NYC Subway 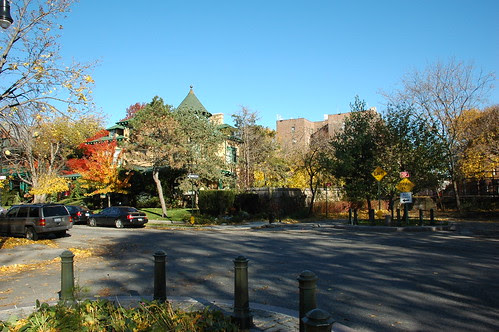 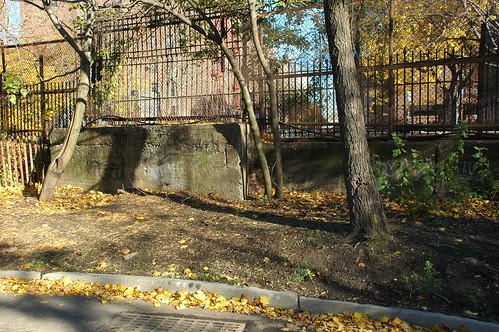 “I seem to have a memory - or is it just a dream? - going back to my earliest childhood, associated with a place about a mile in a different direction from where I lived, towards Prospect Park: it is a stretch of about five blocks of Albemarle Road, going from the Brighton subway underpass to Coney Island Avenue. One got there from our side of the subway tracks by crossing over on a small footbridge. On the far end of the bridge, Albemarle Road suddenly widens, and in the middle of it there is a traffic island, covered with trees and extending a 11 the way to Coney Island Avenue; there are also trees on both sides of the street. My first encounters with this scene are in my memory entirely intermingled with my dreams of it, a recurring vision of overwhelming loveliness at the edge of things, beyond which something entirely new and different must lie.”
- Ronald Sanders, A Brooklyn Memoir, via Living in Victorian Flatbush

Western Dead End of Albemarle Road near East 17th Street. 143 Buckingham Road is at the right of the photograph, across the tracks. 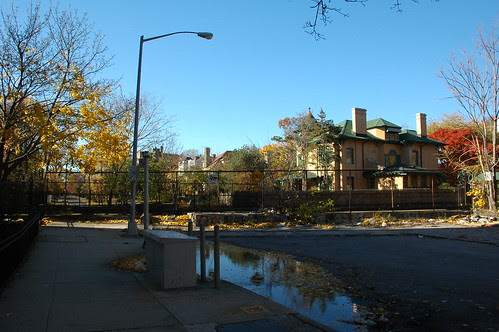 East Foundation of Albemarle Road Pedestrian Bridge. 143 Buckingham Road is in the center, across the tracks. 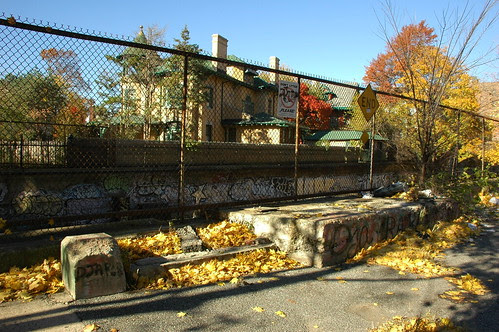 Albemarle Road is interrupted by the subway cut for the B/Q lines. In the late 19th Century, several rail lines were developed to take passengers from the City of Brooklyn, what we now think of as downtown Brooklyn, through the other villages and towns such as Flatbush, to the beach resorts on Coney Island and Brighton Beach. By the 1870s the Brooklyn Coney Island Railroad ran along Coney Island Avenue. By the 1890s, the Brooklyn, Flatbush and Coney Island Railroad (BF&CI) ran along what is now the current route of the B/Q subway line. Most of Flatbush was still farmland at the time. When the Flatbush farms were sold and the area was developed at the turn of the 20th Century, the tracks still ran at grade.

In this 1873 map of Flatbush, Prospect Park and the Parade Grounds are already laid out to the north, and the Brooklyn Coney Island Railroad runs along Coney Island Avenue. On this map, Parkside Avenue is named Franklin Avenue, Church Avenue is named Church Lane, and Cortelyou Road is named Turner Harrow (or Narrow?) Lane. The Waverly Avenue shown on this map no longer exists; it's later replaced by Albemarle and Beverly Roads Road, whose future locations are shown, but neither named nor yet built. The future route of the B/Q line is not shown. The families whose landholdings and houses appear on this map lent their names to several streets and neighborhoods: Turner, Hinkley, Ditmas and Vanderveer. 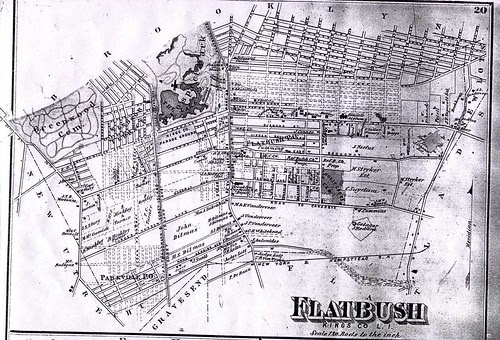 In an 1888 USGS Survey Map of Brooklyn, just a small portion of which is shown here, Waverly Avenue has been "de-mapped." The roads built in its place, unnamed on this map, are Avenues B and C; these will be renamed later to Beverly and Cortelyou Roads. Between them run East 11th through East 14th Streets; in the early 1900s, these will be renamed to Stratford, Westminster, Argyle and Rugby Roads to cash in on the cachet of Prospect Park South. The BF&CI, which began service in July 1878, is also now in place. East of that, the eastern half of Avenue A (Albemarle Road) has been built, along with East 17th through 19th Streets. 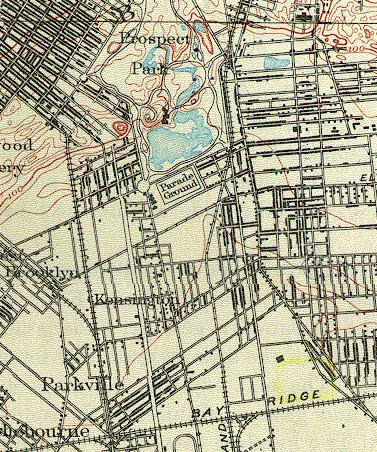 Through the early 1900s, all these railroad lines ran at grade, at street level. There were also trolley lines, at first horse-drawn, then later electrified, on many of the crossing streets. Development brought a burgeoning residential population, more traffic, and more traffic conflicts and accidents. The decision was made to separate the rail and street traffic by moving them to different levels, passing above and below each other.

This photo from the 1918 "Reports of the Brooklyn Grade Crossing Elimination Commission" shows the Albemarle Road Footbridge. The line has been widened to four tracks and now runs below grade. Today, the local Q train runs on the outer tracks, while the express B runs on the inner tracks. 143 Buckingham Road is visible on the upper left of the photograph. Thanks to Art Huneke for permission to use this photograph. This photo appears on his page Brighton Beach Line, Part 3. 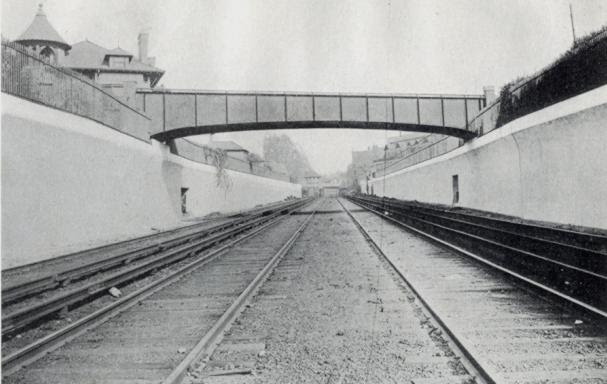 The physical contrasts could hardly be stronger across the tracks: a wide, tree-lined boulevard with large, detached wood-frame houses on one side, and tall, multiple-unit residential buildings with few trees on the other. It is tempting to imagine what it would be like to restore the pedestrian bridge, eliminating at least a geographical barrier between these two halves of the same neighborhood. Would it help us to make other connections, to recognize our common assets and challenges, and work together to create a future we can all live with?