The Future Home of the Ex-Lax Gardens 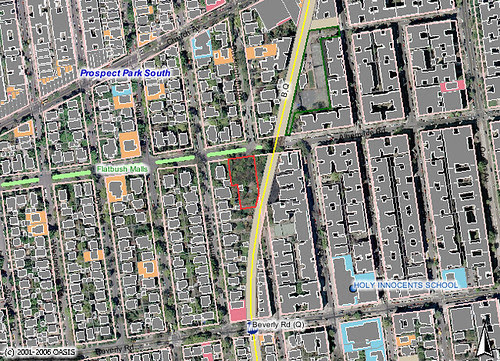 This map highlights the future location of a new community garden to be created in Flatbush, in the neighborhood of Prospect Park South. The red border outlines part of the property, which also includes the smaller wedge of land to the east, next to the B/Q subway line. The underlying image is aerial photography from 2004. The gray shapes are the outlines of buildings. The gray box within the red border is a garage, which you can see in the photos below.

The total area is .8 acres, huge by city standards. You can see from the photo that the property is covered by trees. The property is vacant, but not abandoned. It's owned by a resident of the area who wants it to benefit the community, as a community garden.

Susan Siegel, outgoing Executive Director of Flatbush Development Corporation, has been in communication with the owner of the property for some time. I first heard about this project in February of this year from Jan Rosenberg of Friends of Cortelyou and Brooklyn Hearth Realty. I attended a meeting of some interested community members. Things have been quiet until this week, when Susan let us know that the owner has given us the go-ahead.

The site has an interesting history. As my neighbor, Erin Joslyn, notes, this was originally the home of Dean Alvord, the developer of Prospect Park South, later purchased by Israel Matz:

One of the most impressive homes in Prospect Park South, was the enormous mansion purchased in 1920 by Israel Matz, founder of the Ex-Lax company. After years of neglect, it was consumed by fire in 1958.
- Forgotten Flatbush: When Flatbush was Greenwich, Victorian Flatbush, An Architectural history

The forest which lives on the site now is just 50 years old, grown since the building burned down in 1958. "Forgotten Flatbush" includes an old aerial photo of the area from 1908, a hundred years ago, which shows the old "Ex-Lax Mansion", and the future location of the community garden. The trees for which the neighborhood is known are absent from the photo; they were just a few years old.

Here are some views of the site, taken last April. 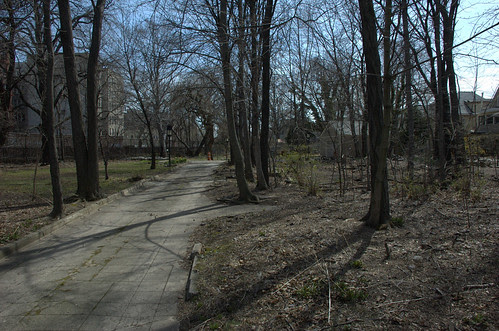 This is the view south down the central drive into the site. The garage is on the right. There's a lamp post on the left, with Daffodils blooming at its base. Not visible in this photo, the house foundation is to the right. 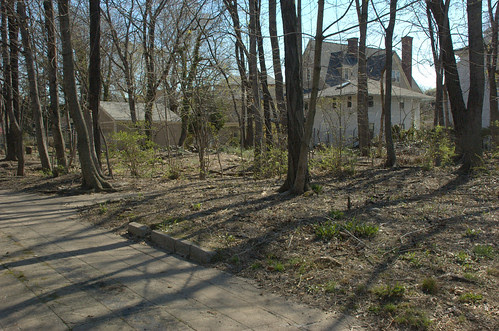 This is a view southwest, to the right of the central drive. The garage is to the left. The area in front of the garage and extending to the right is where the house stood. 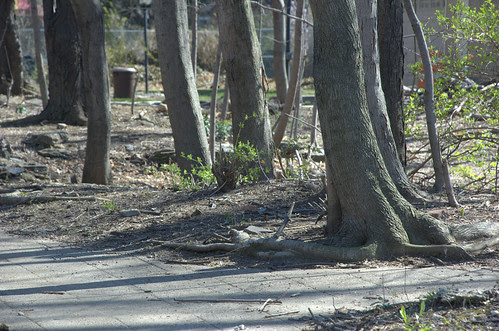 The sunken area in this photo is part of the original foundation of the house. 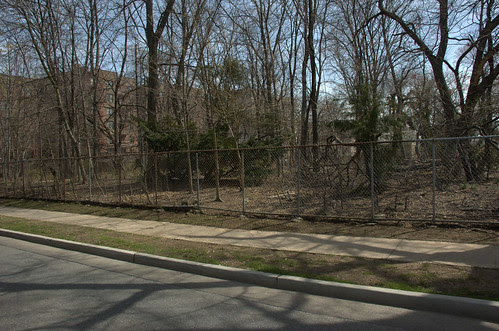 This view is southeast. You can see the garage in this view, too. Somewhere between the garage and where I stood, behind the fence on the right, is the foundation of the house which stood there.

Most community gardens don't start with a forest. This presents unique opportunities and challenges. The southern end of the property is already partially cleared and cultivated as gardens. For more residents to grow vegetables, more trees will need to be cleared.

I hope that the northern end, at least, can be kept forested. Many of the trees are likely "weed" trees, invasive species, which can and should be removed. There is already wildlife there, and this part of the property could be preserved as a wildlife and bird refuge and sanctuary. There could be wildflower walks and native plant gardens, cool ferny sanctuaries, shady refuges, and story circles.

The foundation of the old house is largely intact, now largely filled in by a half-century of leaf litter and plant growth. This could be cleared and restored. This could become an educational part of the site, evidence of its history. I have visions of developing it as a sunken garden, a grotto of native plants and ferns, which can fulfill other important educational purposes.

Now that the owner has given their go-ahead, there will be many community meetings and other events for those who want to participate and contribute. I'll post these here on this blog and add them to the calendar in the sidebar.

I took a few pictures of the backyard back in Aug of '06.

Very exciting! I've ridden by several times on my bike since this was announced and am imagining what a beautiful place it can be.

I gotta say though... Ex-Lax Gardens is DEFinitely not working for me! ;)

The house was originally the home of Dean Alvord, the developer of PPS.

I've seen very few pictures of it, but Brooklyn Borough historian Ron Schweiger has a great one. A massive, L-shaped Tudor.

Chris: Thanks! I had visited this once, during one of the House & Garden Tours, but I can't find any of my photos of it. I just added some photos I took from the street this April.

Anne: And "Ditmas Park" is not working for me! I think we should wait at least a year to name it. "Ex-Lax" is just my "working title," since I know it's not going to stick!

Erin: Thanks! I just updated the post with this info. I thought this was Alvord's place, but I couldn't find anything online to confirm it.

On a tour with Ron Schweiger, he pointed out the front steps of Alvord's house peeking out from under the leaf litter. This is an amazingly cool idea--incredible generosity from the owners--who will be eligible to garden/use the space? Only PPSers?

Brenda: I saw your photo on your post from last year with your photo of the old front steps. Very cool.

The idea is to open this up to another from the community who wants to participate. PPS already has plenty of gardening space [g].

We know well the site of the proposed community garden (bravo!) since we lived for 20 years at 159 Marlboro which has the plot at its rear. We moved there soon after the Matz house burned down and built the addition which was used as an office. The Matz heirs, unhappy about paying taxes on the property, donated it to Downstate Medical Center which toyed with erecting a clinic there. It didn't happen. We sold 159 to a young couple in 1978, they soon moved to CA and sold to the Kliots. David did not use the office addition as an office since he already had one down the block. Downstate wanted to unload the property and the Kliots bought it for a nominal sum. It is extremely generous of Harriet Kliot (assuming she is the one involved) to allow the use of this plot as a community garden. We moved to an apartment in Brooklyn Heights some 30 years ago but still think lovingly of PPS and the Matz property.

Lucille & Charles: Thanks for stopping by, and for adding your voices to the history of this space. Yes, Harriet is more than involved. I had the pleasure of meeting her for the first time a month or so ago. We're going to proceed slowly this year, and see how it goes.