Cherry Blossoms from the 2006 Hanami at BBG, one of my photos I've already added to BBG's new Hanami Flickr Group 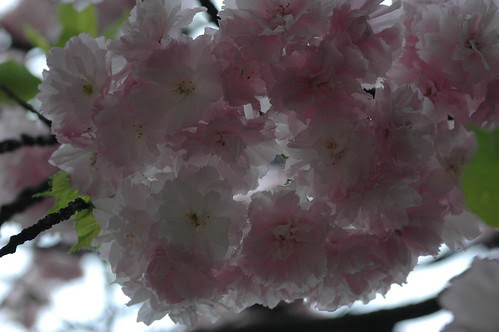 The blossoming of the cherry trees at Brooklyn Botanic Garden is a New York City rite of spring. Hanami is the Japanese cultural tradition of viewing and cherishing each moment of the cherry blossom season.

Join Brooklyn Botanic Garden in celebrating Hanami this year by adding your cherry blossom pictures to our group!

Any Flickr member can join and add their photos. No invitation is needed. At the moment of this writing, there are already 14 members and 20 photos in the pool. We can expect to see hundreds of photos by the end of Hanami.

Earlier this week, BBG contacted me to ask for some suggestions on how to get the group started. Based on those email conversations, and discussions in the group itself, they've come up with the following guidelines:

Any photos you have taken of flowering cherries at BBG are welcome for submission--from any time in the blooming cycle. Hanami is the official cherry blossom viewing season here at the Garden (this year it's from April 5 to May 11), but if you've got shots of early- or late-bloomers, we'd love to see them, too!

Please tag your photos with "Hanami" and "BBG" or "Brooklyn Botanic Garden."

Events and Resources: Hanami and more at the Brooklyn Botanic Garden, April 3, 2007

I just had a look at the cherry blossom photos. Gorgeous! Makes me wish we could go down again to see that...but there's so much more we'd love to see as well, throughout the season!
It was a wonderful day, but we took a few days to recover the lost sleep.
Thanks so much for naming that neat tree and the tulips. I figured you'd know :)
I followed your link and had a look at your Flickr photos. Thanks for sharing those. You're really good with that camera!
We didn't make it over to the rock garden so I appreciated seeing it through your photos. Thanks!

And check out my posts and photos from this past weekend. I'll be continuing that series of posts throughout this week.