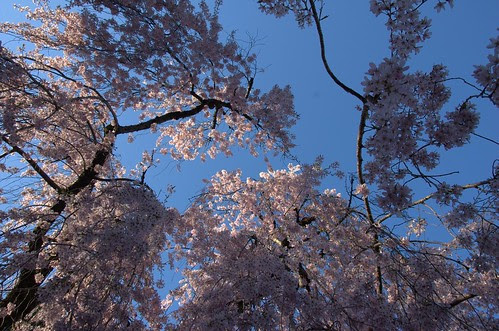 
Mr. Simpson has been really surprised by only one aspect of New York City life, and that’s the unwelcome reception he sometimes get at the site of an imminent tree-planting. Sometimes the residents or homeowners are worried about their allergies (though the trees are intended to help alleviate asthma and allergy rates citywide); sometimes they’re worried that a branch will fall on their car (a call to 311 will procure a free pruning). Sometimes they’re worried about the extensive construction required to plant a tree in a patch of concrete.
- Big City: For Urban Tree Planters, Concrete Is the Easy Part, New York Times, April 21, 2008

For my non-NYC readers, 311 is the city-wide telephone portal for all city services and information. Street trees fall under the jurisdiction of the City's Department of Parks and Recreation.

It was only a year ago today, April 21, that the City announced MillionTreesNYC, a plan to plant one million new trees in NYC over the next ten years. Ancillary laws and regulations have yet to catch up. This has amplified inconsistencies between who has authority, and who has responsibility and liability, for this narrow strip of land that borders streets and private property.

As a tree advocate myself, I'm still surprised by the virulence of opposition to trees - indeed, to any kind of greening - I sometimes encounter. My local community board voted to oppose City Planning's Yards Text Amendment, which will prevent paving over front yards and define minimum open space requirements. I recently provided information to my neighborhood association about how to request a free street tree. One of my neighbors approached me after the meeting and asked me not to request a street tree in front of their house; they want to put in a driveway.

In a dense, urban environment, where every square foot of turf matters, conflicts inevitably arise over how to make the best use of the land. I believe that we can't afford to wall ourselves off, to pave over every square inch, to value, absolutely, individual property "rights" without regard for the common good. It is up to advocates to make the case for the collective benefits that street trees provide, and ensure that the costs and responsibilities are distributed equitably.

You're right [that is to say, I agree with you, but I repeat myself :)]. As a society we don't do well with "greater good" concepts, particularly when they conflict with individual rights or happiness.

Drainage that reduces stress on the sewer system from storm run-off is a popular pro-planting argument lately in San Francisco.

It's great that you have free city tree pruning! Not the case in San Francisco where property owners next to the tree are responsible for pruning. This usually results in sad butcherings by day laborers because people don't want to pay an arborist's fee.

wren: In speaking to opponents, I try to appeal to enlightened self-interest. Their heating and cooling bills are reduced by planting trees. Flooding on their streets is reduced. Can't say whether or not this is a successful argument in the long run, but people will listen, at least, when you talk about their money.

chuck: The city prunes for free, but the infrequency of inspection and pruning is a common complaint. Even after needing notified of pruning needs, it can take years for the city to do so, and a simple butchering may be all the tree gets, after all.

Last night as I was walking home from the subway, I heard a loud, strange noise I couldn't identify. I turned and saw that a large branch from a street tree, which I had just walked past, had just that moment broken completely off. It reached across the street, blocking traffic. Another passerby and I broke it up and moved it to the parking lane and curb. The branch was hollow and swarming with carpenter ants.

Regular inspections are supposed to catch things like this before they come crashing down. Fortunately no one was injured. There wasn't even a scratch to the cars parked on either side of where the branch fell.