Update 2010.01.03: Corrected all links to the old Gowanus Lounge domain to the new memorial domain.
Thursday night I attended the Flatbush Development Corporation's (FDC) 34th Anniversary Benefit Dinner. In my remarks, as one of the honorees, I spoke of the connections and communities that had brought me there that night: my partner, my neighborhood, Flatbush at large, and the Brooklyn blogosphere. I also told the 200+ people assembled there that Brooklyn bloggers had lost one of our own last week: Robert Guskind, founder of Gowanus Lounge, a friend and supporter of this blog and of Flatbush preservation efforts.

I only met Bob in person a few times. We launched our blogs within one month of each other in 2006: Gowanus Lounge in April, Flatbush Gardener in May. Gowanus Lounge quickly became Bob's bully pulpit from which he could speak, as friend and neighbor Brenda Becker phrased so well, as "Fool-Killer and Weasel-Slayer." I don't remember when I first discovered Gowanus Lounge, but the first links from there to this blog appeared in November of that year.

Bob liked - or at least thought least unflattering! - this picture I took of him at the 2nd Annual Brooklyn Blogfest in 2007. 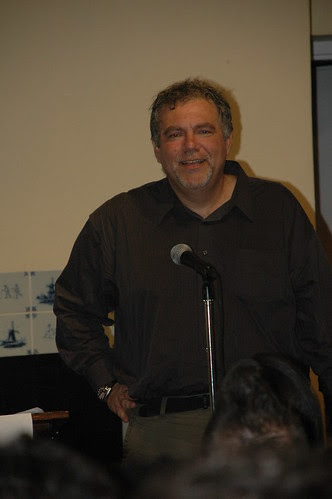 When the Second Brooklyn Blogfest came around in May 2007, we knew each other well from our online endeavors. We didn't get to meet at that time; it was too crowded, and too hectic. Bob, a speaker at the event, was an A-List blogger of the Brooklyn blogosphere, swarmed with fans, colleagues, and reporters.

Dave Kenny, another friend and blogging colleague, and I co-founded the Brooklyn Blogade as a way to continue the energy and relationship-building from the Blogfest, and expand into neighborhoods that were "underserved" by the Brooklyn blogosphere. Dave credits a discussion with Bob after the 2007 Blogfest as inspiring him to start the Blogades. With Anne Pope of Sustainable Flatbush, I co-hosted the first Blogade here in Flatbush in June 2007, and that's where Bob and I finally got to meet in person. The New York Times covered that first Blogade; a photograph from the event opens their article in this weekend's The City section on the future of Gowanus Lounge, the first time any of those photos have appeared.

I met Bob again on only two occasions after that. Most of our communication was online, through email, tips, and mutual links. I don't know how many scores of times Bob linked to this blog. I was especially touched by his last link at the end of January, in which he referred to me as "a friend and fellow blogger." As I write this, I still can't believe he's gone. We were the same age, and I wish there had been more opportunities and time for us to strengthen that friendship.

As many others have reported in their remembrances of him, Bob was generous in linking. He brought attention to many neighborhood issues that, I believe, without his support would have been overlooked not only by the general press, but other bloggers as well. He nurtured community in the Brooklyn blogosphere. When I reached out to him by email during lasts fall's hiatus on Gowanus Lounge, he said that he had received "hundreds of emails and comments." In response to his death, nearly 80 people have written their own condolences and memorial posts to Bob. There are many hundreds more comments across all those posts. That stands as a testament to the impact he has had, and will continue to have after his death.

He was generous and passionate, sensitive and courageous, humorous and outspoken, gregarious and private. I have learned only since his death that we shared a journey in recovery, different in the details, similar in struggle and spirit. I did not know Bob well enough or long enough to know the circumstances of his life or death. Whatever the circumstances, I have nothing but empathy for the man; they cannot diminish my opinion of him. Real people are complex, their circumstances, usually complicated. It's cost me a lot to learn that.

This was Bob's favorite of my photos. I know this, not only because the subject shows Coney Island - among Bob's greatest passions - in its glory, but because he chose this from the Flickr-Moo mini-cards I handed out at 2007's Blogfest and the first Brooklyn Blogade. If there is a heaven, may this be part of Bob's. 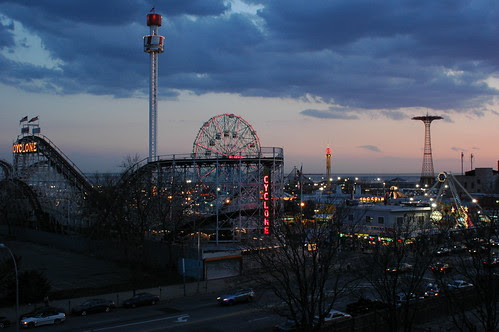 Wonderful, lovely post honoring Bob. I had just finished reading the NYT article when I started running through my daily "reads" - which naturally include this blog. I've found that it's a lot less fulfilling now without GL posts; although I'm sure that will change - as I think RG would want it to - as people continue attempting to live up to the bar Gowanus Lounge has set.

"He was generous, passionate, sensitive, humorous, outspoken, gregarious yet private."

Chris, you nailed it. Thanks for that lovely post. Bob had spoken fondly of you to me (old friend).

I am sure he is smiling on us now.

PS: Please stay tuned to GL for info on the memorial to Bob.

I'm afraid I don't believe in any thereafter. I'm glad, and sad, to hear that the warmth was mutual.

Looking fwd to the memorial (TBD).