Gardening with the Hymenoptera (and yet not)

One of the great pleasures of gardening is observing the activity the garden invites. I can lay out the welcome mat, and set the table, but the guests decide whether or not the invitation is enticing enough to stop by for a drink, a meal, or to raise a family. While charismatic megafauna such as birds and mammals are entertaining, the most common and endlessly diverse visitors are insects.

The Hymenoptera includes bees, wasps, and ants. Although my garden also provides amply for ants, we'll stick with the bees and wasps today. Following are some of the few portaits I've been able to capture of the many visitors to my gardens. The pollinator magnet, Pycnanthemum, Mountain-mint, in the Lamiaceae, provides the stage for many of these photos. I'm always amazed at the variety and abundance of insect activity it attracts when blooming. 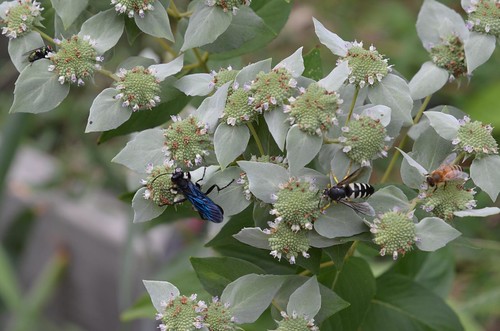 There are over 250 species of bees native to New York City alone. I'm still learning to identify just a handful of the dozens of species that frequent my garden.

My current favorite is the bejeweled Agapostemon, Jade Bee 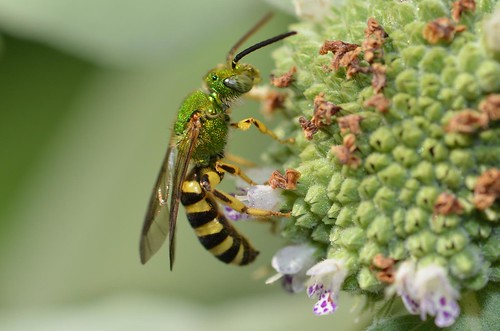 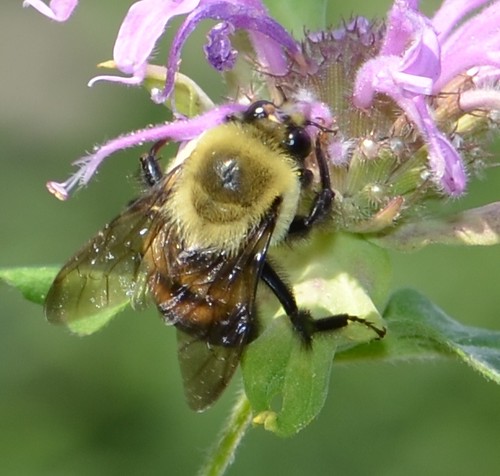 Coelioxys, Cuckoo Bee. I think I've got several species from the genus visiting my garden, but I've yet to get identification for the others. These are in the Megachilidae, the Leaf-cutter and Mason Bee family. Bees in this family typically carry pollen on hairs beneath their abdomens, instead of in pollen baskets on their legs. You can see this bee isn't carrying any pollen; it doesn't even have the hairs beneath its abdomen to do so. It doesn't need to, because it takes over the pollen-provisioned nests of other leaf-cutter bees for its own young. 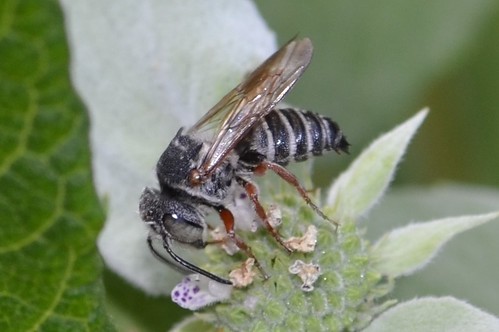 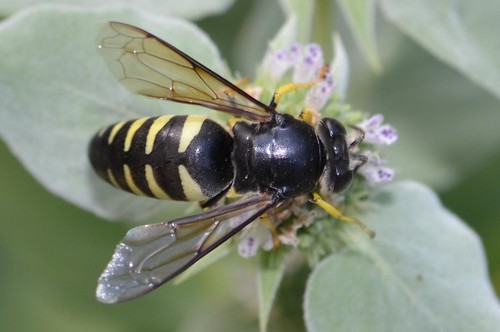 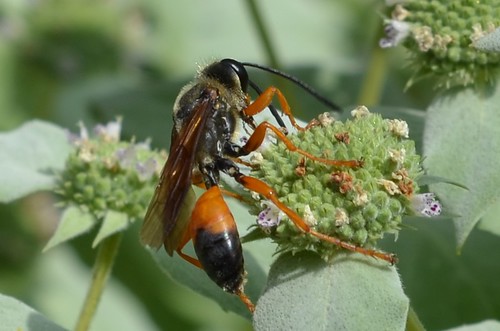 Along with the Hymenoptera come the mimic flies. Many of the seeming bees and wasps, seen from a distance, turn out to be flies on closer inspection. In "the field," i.e.: my garden, there are two features that provide quick distinction between the two familes:
The feet are also different, but I usually don't notice those until I'm browsing and culling my shots. Finally, bees and wasps have four wings, while flies only have two - Di-ptera, two-winged.

The Syrphidae/Flower-Fly family hosts countless mimics of bees and wasps. 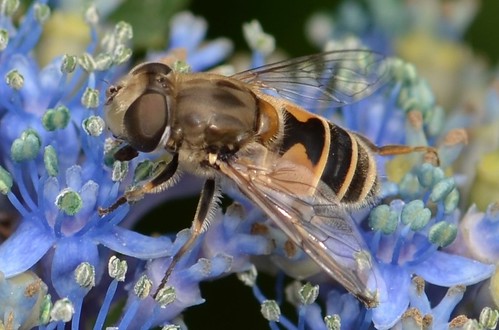 
Their tactics of mimicry are not limited to patterns and colors. Many species have evolved body modifications to mimic even the shapes of wasps and bees.

Syritta pipiens provides a good example of this. This is the most wasp-like fly I've found yet in my garden, though more extreme mimics exist. Glimpsed from behind as it moves quickly over the flowers, it could easily be mistaken for a tiny wasp.

Viewed from the side, or the front, Syritta is more obviously a fly, not a wasp, and a dedicated mimic.

Toxomerus geminatus sports a radically flattened abdomen. This seems to be an adaptation to present a wider area from above, as a predator might view it, for displaying its mimicry, while preserving a smaller volume and keeping weight down. 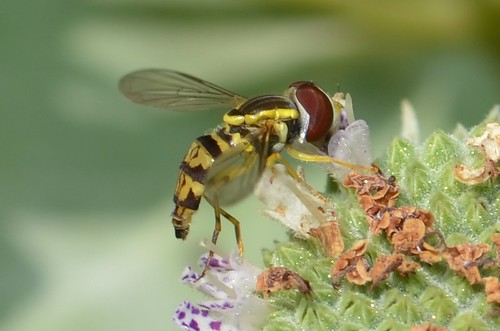 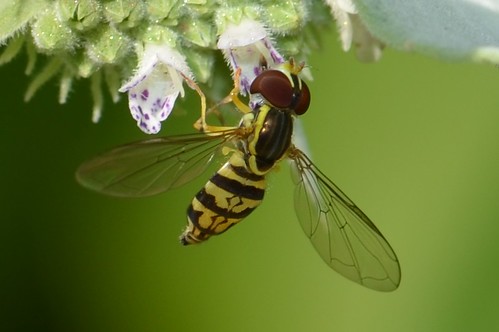 I wonder what they are mimicing? Might some of these mimics mirror actual target species, not just general "bee-ness" or "wasp-ness"? If so, I would expect to find both the mimic and subject in the same range, and exhibit the same phenology. For example, Toxomerus bears a resemblance to Agapostemon at a quick glance.

This is my setup for doing live insect macro photography "in the wild," i.e.: in my garden. The lens is a specialized macro lens that allows for an extremely close focusing distance, though I'm not taking advantage of it in this example. I target some flowers with lots of insect activity, in this case, a local ecotype of Monarda fistulosa, in the Lamiaceae, the Mint Family. Then I wait for insects to visit the flowers, within range of the camera. 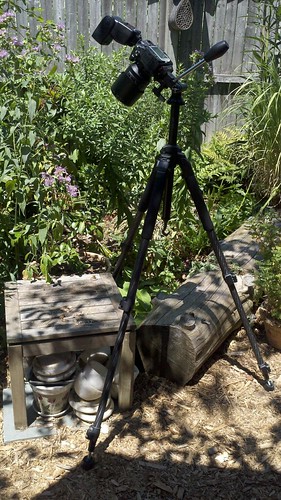 I use the tripod handle to pivot up and down; it turns side-to-side easily. Ease of rapid movement with stability is critical, as the insect subjects move rapidly over each inflorescence, and from bloom to bloom. Still, the tripod only steadies my own shaky hands. The insects, of course, are moving, but so are the plants, which sway with the slightest breezes. A fast auto-focus helps; a quick hand is still needed when automation fails.

The mobility allows me to track a single insect as it moves around, and capture different shots, and perspectives, on the same individual. This is critical for identification, since I don't know until later what the key features to look for might be. It's often some tiny detail, only revealed from some obscure angle, that distinguishes the species.

My subjects, while largely oblivious to my actions, are not cooperative. I have to shoot hundreds of photos to get a few good shots that are in focus, free of motion blur, and have enough of the right details to identify the species, or at least narrow down to the family. This was never possible, or at least not economically feasible, before digital photography.

The bug geeks at BugGuide are awesome. Only through their generous sharing of knowledge and expertise have I been able to identify my little visitors. They cover the United States and Canada.

The international Xerces Society for Invertebrate Conservation has lots of information about gardening - and farming - with insects in mind, especially native bees. Their book, Attracting Native Pollinators: Protecting North America’s Bees and Butterflies, is outstanding.
Posted by Chris Kreussling (Flatbush Gardener) at 7/31/2011 11:29:00 PM

Excellent shots, Chris. Very true about "if you plant it they will come," but on their own sweet time.

wonderful shots! I'm using a Canon Rebel x5 and have thought of looking into macro lenses; any suggestions?

Beautiful beautiful photos. I recognize one or two wasps from my own garden, so thanks for the ID's. Without a macro or a really good camera it's often hard to capture those critical details for ID's. I struggle with my own point and shoot. But the fun really is all in the learning process, in the looking closely at these small things and the hunt for the clues to ID. I'm not a teacher, but I could see how the process of photographing and ID'ing would translate well to that field.

Wonderful photographs! I, to, have seen some of these on our wildflowers from time to time. I'm bookmarking this post for future reference for IDs. Thanks for sharing your technique for photographing them.

Great photos. I'll certainly look more closely at insects in my gardens this spring. Thanks.