Note: I'll continue to update this as I learn more.


Magicicada is the genus of the 13- and 17- year periodical cicadas of eastern North America. These insects display a unique combination of long life cycles, periodicity, and mass emergences. They are sometimes called "seventeen-year locust"s, but they are not locusts.
- Magicicada, Wikipedia

Periodical Cicadas appear earlier in the year than our regular, annual "dog-day" Cicadas, which don't show up until later in the summer. If they are still here, we should begin to see signs of them now, certainly by the end of May. They can be readily distinguished by their red eyes (dog-day Cicadas have black or dark brown eyes), darker bodies, and smaller size. For comparison, here's a photograph I took of a dog-day cicada, Tibicen canicularis, in my backyard last October. 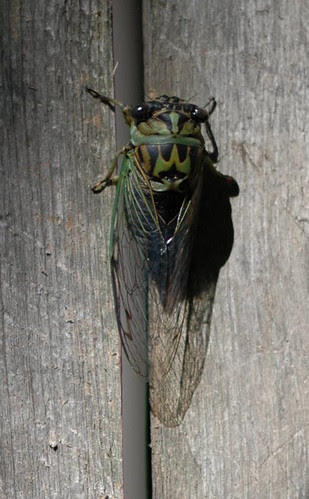 17 years ago, in 1991, I still lived in the East Village in Manhattan. We didn't have them there. I didn't move to Brooklyn until the next year, 1992, so I just missed the last cycle. They won't be here again until 2025. I'm hoping - yes, hoping - that I'll be in the thick of things here: detached houses, lots of open ground, and just a half-mile or so from Prospect Park.

Periodical cicadas are identified by broods categorizing the species, cycle, and years and range of a particular emergence:


In any given area, adult periodical cicadas emerge only once every 13 or 17 years, they are consistent in their life cycles, and populations (or "broods") in different regions are not synchronized. Currently there are 7 recognized species, 12 distinct 17-year broods, and 3 distinct 13-year broods, along with 2 known extinct broods, found east of the Great Plains and south of the Great Lakes, to the Florida Panhandle.
- Magicicada Mapping Project

Brooklyn is part of Brood XIV (Brood 14), one of the 17-year broods. We can expect to see (and hear) any or all of the three 17-year species in Brood XIV:

All three species are on the IUCN Red List of Threatened Species as low risk, but near threatened, ie: close to being "promoted" to vulnerable species. Because they spend most of their lives underground, periodical cicadas are at risk from development which covers their routes to emergence at the surface. When they emerge, without sufficient woody plants - trees and shrubs - upon which to feed and lay their eggs, that generation will be irreversibly reduced for at least another 17 (or 13) years. Some broods are already extinct. Consider, for example, this observation from an unidentified entomologist:

Have you an ideal of the absolute in hopelessness? Well, let it be said that the house in which you live is comparatively new - built within 17 years. The ground on which ti stands was originally woodland. In the Summer of 1902 all the tree thereabouts were full of seventeen-year locusts. Eggs were deposited in the branches, the larvae came out, dropped lightly to the ground, and dug in. The long period of subterranean existence is almost ended. In the summer of this year the insects will start toward the light and air - and will come in contact with the concrete floor of your cellar! There may be another situation as hopeless, but certainly none more so.
- New York Times, June 23, 1919

If you see or hear periodical cicadas, you can report your observations online. The reporting page has photos so you know what to look for. Adult periodical cicadas are easily distinguished from our annual, "dog-day" cicadas by their red eyes, as shown in the lead photo above. The species pages, listed above, also have audio recordings so you know what to listen for.

Fantastic job on this topic, Xris. Hope I see some of the little red-eyed dudes; they look like something from a post-apocalyptic horror comic! (And who doesn't want those around in June?)

Thank you for this post, I am terribly excited about the Magicicada, what a name! Listening to their song is unlike any thing else. I'm tuning my ears to that station in anticipation.

Got home last night around midnight and saw 10-15 Cicadas on my front walkway and steps.

Brenda: Thanks! Any signs of them in Prospect Park, or near your home?

amarilla: Still no signs of them here. How about you?

Mike: Great! Whereabouts are you? Feel free to email me, if you don't want to leave the info in another comment.

I don't know if we're supposed to see them up in Sunset Park. Are they missing in action? I haven't seen or heard any sign.