Handing out shopping bags at the NYC Wildflower Week table at Union Square. 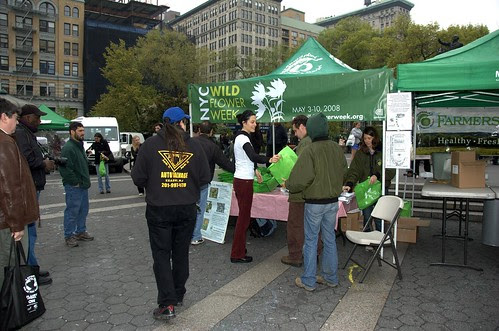 First thing last Saturday, May 3, I went to Union Square in Manhattan to attend the kickoff of NYC Wildflower Week. There was a table where volunteers and Parks staff handed out tote bags with information about native plants. I didn't get to stick around for the tours of the native plant garden in Union Square Park. The highlights for me were meeting Marielle Anzelone, Parks Ecologist, and the opportunity to acquire local ecotypes of six native plant species from Oak Grove Farms (changed to Nature's Healing Farm), one of the Greenmarket vendors:
Local ecotype native plants for sale at Oak Grove Farms' Greenmarket stand 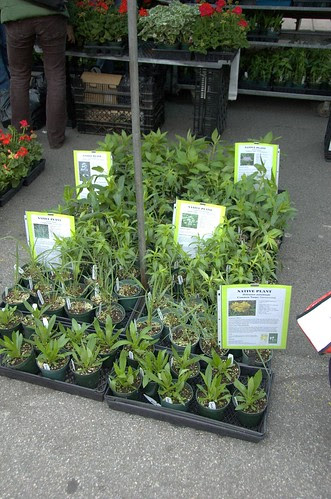 A native plant species is one which grows naturally without human intervention. "Native" is both broad and relative. Native to where? And to what habitat? What ecosystem? Native to North America? The eastern United States? The Mid-Atlantic or New England? Is it native to New York City? To Brooklyn (Kings County)? Are they native to the "wooded plains" from which "Flatbush" got its name?

Most native plants commercially available, especially at the retail level, are selections or cultivars of species. Selecting for more compact forms is common, but selections are made for many reasons: the color of flowers, fruits or fall foliage, for example. In other words, they've been selected for their horticultural rather than ecological value.

Local ecotypes are not just geographically distributed. Other important factors are differences in moisture, exposure to sun or shade, extremes of winter or summer temperatures and humidity, and so on. Ecotypes may also differ along these ecological gradients.

In the United States, native plants are enjoying a resurgence in interest and popularity. For the gardener, making choices about native plants comes down to examining and expressing one's reasons for wanting to grow native plants in the garden.

Growing native plants feeds my curiosity about and interest in the natural world. It's a way for me to converse with the genius loci, the spirit of the place, where I garden. Most of all, I hope to provide food and shelter for native wildlife, especially birds and insects.

The native plant garden I'm developing in my backyard has a wide range of "native" plants. Many of them are selections and cultivars; some of these, such as a variegated pokeweed, would never persist in the wild. Others are not native to New York City, or even New York state, but to larger ecological provinces such as New England or the Mid-Atlantic Coast.

From growing native selections and cultivars over more than 20 decades, I've learned from experience that wildlife value is often reduced or even lost when native plants are selected for their horticultural merits. I've grown several different cultivars of Lonicera sempervirens, the native (and non-invasive) trumpet honeysuckle. Hummingbirds have shown little interest in any of them; they may be drawn to my garden by the shape and color of my honeysuckle's flowers, but they feed on other nearby plants, if they stay at all.

Which is why I've always sought local ecotypes of native plants. Unknown millenia of co-evolution with local conditions and other species is encoded in their genetic material. If I want to garden for wildlife, I can do no better than attempt to recreate a microcosm of the natural world where I garden. 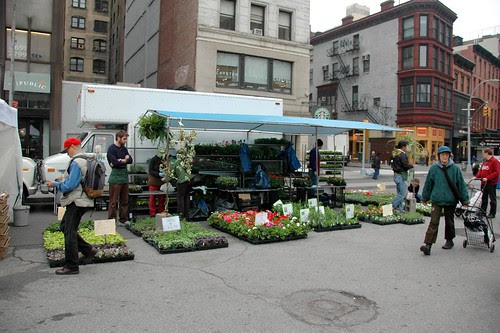 Oak Grove Farms, from Clinton Corners in upstate New York, is one of the founding members of the Greenmarket in New York City.


Oak Grove Farms is a family owned and operated nursery in the Hudson Valley. It was started by Lenore & Herman Carvalho as Carvalho Greenhouses over 30 years ago! Their son Tony joined them almost as soon as he could walk and carry a hose.

The farm was renamed Oak Grove Farms about 10 years ago, after the Carvalho name sake: Carvalho means Oak in Portuguese ...

Herman and Lenore, are ready to retire now, so Tony, and his new wife, Andrea are picking up the reins. Together they hope to expand, the nursery into a real organic farm, with animals and crops!
- About, Oak Grove Farms

A final note: never remove plants from the wild. This is poaching.

Ask your sources how they obtain their plants. Early in my urban gardening, I ordered some plants for the wildflower section of the East Village garden. When they arrived, they clearly had been collected from the wild. Removed from their natural habitat to garden conditions, several of them didn't survive the first year. I might as well have planted cut flowers. I've regretted those purchases ever since.

Find and support nurseries and growers that are propagating and growing their own plants. That's the best way we can increase the demand for ethically-propagated native plants, foster their availability from commercial sources, and protect them in the wild.