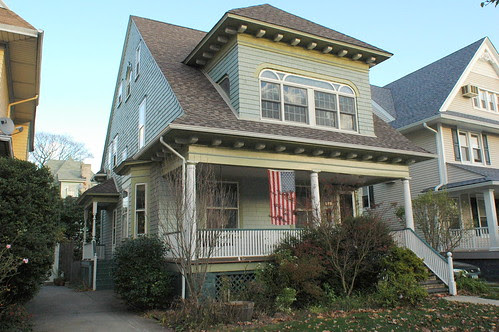 This was just a bullet in my listing of upcoming local events earlier this week. CB14 has scheduled a preliminary public hearing of DCP's proposed zoning changes for the northern half of CB14, ie: Flatbush, for Thursday, June 12, 2008 at 7pm at Public School 249 at the corner of Caton Avenue and Marlborough Road.


Brooklyn Community Board 14 has scheduled a preliminary public hearing to receive public input in the matter of the New York City Department of City Planning’s Flatbush Neighborhood Study proposes to make certain changes to the zoning map in the Flatbush section of Community District 14, which includes Coney Island Avenue to the west, Caton Avenue/Parkside Avenue/Clarkson Avenue to the north, Bedford Avenue/Nostrand Avenue/East 32nd Street to the east, and the LIRR tracks to the south.

I've sketched a preliminary map of the study area based on this description and the boundaries of CB14.

DCP won't publish maps or other details until their formal submission of the proposal to the ULURP process. Here's what I know abut the latest draft of the proposal:

DCP's justification for the R4A designation is that a larger percentage of existing structures within DPW would comply with R4A than R3X. Residents of DPW have started on online petition to call for the R3X designation instead:

We, the residents of Ditmas Park West and its environs, petition the City Planning Commission to adopt the R-3X designation as they consider rezoning. This would allow only one and two family detached homes and limit the floor-area-ratio to 50 percent. We feel this is the ideal designation to preserve our neighborhood as built.

I agree. I signed the petition with the following comment:

R-3X more accurately reflects the built environment of Ditmas Park
West (DPW) than either the existing R3-2 or the proposed R4-A. It
would also be consistent with the R3-X proposed for Beverley Square
West, where I live, which lies immediately north of DPW on the other
side of Cortelyou Road.

I believe that DCP's measure of "compliance" is based largely on lot widths and existing expansions of homes, even if those expansions were not done in compliance with the zoning already in effect. In addition, with the Yards Text Amendment, the difference in zoning between R3 and R4 will have impacts not just on housing construction but on open space between buildings and the streetscape, properties which define neighborhood character at least as much as the homes themselves.

There's an article in Flatbush Life, but the new Your Nabe Web site is not making it available. Boycott all Murdoch media.
Flatbush Rezoning Push Not Sitting Well With Some Locals, Brownstoner, May 23, 2008
Rezoning Victorian Flatbush, Ditmas Park Blog, May 21, 2008